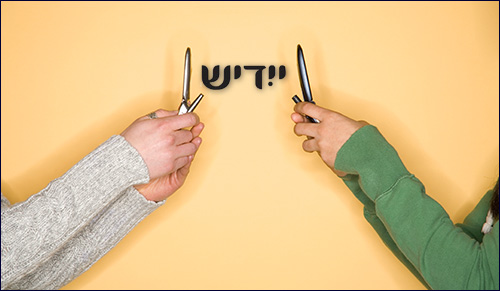 Forget LOL” How about WAICL for “What am I, chopped liver”?

Chances are if you think only a crazy person would put cream in his “Java” you’re a Jewish Young Adult (JYA) who may know a “bissel” Yiddish such as “Chutzpah,” “Yutz,” “Mazel,” “Schmendrik,” and “Shmutz.” But, you’ll sit in wonder as old Jews fall down in hysteria when Tanta Bella, after a half an hour setting up a joke in broken English, gets to the punchline … “And sooo … God finally said to Pishnik who bugs Him 12 times a day … Hak Mir Nit Kain Tsheinik!

I’ll put you out of your misery. It means: “Don't bang on the tea kettle.”

Wait. Was Lipton’s even mentioned? No. But Yiddish speakers had the remarkable ability to create similes and metaphors that came at you sideways and backwards – especially when they apply to the annoying or idiots.

So what’s with God and tea pots? Sit and learn, mamalas. Banging on a teapot makes a noise that could drive a person meshugge. So getting back to the joke, God really told Pishnik, “Oy, enough. Quit bothering me already!!” See it?

I ask you, is this clever or what?

Now, imagine the beauty of texting your friends and foes using Yiddish expressions! Not only are we talking a different language, but one with meanings that no one but the CIA or a Jew could figure out.

For example, say you started texting a person who seemed sane until he shares with you his hobby: “Highways.” Five times a day he texts you the vital statistics of the Williamsburg Bridge. You need this? He’s also a doctor, and in therapy so once a week you’ll consider.

In regular text you might for example write: IGTP (I get the point), or more to the point, SUYF (Shut up you fool!) How much more heimish (convivial) to instead text the above Hak Mir Nit Kain Tsheinik or HMNKT? Far more finesse.

So, for you my darling JYAs, I suggest you text – in Yiddish. Yes. Not only will you be able to not say exactly what you mean, but as few will understand the depth of your response, you could go viral from the questions alone.

TEXTING IN YIDDISH: A CRASH COURSE

YIDDISH PHRASE: A Gezunt Dir in Pupik
LITERAL MEANING: Good health to your belly button.
TEXT: GDP
DEEPER MEANING: “You should only have good health.” It’s a blessing. Why “belly button?” If no one cut it where would you be? (OK, mamalas, some of you may still be attached to a cord mama could use as a lasso, but why announce it?)

USAGE: You love your roomie Rhoda even though she says she’s been sick since that wasp bite at Camp Kapporah when she was five. Between her Q-Tip allergy to her zit affliction that flairs when in any city with a zoo, she’s a whole chapter in the Handbook of Jewish Diseases. Your text, GDP, not only shows you care if she has a bulke on her nose, but God-willing she’ll quit shnarfling.

SECOND USAGE (Sarcastic): Melvin Weiner is a whiner. For two weeks he’s been complaining that he thinks his roomie, Meyer’s humming is giving him indigestion, even though you told him it could be the two pounds of chopped liver he downs for lunch, but by texting GDP, he thinks you’re wishing him good health, especially if you add an . Much classier and highly confusing. Plus, with this ploy you’ll get rid of your indigestion.

YIDDISH PHRASE: Gehakteh Leber:
LITERAL MEANING: Chopped liver
TEXT: CL? OR WAICL? (What am I? Chopped Liver?)
DEEPER MEANING: We Jews have a deep connection to this dish that shows up on every buffet, wedding, and nosherai. Face it, it’s cheap. You won’t find chopped liver as a gourmet basket ingredient on the Food Network. So unless you’re serving it, you’re comparing it as in, “You’ll try bog snorkelling with her but not me? What am I? Chopped liver?!”

USAGE: You met an interesting prospect on YoungJewsMeet (YJM). He tells you he’s going on a trip. You ask where and he says that YJE (Young Jewish Events) is sponsoring a tour of Jewish Art in Pahrump. Six are going. Does he ask you? Attach a brochure? No. Texting WAICL? tells him you’re eager, annoyed, but not desperate. Much better to keep your dignity than to text W/E (whatever), IDC (I don't care), YS (you stinker), followed up by WYCM (will you call me?), all of which makes your loserosity as attractive as goat droppings.

YIDDISH PHRASE: A Vue Shtet Geschreiber
LITERAL MEANING: “So, where is it written?” “Who says it's so, you?”
TEXT: VSG
DEEPER MEANING: This yutz, Joel Plotsky, thinks because he went to Harvard Business School (after his father donated The Plotsky SCAM wing) he’s suddenly an expert on the history of the baseball. Meanwhile, he was thrown out of Little League. Oy, not only is he a bigmouth but he knows nothing and makes up what he doesn’t know, such as “The baseball is a Jewish symbol from which came the matzo ball.” When you question, he mentions HBS. Since when did Harvard Business School start teaching “The Relationship of Baseballs to Matzo Balls?”

USAGE: Of course there are at least 20 text abbreviations for “lying idiot.” But, his father, the macher, happens to have gone to P.S. 89 in Brooklyn with your father (who sells fresh fruit) and is helping you through pharmacy school. This calls for sensitivity. Trust me, mamalas, texting VSG is not only not offensive, but makes you look like a Jewish scholar which will put Mr. Bigmouth nicely in his place but is an important skill when someday you’re giving drugs to people.

If you have any Yiddish texts feel free to include them in the comments section below. Until then, stay tuned for Part Two!