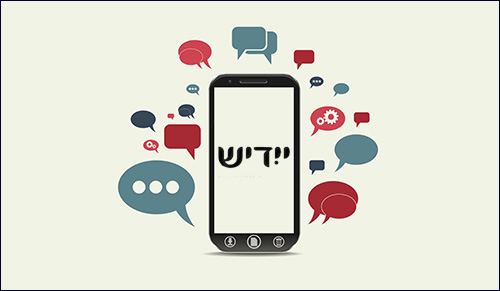 DMGK = Darf min gehn in kolledj or “for this I went to college”?!

You’re a JYA, a Jewish Young Adult. You know from “Oy Vey.” But did you know that “Oy Gevalt” kicks it up a notch?

Sheila: Irving, the IRS is auditing.
Irving: Oy vey.
Sheila: They found something. You wrote off the $74, 000 Lexus which you put in our son’s name.
Irving: “Oy Gevalt!!”

Do you know your “oy veys” from your “oy gevalts”?

The majesty of Yiddish phrases is that they hit the mark in a way no English expression can (think chutzpah), and as metaphors or similes, they have deeper meanings that can be applied in almost any situation when:

This is why I’ve started a mission to get JYAs texting in our majestic language (click here for Part I in this series). Trust me, mamalas, you’ll not only learn Mamaloshen but your convos will convey a mystique, a beauty, a sensibility – and you’ll get your messages across with sensitivity, especially when you might actually need the yutzes you’re texting.

TEXTING IN YIDDISH: A CRASH COURSE

DEEPER MEANING: Since you were eight, you always wanted to join the circus. You collected brochures from Clown Colleges, and wore size 24 blue and red shoes when no one was around. Your parents sent you to shrinks from Scarsdale to Switzerland, but your heart fluttered at the sight of orange hair and elephants. Finally when the family had a Jewish intervention that involved sticking all their heads in the oven, you relented and went to CC of M (Community College of the Meshugass) where you spent four years studying Early Viking Literature.

USAGE: After graduation, could you get hired? Nu, how many jobs are there for people who know the futhork runic "alphabet" or that Olaf The Elder wrote (translated) “A Slice of Ice is Nice?” None, that’s how many. Even in Iceland, Olaf the Youngest is teaching that course. Upset, you applied to Kosher Knish U so you could at least wear a funny hat while asking, “Do you want the kasha?” How much better to text your parents DMGK than something sarcastic like AHA! After all, you need them to pay the rent on your studio while pursuing your career – handing out menus.

DEEPER MEANING: OK, admit it. Sometimes we’re a little obnoxious with the questions and opinions. Then there are times others beat you to it. Who doesn’t know a person who, say, if you bought a knock-off, they have to know what you paid and how they got it cheaper, or when you find a prospective bashert, they tell you his ears were pinned back? But God forbid you should ask her to tell you her GPA! The versatile WEM or WEXM! Is perfect for either person or situation. Watch …

USAGE- WEM: Your friend Rona, who is visiting Israel texts you that she just saw your ex (who rejected you) in a kibbutz. Before she goes on, you say: “And you talked to him?! Some friend you are!” Her answer? “I told him that you’re now thinking of modeling with Bar Refaeli!” Oy. Not only are you wrong, you’re an interrupter. That’s a sincere ExM.

SECOND USAGE-WExMMMMi! (Sarcastic): Suppose she adds “In fact, I also told him that you had your teeth fixed, a nose job and lost 30 pounds on diet of gefilte fish. He wouldn’t even recognize you.” Wait … back up. “How dare you!” you say. Her answer? “WExMMMMi! for trying to make you look good.” All of which proves, it’s better to assume the worst and be an interrupter.

DEEPER MEANING: Go! Get outta here! Get lost! How dare you?! I need you like a hole in the head! Never darken my digitals again! Such a thing requires not just regular chutzpah on your part, but HC (High Chutzpah)!

USAGE: Someone found/looked/hacked you on FleeceBlinked, the person you met on online JYAMeetups is dying to teach you the beauty of Farsi or some gonif is texting you night and day, sending e-mails, calling with area codes that can only be found on an island near a 4th world nation saying you should partner with them in pig farming and clean up. Does this not shtink like fish? Texting GFAY! will not only confuse this thief, but the abbreviations might be taken to mean you’re a G-FAY, a secret government operative in charge of “Ferreting Artificial ‘Yews.’”

YIDDISH PHRASE: Nifter-shmifter, a leben macht er
LITERAL MEANING: Even if he’s dead, what difference does it make as long as he makes a living.
TEXT: NSLM

DEEPER MEANING: We Jews adore a little exaggeration, especially when it comes to death. True, if he’s no longer with us, he’s probably unemployed, then again, insurance may be involved … trust funds … maturing bonds … a wall safe. But never mind. We’re assuming he’s alive, but he drives you crazy. Yes, but does he make gelt?

USAGE: You tell your mother you met a single young man at services. She chaloshes from joy. You try to explain he not only bores you to death, he has 21 cats he won’t part with for which he has a kitty-sitter as he owns dental clinics which keep him busy. She texts you NSLM. Later she calls and says your father’s a philosopher who makes bupkes. Better the cats and the boring than a life of fake Kosher spam.

So my darling JYAs … start off with these, and should someone text you IHA I hate acronyms, by all means, give them the whole megillah – in Yiddish.

How to Start a Diet