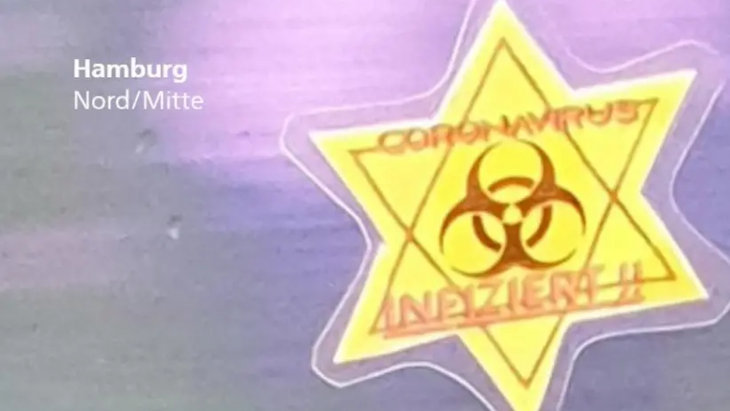 Like the Black Death, some people are scapegoating the Jews for the coronavirus.

It is a story that dates back centuries. A crisis occurs and conspiracy theories emerge to offer one-size-fits-all explanations. More often than not, Jews are implicated. So, too, has it been during the COVID-19 pandemic.

The 14th century Black Death killed tens of millions across Europe. For many, it was more convenient to blame the Jews – and murder thousands, from Barcelona to Frankfurt, in so-called retribution – than to understand science.

The basic anti-Semitic motif is usually the same. Jews are believed to possess demonic power and evil intent. Small in number, perhaps, but Jews are globally connected and act as one. The goal? To outsmart non-Jews, gain wealth and power, and control the world’s destiny.

The inherent absurdity of these beliefs does not matter for the anti-Semites.

Thus, Jews can be simultaneously accused of promoting capitalism and communism – two polar opposite ideologies.

The infamous “Protocols of the Elders of Zion,” a 1903 forgery by Czarist Russia’s secret police, asserted that Jews seek global domination. In fact, Russian Jews cowered in the restricted Pale of Settlement in fear of the next wave of state-sanctioned pogroms.

Adolf Hitler ascribed demonic powers to the Jews. He blamed them for Germany’s defeat in the First World War, for its alleged humiliation under the terms of the Versailles Treaty, and for sabotaging National Socialism. The reality, however, was that Europe’s Jews were powerless, targeted for genocide, and ultimately murdered by the millions.

Fast forward to September 11, 2001. No sooner did the four terror attacks occur than conspiracy-mongers were again active. While many Jews were among the victims, the Israeli Mossad was blamed. It purportedly notified 4,000 Jews working in the World Trade Center to stay home that fateful day. Again, the Jews were seen as interconnected, all with one goal of orchestrating monstrous deeds and pinning the blame on others, in this case Arabs.

Now during the COVID-19 crisis, conspiracy theories are again rife. What makes them especially dangerous are two factors.

First, there is the reach of digital platforms. Those on the receiving end include people who are predisposed to conspiracy theories and feel empowered by them, as well as the impressionable who may not have the critical skills to separate fact from fiction.

Second, this global crisis has brought much of the world to its knees in unprecedented fashion, quarantining vast numbers, fueling unemployment and shifting more power to governments.

For the anti-Semites, all the elements are aligned: Through devious machinations, Jews surely brought this on the world to gain power, wealth and control.

That countless Jews have died of the coronavirus, that Israel was brought to a standstill, or that Jewish-owned businesses face the same uncertainties as all others may be demonstrably correct, but are irrelevant in the netherworld of anti-Semitic conspiracies.

The language of Hitler is invoked, including against the governor of Illinois, J.B. Pritzker, who is Jewish, accusing him of consolidating power and restricting others’ freedom. “Arbeit Macht Frei” (Work will set you free), one protester’s sign directed at him said, referring to the notorious three words at the entrance to the Nazi camp at Auschwitz. A quite similar incident occurred in Colorado involving the state’s governor, Jared Polis, who is also Jewish.

Meanwhile, the FBI killed a white supremacist in a shootout in Kansas City, on March 24, shortly after he posted that “this whole thing [COVID-19] was engineered by Jews as a power grab.”

Not surprisingly, given its hatred of Israel, Iran’s Press TV said that “Zionist elements developed a deadlier strain of coronavirus against Iran.”

As Israel was offering help to the Palestinian Authority to battle the pandemic, a step applauded by United Nations officials, Palestinian Prime Minister Mohammad Shtayyeh, in a press conference on March 29, declared: “We have heard testimony that some [Israeli] soldiers are trying to spread the virus through the door handles of cars.” In years past, Jews were accused of poisoning wells. Now it’s car door handles.

History has shown that these kinds of allegations, however outlandish, can have real-life consequences.

The trifecta of the search for scapegoats, whether by political leaders, groups or individuals, the unbridled power of technology, and the red-hot anger among some about drastic changes to their lives, is potentially toxic. Its possible consequences should not be underestimated.