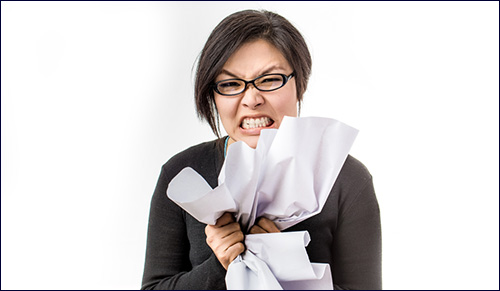 My negative encounter with an airline agent.

We were dropping off our son (the baby of the family!) at LAX; he was on his way to Israel for the year to learn. He had never been away from home and he was a little nervous. Okay true confessions: He was fine; I was a nervous wreck! So we did have a few questions for the agent. Since there was a stopover, I politely asked if his bags would be checked all the way through.

“Since he’s the one flying, I’m talking to him not you!” the customer service representative snarled.

“Since I’m the one buying the tickets I am technically the client and it would be in your airline’s future best interest to address me,” I wanted to answer. But I remained silent.

Until another question popped into my anxious head and out of my tense mouth. But I still asked in a polite and calm fashion. This time she ignored me altogether.

When our son was finally checked in (and probably counting down the moments until he would be free of his embarrassing parents for months to come) my husband (with the same calm demeanor) mentioned to our cheerful rep that “Courtesy comes at no extra cost.”

“Well I can’t think with you two yelling at me!” she shot back.

“Yelling?” I thought. “I’ll show you what yelling is!” But seriously, we never raised our voices, even slightly. Nor did we betray our agitation. It was very crowded and disorganized and she was clearly overworked, but we were a little shocked to be the target of her frustration and animosity.

I kept thinking about what my husband said (as I kissed my son goodbye and tried not to completely humiliate him by breaking down and sobbing) about the low price of courtesy.

Were there times in my life when I hadn’t adhered to that principle? Did the whole incident happen just to remind me? I try not to get frustrated when waiting in lines, when the sales rep is incompetent, when I brought the wrong receipt…but maybe I haven’t been as successful as I thought. Either way I’m redoubling my efforts because being the recipient of someone else’s bad mood and nastiness is extremely unpleasant. It throws off your day.

I do think I wait patiently in lines, perhaps from an awareness that I am identifiably Jewish and don’t want to attract negative attention. But what about at home? Where no one is watching but my husband (and of course the Almighty)? Am I so careful there? Courtesy is free at home as well but I’m more inclined to let my guard down, to be a little less polite, a little less patient, a little less considerate. To not be as careful to modulate the tone and tenor of my voice. To speak less quietly, calmly, thoughtfully.

So I guess the airline agent did me a favor. (Boy would she plotz if she knew that!) She refocused me on the need to treat those I love with particular care and concern – and courtesy! It’s easy to be polite to strangers (although I guess she didn’t think so) but so much harder with family. It’s easy to focus on her negative behavior instead of mine. I don’t know if in the end she thought more about our encounter and if my husband’s words penetrated and made a difference. I just know they did for me.

You've Got a Friend
The Blue Beyond
Great Place to Live
Is Eating Supposed To Be Spiritual?
Comments
MOST POPULAR IN Family
Our privacy policy