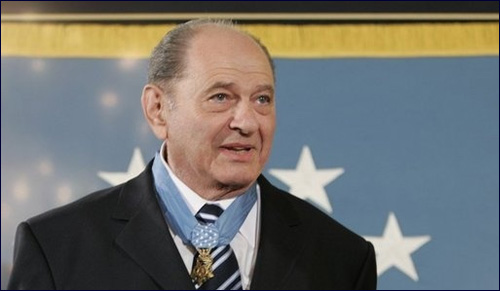 An anti-Semitic sergeant couldn’t stop a Holocaust survivor who heroically served in the US Army from getting his Medal of Honor.

The Nazis were fleeing. The American troops were getting closer and closer, the sounds of their tanks and soldiers echoing towards the exhausted survivors.  What was that moment like? We might think that it was a moment of joy, of relief, of freedom. But for most Holocaust survivors, that moment of liberation was one of anguish and disbelief.

Now? They whispered to themselves. >Now it’s over? After I have lost everything? What for? It’s no longer possible to live. After losing their families, their homes and their last hopes that they were not alone in this world, these survivors walked out of the concentration camps and had to not only completely rebuild their lives, they had to find a reason to live at all.

Some of them succumbed to despair and died soon after the liberation. But most survivors did the unimaginable. They took off their prison uniforms. They rose up from their grief, and they chose to live. Their children, grandchildren and great children are all alive because they somehow found a way to hope, to believe, to begin again.

I was recently sent an unbelievable story told in the memoir Single Handed by Daniel Cohen. It is the story of a teenage boy, Teddy Rubin, who lost his parents and his siblings in the Holocaust and stood all alone at the gates of the Mauthausen concentration camp, watching the American troops come closer and closer to the weak and despairing survivors who could barely stand up long enough to see the miracle weaving its way toward them. Teddy leaned against the fence. He could have given into the anguish and the darkness. He could have sat down and said to himself: >Now they’re here? Now? After I have lost everything?

But he didn’t. Instead Teddy looked up at the soldiers with tears of gratitude streaming down his face. And instead of wondering how he would live now when he had no family, no home and nowhere to go, Teddy made a promise right then and there: I’m going to give back. When I get out of here and get strong again, I’m going to join the American army and pay back this debt. They saved me from this nightmare. I want to save others.

Tibor “Teddy” Rubin arrived in in 1948 and worked first as a shoemaker and then as a butcher. In 1949 he attempted to enlist in the US army to fulfill the promise he had made when he was liberated. But Teddy failed the English language test and was rejected from the army. Undeterred, he tried again in 1950 and finally passed and volunteered to serve in the Korean War.

Rubin’s troop was commanded by an anti-Semitic sergeant who couldn’t care less if the Jew lived or died.

Unfortunately, Rubin ended up in a troop commanded by an anti-Semitic sergeant who couldn’t care less whether the Jewish soldier with the foreign accent lived or died. So the Sergeant commanded Teddy to single-handedly guard an ammunition dump on a hilltop in Korea while the rest of the troops traveled on to safety. Terrified and abandoned, Teddy thought about the promise that he had made. He stood alone and fought courageously in the darkness all night long.

When the Sergeant saw that Rubin had survived and fought off the enemy troops, he didn’t acknowledge Teddy’s actions. The Sergeant continued to dismiss Rubin’s incredible acts of bravery like crawling across a battlefield to rescue a wounded comrade he barely knew.

In November of that year, after having twice been denied the Medal of Honor by the same Jew-hating Sergeant, Teddy was captured by the Chinese communists and imprisoned in a camp along the Yalu River. Did he lay down in his prison cell and give up then? Did he wallow in self-pity and fall apart? No, Teddy decided to use what he had learned during the Holocaust to keep himself and his fellow prisoners alive. During the next two and a half years, Teddy escaped countless times, risking his life, in order to raid local farms and feed his starving fellow soldiers. He nursed them. He encouraged them using whatever English words he had learned. Eat. He told them. Drink. Your family is waiting for you. You will go home. This will pass. He saved them.

When it was all over and Teddy returned to America, he remained silent about his heroic acts and went about living an ordinary life.

Fifty years later when Rubin was finally awarded the Medal of Honor that he deserved so many years before, Teddy said, “I had a debt to pay. So I made a promise. I was just a little Jew, coming back from the most terrible place. I never knew that I was going to be a super Jew. No, I’m not super. I’m just a regular guy. But I have shalom, peace, because I was not just a soldier, not just a funny talking Jew, I was there when they needed me.”

What was the secret to Teddy’s courage? How did he stand upright at the gates of hell and feel grateful? How did he find the strength to make a promise then and not stop until he fulfilled that promise? How did he stand all alone on a hill top in Korea with enemies all around him and not lose his faith?

Even when he had lost everything, there was a part of him that still clung to hope.

Teddy never gave up on God, even in his darkest moments. Even when he had lost everything, there was a part of him that still clung to hope. In the memoir Single Handed, Daniel Cohen writes, “God again. Over the past seven decades the old man had prayed to, argued with and on occasion angrily cursed Him. In his lowest moment he’d sworn that if they ever met, he’d sue Him. Recently he’d pretended that He didn’t exist. But now He was back. For better or worse, God had followed him to the White House.”

This is the kind of faith we cling to in the depths of our grief. As the destruction and darkness of Tisha B’Av surrounds us, we are threatened by despair. We have lost everything. Our home. Our Temple. We have nowhere to turn. And so it is now, in the middle of the most anguish-filled day of the year for the Jewish people, when we are faced with the questions that come in the darkness. Do we stand at the gates of thousands of years of loss and say: Now? What for? What am I supposed to do if You leave me all alone for so long?  What am I supposed to do if You hide Your face and remain silent as I cry? Or do we instead find a light within us that still hopes. That feels gratitude and says thank You for the beating of even our broken hearts, for when there is life, there is hope.

Thank you, Teddy Rubin, for teaching us what a hero says in the heart-breaking moments of anguish and in the lonely moments when we don’t know how we will ever rebuild what we have lost, as you so poignantly repeated over and over again when you received the Medal of Honor: “There is a God.”

Can I Really Change the World?

Deep Center
Were Adam and Eve Jewish?
How I Learned to Love the Multiverse
10 Big Jewish Inventions
Comments