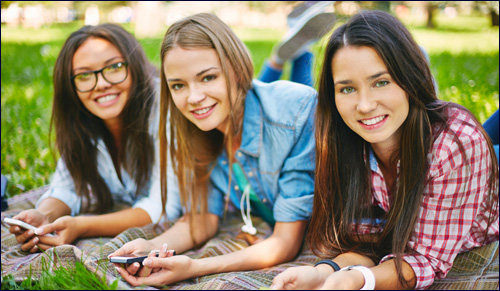 They say you never really leave high school. I think you can.

I recognized her right away. I also recognized the feeling. She had been part of a cool girl crew in junior high. I was not one of them. Sometimes I was outright teased, other times I was simply excluded. Now, in a room of women mingling and sipping cocktails, I suddenly felt like I was standing back on the junior high playground. I might have been an adult, but my nervous system was transported back to 7th grade, and with it, a flood of anxious, awkward get-me-out-of-here feelings.

I remember fantasizing about making it to class without being noticed, as if the best case scenario might be to blend right into the tiling, evading notice and avoiding the feeling of “otherness”. On some days, the cool girls were friendly, and I even felt part of their group. And so it went, as I tried my best to navigate the waters of junior high social circles.

Life went on. I found my group, and a place where I no longer felt “other”. The world and life expanded, as did my social circle and sense of self. But somewhere lingering in my cells was that time and those feelings.

I had pretty much forgotten that era of my life, until that evening last spring. When I caught sight of her it all came flooding back, and once again I felt awkward and unsure of myself. I tried my best not to make eye contact with her. I chatted with friends and sipped a drink, calling upon my adult sense of self. And then we ended up side by side in a group conversation. She seemed not to recognize me and I didn’t say anything. In that moment, I found myself inhabiting the younger me. I also slid into judging this woman as the girl of my adolescent memory.

We began to chat, as if we were two strangers meeting each other for the first time. She described her life: a career in transition, not-yet-married, searching spiritually. She had likewise grown up and had her own challenges. As we ditched the small talk and truly connected I realized that I had made her “other”. I had judged her into a high school corner before we’d even spoken.

Midsentence, she turned to me and said, “You look familiar.”

I paused. Maybe I didn’t need to hide. “I think I might recognize you too!” I dropped the name of our junior high.

“Yes!” she exclaimed, that was how we knew each other. We decided to keep in touch. We did. We have. But all along I’ve wondered if she likewise remembered those years.

This was an unusual opportunity. How often do we get to revisit our past with new eyes? Perhaps the playground of adulthood is not so different from junior high, where our judgments and insecurities can make the best of us a little anxious. Maybe this was my chance to rewrite the script with a new element in the mix: forgiveness.

I was holding us hostage to an old story. There were no cool girls. Just two people healing a long ago script.

So last week I asked her: “Tell me, what was junior high like for you?” She responded with one simple word: “brutal”. I didn’t understand. What could have been so brutal? She began to explain that it had been an equally difficult time in her life, when she felt uncomfortable in her skin. Without knowing her side, I was holding us hostage to that old story. It turned out we had both felt on the “outside”. And right there, in that moment, the Almighty was sending us a chance to rewrite the story. No cool girls. Just two people healing a long ago script.

The new storyline has no outsiders, only a leveled playing field where we are invited to show up as we are. This requires stepping out of the “I think I know who you are” judgments which can be hard when decades of labels and experiences cloud our vision. But that is where forgiveness comes in. The ability to let go of old hurts opens the door to new connections.

We’ve all had someone put us in the corner of otherness. We’ve likely also made someone feel on the outside – along social or religious lines, in the boardroom or the carpool line up: she’s wearing jeans, his kippa is too big, her skirt is too short. Becoming an adult doesn’t cure the ails of preteen insecurity unless we choose to forgive. Not because the past hurt didn’t happen, but because we want a different present.

I recognized her right away but it turns out she wasn’t who I thought she was. And in case you’re wondering how she feels about me writing this, she read it first. We’ve both decided it’s time to stop judging and start speaking. Then we might just find that the way we feel is pretty similar. We grow up but we still draw social lines, we size people up and put them in boxes. What we fail to see is that there is a place in everyone that feels a little bit on the outside.

But there is another way, where we liberate ourselves from the scripts of division. And it starts with seeing there really is no “in group,” there are no cool girls. None of us are “other”.