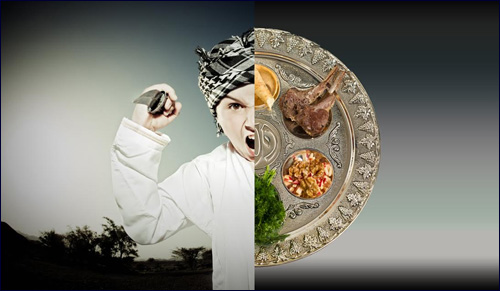 Both holidays focus on children. One celebrates life, the other celebrates death.

April is a month with two major holidays – one for Jews and the other for the Arab world. Both revolve around children. Both are very much concerned with the future. Both understand that what we teach to our young represent the values we most want to impart to the next generation.

That’s why it is so instructive to contrast them.

For Jews it is Passover. With profound insight, the rituals surrounding the festival commemorating the birth of the Jewish people focus primarily on our children. The moment we became Jews is best remembered by ensuring that we remain Jews. The past has become present; it now needs to be guaranteed for the future. How we accomplish that is the secret of Jewish survival.

A festive meal is celebrated in the home, surrounded by loving family. Family is the cement that binds us together to form a community of shared ideals and united beliefs. Love is its chief ingredient. And perhaps most important of all children are meant to feel that they are profoundly important. They are the ones to ask the questions. They are the ones scripted into the Seder at the very outset. The very name of the book for this holy occasion is the Haggadah – short for the biblical commandment given to parents for the service of the night of redemption, V’higgadata L’vincha – “and you shall tell over to your children.”

They’re taught that they are links in a historic chain leading to a messianic era of peace and love for all mankind.

Children need to know that their lives are precious and feel secure in our love. They are taught that they are links in a historic chain leading to a messianic era of peace and love for all mankind.

During the course of the Seder we share some of the most fundamental ideas of our faith. When we reflect upon the period of our slavery in Egypt and question what role this time of suffering served for our people we conclude, as the Torah tells us, it was to eternally carry within us the awareness of the evil of mistreatment of others – “because you were strangers in the land of Egypt” and you personally experienced the horrors of an unjust and unmerciful society.

We remember the ten plagues God visited on the Egyptians – yet even as we recall the divine afflictions of punishment on our enemies we accompany the mention of every plague with a remarkable ritual. With the cup of wine before us, with the use of a spoon or our finger, we remove a drop from the celebratory wine to express a powerful message: much as the plagues were deemed divinely necessary, we cannot feel complete joy at an event which caused others pain and so we indicate that “our cup is not full” when it is connected with the hurt of fellow human beings, even those who were our enemies.

Passover for Jews is a holiday which seeks to inspire the next generation with hope for a future peace and a vision of messianic coexistence and love.

And what is the vision of the day in April, April 5, the Arab world has chosen as Palestinian children’s day? One of the most successful child-training programs in the Islamic world is the Annual Palestine Festival for Childhood and Education held by Hamas in the Gaza Strip.

The children sought for this training are kindergarten/early elementary school children. In one of the events children, accompanied by teachers, act out plays before a large audience.

A diagram of the human body was shown with complete instructions about “how to stab a Jew.”

Last year, in one of them a veiled girl simulated a stabbing attack and children wearing uniforms simulated killing IDF soldiers and releasing Palestinian prisoners, i.e., Palestinian terrorists sentenced to jail terms in Israel. In another a diagram of the human body was shown with complete instructions about “how to stab a Jew.” There was one overall theme: indoctrinating children with hatred – hatred for the Little Satan Israel, the big Satan, the United States and violence against the infidels, nonbelievers around the world.

Children who represent the future are taught literally to choose death over life, violence over peacemaking, and martyrdom in jihadi attacks as the greatest act of heroism. Countless Palestinian parents support, encourage and praise the sacrifice of their children in suicide bombings and other terrorist attacks. Arab culture holds these child-soldiers in such high regard that parents accept the deaths of their children with pride. A public opinion survey conducted by the independent Arab-polling institute Jerusalem Media and Communications Center, found 68 percent of Palestinian adults support suicide bombing operations. The father of a 13-year-old says, “I pray that God will choose him [to be a martyr].” The father of another youth who carried out an attack outside a Tel Aviv disco declares: “I am very happy and proud of what my son did, and frankly, I’m a bit jealous.”

Financial incentives to families of suicide bombers also provide parents with reason to acquiesce. The Palestinian Authority pays parents $2,000 for each child killed and $300 for each wounded child. Saudi Arabia pledged $250 million as part of a billion-dollar fund established to aid families whose children are killed. The Arab Liberation Front was paying $10,000 to the parents of each child killed and $25,000 for suicide bombers.

Toddlers have served as cover for terrorist activity by hiding munitions in their clothing. Paramedics found an explosive belt with 21 kilograms of explosives hidden under the pad of an ambulance stretcher carrying an ill Palestinian child. The Hezbollah weekly journal reported that children had helped make weapons and ammunition in the Jenin refugee camp, and then clashed with Israeli forces after they were armed with grenades and explosives.

Throughout the Palestinian territories, walls are plastered with posters of young martyrs who are idolized by Palestinian youth the way other teens worship rock stars. Against such a backdrop, Wajdi Hatab, age 14, told his classmates days before being killed: “When I become a martyr, give out kannafa (traditional cake).”

From an early age, children are fed anti-Zionist, anti-Jewish and anti-Western hate propaganda. Mosques, schools, summer camps, and even children’s television programs are exploited to encourage children to become martyrs in an act that will bring them respect and parental pride:

Palestinian children’s day also has a text, just as Jews have a Haggadah. It is a poem by Mahmud Darwish, the Palestinian national poet laureate, written after the outbreak of the first Intifada, which sanctioned and sanctified “the children of the rocks”, and praised “Arab youth on the road to victory, each with a coffin on his shoulder.” The poem eventually was set to music, encouraging countless Palestinian children to martyr themselves as a form of socially-condoned conduct that would bring them fame and prestige. This nihilistic bent took an even more destructive path in the second Intifada, as the ‘weapons of choice’ moved from rocks to explosives and the role of the children moved from reckless life-threatening behavior to conscious premeditated suicidal acts.

A day ostensibly dedicated to children has in the Arab world become the antithesis of civilized and human concern for the lives and well-being of the young. Its theme is hatred, its method is violence and extrajudicial murder, and its agents are the brainwashed youth of a culture which willingly sacrifices them for the sake of their own political agenda.

So this year again in April two visions stand in stark opposition to each other. Passover speaks with the language of hope, of compassion, of love and of faith in a future of peace and universal coexistence. Palestinian children’s day continues to preach turning plowshares into swords and pruning hooks into spears, with their next generation as victims.

It was Golda Meir who brilliantly predicted the future: “We will only have peace with the Arabs when they love their children more than they hate us."

Tunnels in Northern Israel: What You Need to Know

Who is Guilty of War Crimes in the Gaza War?