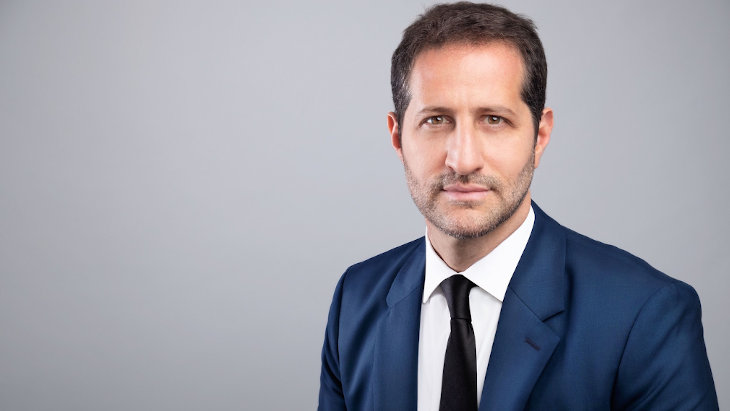 Modi is a comedian who is proud to be Jewish. He wants you to be proud about it too.

"You can't make fun of Mohammed nowadays; they get very, very touchy. And we Jews just don't get it. There's a cartoon drawn about us every single day -- Moses coming down the mountain with bags of money instead of tablets. But do we go around burning buildings? No. We buy the building, change the zoning law, and sell it for five times the value."

That's how New York based comedian "Modi" opened his routine on NBC's hit reality TV show Last Comic Standing. If you missed it, not to worry; it's hard to miss Modi these days -- he's practically everywhere.

Mordechi "Modi" Rosenfeld was born in Israel and moved to Long Island, New York when he was seven. He was on track to becoming a Jewish mother's dream -- a nice Jewish boy working on Wall Street as a Vice President at Merrill Lynch. But that all changed when, at the behest of a friend, he got onstage for an open mike at a local comedy club. His performance went so well, the next thing he knew, he found himself going straight from his job on the "Street" to his job on the "Stage" almost every night.

Now, Modi can be seen performing stand-up comedy on NBC, Comedy Central, BET, and in most of the major comedy clubs nationwide. He can also be seen in one of his acting roles, such as his appearance on HBO's The Sopranos as an Israeli diamond dealer. Or, if you stop by the Community Synagogue on 6th Street in Manhattan you can see him perform in a different role - as the shul's chazzan (cantor).

This is clearly not an ordinary comedian's resume, but Modi is not your ordinary comedian. One of the things that makes his act so is his emphasis on his own Jewishness. "I am very proud of being Jewish," said Modi, well - proudly. "At first I had a manager who told me to downplay the fact that I was Jewish and my Jewish humor. But then I switched managers. My current manager -- Eric, is not Jewish, but he encouraged me to do comedy about who I really am -- and I am Jewish to my core. When I started talking about my experiences and insight as a Jew, that's when I really started becoming successful."

Modi pleads that others shouldn't make the same mistake that he once made when he downplayed his background. "Nobody should hide away from his Jewishness. If you are Jewish, you have a different view of life - it's just part of you. And comedy has to be an honest reflection of that or else it's not funny. Besides, you can't be embarrassed to be Jewish - it's a "zchus" (merit) to be Jewish!"

And does his focus on being Jewish limit Modi's prospective audience? "It's not just Jews that are into my material -- I perform all over the country. I performed on BET (Black Entertainment Television) in front of 3000 black people. I was one of 2 comedians out of 65 who weren't black, and they thought this New York Jewish boy was hilarious."

What's clear from speaking to Modi, or from watching him do a set onstage, is that just loves being Jewish. So much so, that he even decided to study cantorial music at Yeshiva University's Belz School of Music.

"I love being a chazzan, and in a way you are just a different type of performer," explained Modi. "For one thing, you have a different audience -- God, and He better like the performance, or you are in trouble. On another level, the 'audience' is the congregation. But they are not just an audience in the way that they are watching you, but you are leading them, you have to uplift them, help them connect. Make them proud to be Jewish. That's what I love doing -- making people feel good about being Jewish. As a chazzan, I am just doing my part to help people connect to God, and be the best Jews they can be."

Modi practices what he preaches. Not only is he committed to Judaism, he is committed to the Jewish community as well. He performs around the country on behalf of Jewish and Israeli organizations such as his show for the American ambassador to Israel at the Israeli consulate in New York attended by former Prime Minister Shimon Peres. He is usually onstage in Israel at least once a year and even performed for Israeli astronaut Ilan Ramon (Z"L) at his launch party in Houston before takeoff. "Ilan was a close friend of the family. We celebrated Jewish holidays together while we were in Houston. His death was very difficult for all of us. For myself, my family and the entire Jewish people."

Modi has a serious side and displays it often when, ironically, he is speaking about why he loves being a comedian. "I don't do comedy for the fame. I actually get a high from making people laugh, and making Jewish people proud to be Jewish. If you raise money for some organization, or just have the ability to make people laugh, it's an unbelievable feeling. Let's say somebody has had a tough day, and they are really down. All of the sudden, he's watching you and laughing. It's a very spiritual experience. You're almost engaged in a certain type of healing."

When asked if he thinks it is strange that a former Wall Street banker has emerged as one of today's hottest stand-up comedians, Modi responds with the typical Jewish insight that has made him so popular. "Everything happens for a reason. I worked in business for many years, and there was a reason for that. I learned a lot of important lessons. And now I am a comedian, and there is a reason for that too -- it's God's will -- everything is."

Before heading out the door to catch a plane for a show in Israel, Modi concluded, "Comedy is my calling. Everyone has his or her own calling in life. A doctor, a lawyer, a teacher, a rabbi-- hopefully they are all doing their particular job because that's their calling. And being a comedian, a performer -- that's my calling."

Why Are Jews Funny?

He Knows if You've Been Naughty or Nice
Scientific Curiosity and the Divine Encounter
Mind Over Milkshakes
Love the Convert
Comments
MOST POPULAR IN Jewlarious
Our privacy policy
Aish.com Is Looking for Great Writers