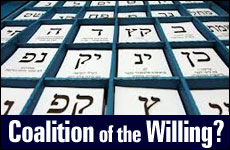 The Jewlarious guide to the 2013 Israeli election and Benjamin Netanyahu’s coalition options.

JEWLARIOUS SATIRE: November 6, 2012 was Election Day in the United States. By approximately 11 p.m. that same evening ,balloons and confetti were falling at Obama headquarters as the American people knew who their President would be.

The Israeli election was January 22, and we still don’t know the makeup of the Knesset.

By contrast the Israeli election was held on January 22, 2013 and we still don’t know the exact makeup of the next Israeli Knesset. While Benjamin Netanyahu is the presumptive Prime Minister, there have been no balloons and confetti at his campaign headquarters. Maybe some falafel and humus. Maybe.

Are you one of the many who find the Israeli electoral system confusion? Wondering what is taking so long? Well never fear, Jewlarious is here with an explanation of the electoral system, the winners and losers, and what Netanyahu’s coalition options are.

The Israeli parliament or Knesset has 120 seats, modeled after the 120-member Jewish court called the Anshei Knesset Hagedolah (Men of the Great Assembly) which existed in biblical times. The presumptive Prime Minister comes from the party that wins the most seats. If his party wins more than 60 seats, then game over – break open the humus. But this never happens, so the presumptive Prime Minister has to form a coalition with some of the other parties to get him over the 60-seat threshold. Sorry Bibi, put the humus back in the fridge.

Results of the 2013 Israeli election breaks down as follows:

Likud – led by Benjamin Netanyahu is considered right of centre – although it would be considered left to any party to the right of it. Stay with me here. Likud merged in this election with…

Yisrael Beitenu – or “Israel is our Home,” traditionally a Russian immigrant party which is also right-of-center. It is led by Avigdor Lieberman who has had some legal troubles, but come on – which politician hasn’t. Lieberman also has a beard. It’s hard to trust a politician with a beard like that.

Yesh Atid (“There is a Future”) – a new centrist party led by popular former television host Yair Lapid. It’s not entirely clear what the Yesh Atid platform is thus far, as most of the party are first time politicians. But what is clear is that Yair Lapid is very good looking. Seriously, even his eyebrows are good looking.

Labor – considered left-of-center, the influence of this once-dominant party in Israeli politics has waned over the last 30 years. The party of David Ben Gurion is now run by Shelly Yachimovich who is also a former television host. What is it with Israelis and their television hosts? Katie Couric, you could be the next Prime Minister of Israel!

Katie Couric, you could be the next Prime Minister of Israel!

Habayit Hayehudi (“The Jewish Home”) – right-of-center and sometimes called a “nationalist” party (why is that a bad thing?). It is a religious Zionist party led by former army commando turned dot-com millionaire Naftali Bennett. Bennett is considered controversial by some due to his statements that the Palestinians do not really want peace with the State of Israel. Not sure why that is controversial.

United Torah Judaism – the Ashkenazi ultra-Orthodox party. Its politicians have beards, but these are religious beards so do not arouse suspicion like Avigdor Lieberman’s beard.

Meretz – the extreme left-wing party headed by Zehava Gal-On. In a recent interview Gal-On commented, “When I look at Israeli society I get depressed, because most of the people here are right wing or close to the right wing.” To those on the left of Gal-On, they think the same thing of her.

Hadash – an Arab party – yes, you read that correctly. Arab Israelis vote freely in Israeli elections unlike their brethren in the majority of Arab countries. Hadash’s political outlook is Communist. Apparently they didn’t get the memo from the Kremlin that Communism is over.

United Arab List (Ta'al) – another Arab party – yes, you read correctly. Arab Israelis vote freely in Israeli elections unlike their brethren in the majority of Arab countries. Ta’al did get the Kremlin memo – they are not Communists.

Balad – another Arab party – yes, you read correctly. Arab Israelis vote freely in Israeli elections unlike their brethren in the majority of Arab countries. Balad opposes the idea of Israel as a Jewish state, preferring a bi-national state. In addition, one of its members, Haneen Zoabi, is apparently a big fan of Iran obtaining nuclear weapons. What a patriot.

Kadima – once the party of Ariel Sharon which obtained 29 seats in the 2006 Knesset, this time around they squeaked out only 2 seats. At one point it was kind of a centrist party, but now with only two members they’re probably going to hang out in the Knesset cafeteria playing video games.

The way we see it Netanyahu has five coalition options.

Broad Coalition Option – Netanyahu has said publicly that he wants to form the broadest coalition possible, to confront the numerous challenges that Israel is facing on the horizon. Labor, Meretz, Hatnuah and the Arab parties have all said that they would not join a Netanyahu government. So that leaves:

Looks good, right? Problem is that Yesh Atid has intimated that they won’t sit in a government with the ultra-Orthodox parties. Oy, why do we Jews have to make things so difficult!

Right-wing Coalition Option – Okay, Mr. Handsome Eyebrows, you don’t want to sit with the ultra-Orthodox party? Well, Netanyahu can do this:

This option comes with cholent & brisket every Friday on the floor of the Knesset.

Centrist Coalition Option – Netanyahu could also ignore the right wing and religious parties and do this:

The problem with this option is that Labor and Hatnuah have both said they would not sit in a Netanyahu government. That’s what they say, anyway. Also, in this option there is definitely no cholent Fridays.

Broad Coalition without Habayit Hayehudi – this is the same as the Broad Coalition Option except without Habayit Hayehudi (= 70). Naftali Bennett used to be Netanyahu’s Chief of Staff, but the two had some sort of falling out, so Netanyahu may pursue this option to spite Bennett. This is the political equivalent to giving your fellow classmate a wedgie.

Hell Freezes Over Coalition – Just for the sake of exploring all our options, Netanyahu could conceivably do this:

The problem with this option? Every single one of these party leaders would probably like to see Benjamin Netanyahu come down with the Ebola Virus.

So there you have it: the Jewlarious guide to the 2013 Israeli election. Good luck, Mr. Netanyahu – you're going to need it.

(Silly disclaimer: This was just a fun article meant to elicit a few laughs. Please don’t take any of the politics seriously!)

Type A Men and the Women Who Love Them

I Hacked into my Daughter’s Jdate Profile

Jewfro Diaries
The Blue Beyond
Great Place to Live
Is Eating Supposed To Be Spiritual?
Comments
MOST POPULAR IN Jewlarious
Our privacy policy