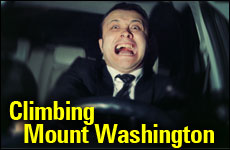 In a matter of minutes, I went from feeling hero to fool.

It was the scariest moment of my life. I thought I might die at any moment.

One wrong move and the minivan with the whole family inside would plunge to our deaths. And it was all in my hands.

Mount Washington, New Hampshire, is a mountain with the highest peak in Northeastern United States at 6288 feet. But you don’t have to be a mountain climber to climb to the peak. You can drive up these very winding roads – with no guard rails! – that lead you up the mountain. And at the top you can get one of those ubiquitous bumper stickers, “This Car Climbed Mount Washington.”

Although my friend told me that he was too scared to drive up the mountain, I figured, “What’s the big deal? If there’s a road, just drive on it and stay straight.”

I had no idea what I was in for.

Somehow, we made it up the mountain primarily because I refused to look down or to the sides. If I did, I thought I’d have a nervous breakdown. 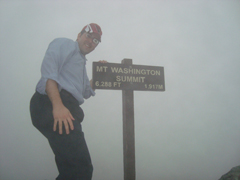 Up on the mountain, we took the walking path to the actual peak, and each of us posed for a picture to serve as proof of our feat. We came down from the peak, walked around the museum, relaxed and took a break. While perusing the museum, I stumbled upon one part which describes all of the climbing accidents, climbers and cars full of people who died on the mountain. It freaked me out.

It wasn’t enough that I had the very difficult task before me to drive down a winding 6000 foot mountain road with no guard rails. On top of that, the weather took a big turn for the worse. It began while we were up on the walking path. Heavy rain, wind, fog, my glasses fogging up.

I would have to drive down this dangerous mountain in heavy fog and pouring rain, with almost zero visibility.

We couldn’t even wait out the storm because it was nearing closing time for the mountain top visitor center.

There was no choice. I would have to drive down the most dangerous mountain in the Northeast, in heavy fog and pouring rain, with almost zero visibility, with the possibility of other cars driving the other way on a very narrow road.

But I couldn’t let my family know just how scared I was. They saw me being quiet and tense but I was able to project a general sense of “I can do this,” though I really felt, “How can I do this?!”

I asked everyone in the car to be pretty quiet and allow me to concentrate on moving slowly, steadily, and straight, foot by foot. I also asked them to silently pray and say some Psalms asking God to help us through.

Wind moved our car as we drove. Rain splashed on the windshield. Fog blocked vision. Other cars indeed passed us the opposite way, leaving us a mere few feet from the cliff. But we trudged along, ignoring the recommendations of the signs to stop the car and let the brakes cool down. I knew that if I stopped, I really might have a nervous breakdown.

I have never felt such stress. If the car would skid or slip even slightly to the left or to the right, who knows what could happen. I couldn’t finish such a thought.

Slowly but surely, after around double the amount of time it usually takes to get down the mountain, it was over.

Thank God, we made it!

After finding a place to park, I turned to my family and screamed, “That was the hardest, mentally taxing experience I ever had!”

I had to rest and chill for a half-hour to get back to myself. We headed back to our hotel and I felt like a hero.

What an amazing feat, I kept thinking. What a story to tell. I felt a personal sensation of glory.

But that all changed very rapidly.

We drove up to the hotel and drove our car into the underground garage. Suddenly, we heard a very loud crash.

I had neglected to pay attention to the signs warning that the garage only fits cars under a certain height and our car’s top carrier, which held our luggage, took us over the limit.

We got out of the car and saw the destroyed carrier in pieces all over the parking lot.

After dealing with the massive clean-up, and relaxing in the hotel’s whirlpool after a really harrowing day, the thought occurred to me.

I was able to accomplish the ‘big deal’ feat today but I failed at a routine activity.

That’s one of the big problems we face in life.

We can muster up the spiritual adrenaline to succeed at ‘big things,’ but how do we do in the simple ‘small stuff’?

Our Sages tell us that God does not bring greatness upon a person until He tests him in a small matter (Shemot Rabbah 2:2). The lesson is that the greater you become, the more you must appreciate small accomplishments. The reality is that nothing is insignificant when it comes to spiritual growth.

Greatness requires the small but consistent decisions to do the right thing, when there is no spiritual adrenaline present.

It can be an easier decision to die for God than to live day-to-day for Him. There is no question that martyrdom is a very difficult test, but it only takes a minute and then it’s over. To live an entire life committed to growth and getting close to God may be even more difficult. It requires the small but consistent decisions to do the right thing when there is no spiritual crisis or adrenaline present.

It’s not enough to care about the big aspects of life; true greatness can only be achieved through the caring about the small but steady things of life.

As we enter the season of repentance in the Jewish month of Elul, we would do well to keep all this in mind.

Daily kindnesses, smiling at people, greeting them warmly, reciting prayers with awareness and focus, studying Torah with energy. These are the things we face all the time and must look to improve.

It’s great to climb Mount Washington once in a while, but it’s even more wonderful to work on the steady, daily, less glamorous activities which lead us to true spiritual greatness.

Three Words of Self Doubt

Brace for Impact
Faith: the Axis Upon Which the Wheel of Science Turns
Love - Not Just About Chemicals Anymore!
Is There a Moral Code in a Virtual World?
Comments
MOST POPULAR IN Spirituality
Our privacy policy