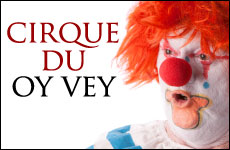 If you’ve lived on planet Earth for the past 28 years, or for even a portion of them, you’re no doubt familiar with the phenomenon that is Cirque du Soleil, a Canadian entertainment company, self-described as a "dramatic mix of circus arts and street entertainment."

Each Cirque show is a synthesis of circus styles from around the world, with its own central theme and storyline. The shows draw the audience into the performance through continuous live music, with performers rather than stagehands changing the props. Oh, and there are no animals.

The only thing missing from the Cirque du Soleil experience – a Jewish version.

In fact, a Cirque show is as different from a traditional circus show as Megadeth is from the Tommy Dorsey Orchestra. Whatever you feel about its genre-bending shows, you can’t argue with its success. More than 100 million spectators have seen a Cirque du Soleil show since 1984. Close to 15 million people will see a Cirque du Soleil show in 2012. Cirque has created and staged 19 different shows in over 271 cities on every continent except Antarctica. The current shows employ approximately 4,000 people from over 40 countries and generate an estimated annual revenue exceeding $810 million. Several more shows are in development around the world, along with a television deal, women's clothing line and the possible venture into other mediums such as spas, restaurants and nightclubs.

There’s only one thing glaringly missing from the Cirque du Soleil experience – a Jewish version of the show. I am pleased to inform you that that omission has now been remedied by virtue of a Jewish entertainment company called Cirque du Oy Vey, a Las Vegas-based company self-described as a “dramatic mix of circus arts and Jewish popular entertainment.”

Will Cirque du Oy Vey attain the popularity, success and broad appeal of its better known predecessor? Only time will tell. But for now, decide for yourself as you check out this preview of some of its shows currently in development for a Las Vegas release in the near future:

AFIKOMEN
Afikomen invites the audience to a mysterious island governed by a bubbe -- Charoset, who celebrates Passover every day and reads the secret messages on her matzoh – kind of like brail. Charoset acts as her daughter’s shadchan (matchmaker) in her quest to find a husband who is a doctor or lawyer. When a group of young men lands on the island, they trigger an epic, emotional story of love between Charoset’s daughter, Karpas, and a brave young copywriter, Chametz. The couple must win Charoset’s approval by hypnotizing her into believing that a copywriter can provide her daughter with an even more secure future than a doctor or lawyer. Yes, it’s a fantasy.

TZIMMES
Tzimmes is a mood, a state of mind. The themes of the show, whose name means "sweet stew" or “making a big fuss out of something” in Hebrew, are many. Whining and nagging throughout the centuries, the evolution from ancient to modern mothers-in-law, old age, youth, gefilte fish - it is against this backdrop that the characters of Tzimmes play out their lives. Kings' fools, minstrels, beggars, mohels and junior accountants make up its universe, along with the everything bagels, which alone are able to resist the passing of time and the social transformations that accompany it.

KUGEL
A kugel is a casserole of potatoes, eggs and onion. It could also be a dessert of noodles, fruits and nuts in an egg-based pudding. How like life is a kugel! Kugel tells the story of Shlomo Kugel, a melancholy loner in search of his place in the world. It combines two Jewish circus traditions - acrobatic envy and high-wire sulking. The show highlights the physical demands of human depression in all its splendor and fragility, presented in a colorful mélange that emphasizes bold slapstick complaining. Shlomo Kugel’s journey brings him into contact with a panoply of Judaic comic characters such as the Kosher Butcher, the Bankruptcy Attorney and the Shadchan (matchmaker). Between strength and fragility, laughter and smiles, self-doubt and overeating, Kugel explores the popular Jewish themes of fear, revulsion, dread, anxiety and despair. The show is set in an electrifying and exotic visual world in which your neighbors and relatives are always doing better than you are.

TREIF
Deep within a forest, at the summit of a volcano, exists a deprived world - a world where something vital is completely missing – kosher food. A world called Treif. From the sky falls a solitary young man – a Rabbinic Field Representative from the Orthodox Union, and the story of Treif begins. Parachuted into the shadows of a magical forest, a kaleidoscopic world populated by creatures who will eat virtually anything, no matter how it is killed or prepared, this young man sets off on an adventure both absurd and extraordinary. On this day at the edge of time, in this place of all possibilities, begins an awe-inspiring, life-changing kosher lesson for the creatures of Treif. The word Treif, of course, means "Non-kosher food, food not in accord with Jewish dietary laws". This production pays tribute to that ingrained kosher soul, to the spirit and art of the Judaic circus tradition originated by Mendel Barnum, to divorce attorneys and to the infinite passion of those whose quest takes them along the path that leads to Treif.

BLINTZ
Blintz is a headlong rush into a colorful ecosystem teeming with life, where Jewish insects work, eat, crawl, flutter, play, fight, buy wholesale and look for love in a non-stop riot of energy and shvitzing. The insects' home is not unlike that of Tevye’s from “Fiddler on the Roof,” filled with noisy action and moments of quiet emotion, except when they sing, “Ya ha deedle deedle, bubba bubba deedle deedle dum.” When a mysterious blintz appears in their midst, the insects are awestruck and intensely curious about this iconic object. As they become more familiar with it, they realize it is simply a thin, rolled blini, proceed to fill it with cottage cheese, and then fold it, bake it and serve it with sour cream. It's love at first sight when a gawky, quirky Talmud scholar grasshopper arrives in this bustling community and a fabulous ladybug Hebrew school teacher catches his eye - and the feeling is mutual. Blintz is about love, the secret world at our feet, and tasty but fattening foods.