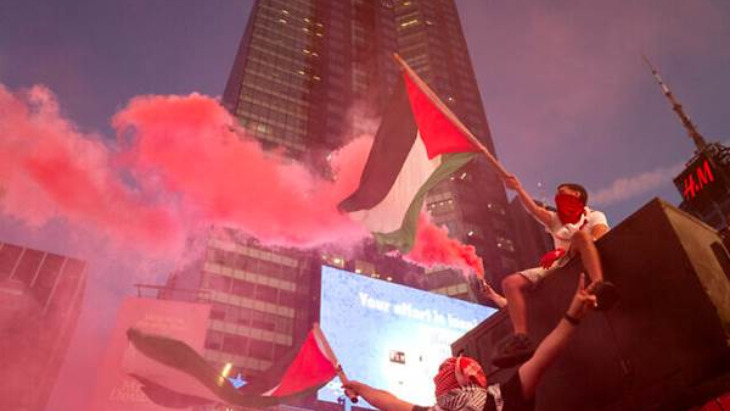 After witnessing weeks of anti-Israel protests that veered into overt anti-Semitism, a group of Chicago-area high school and college students finally had enough. They arranged a pro-Israel demonstration in the center of the town of Naperville, a peaceful suburb about 30 miles west of downtown Chicago, for May 23, 2021. “Chicagoland! Stand with the Jewish Community and Allies this Sunday!! Israel needs you!” posts for the rally declared. Participants were asked to wear blue and white, the colors of the Israeli flag, and to bring Israeli flags.

Nothing prepared these students for the shocking violence they encountered. Within hours, the pro-Israel rally devolved into violence, with Jewish teens being threatened with death. In an Aish.com exclusive interview, some of the Jewish students involved discuss the breathtaking antisemitism they witnessed this past Sunday.

“I’m the president of Students Supporting Israel down on campus,” explains Daniel Raab, a 21-year-old who is about to graduate from the University of Illinois, and was one of the organizers of the pro-Israel rally. While he describes Jewish life at the University of Illinois as thriving, over the years he’s been harassed for being Jewish on several occasions. “My freshman year I had my mezuzah ripped off my dorm room door,” Raab recalls. 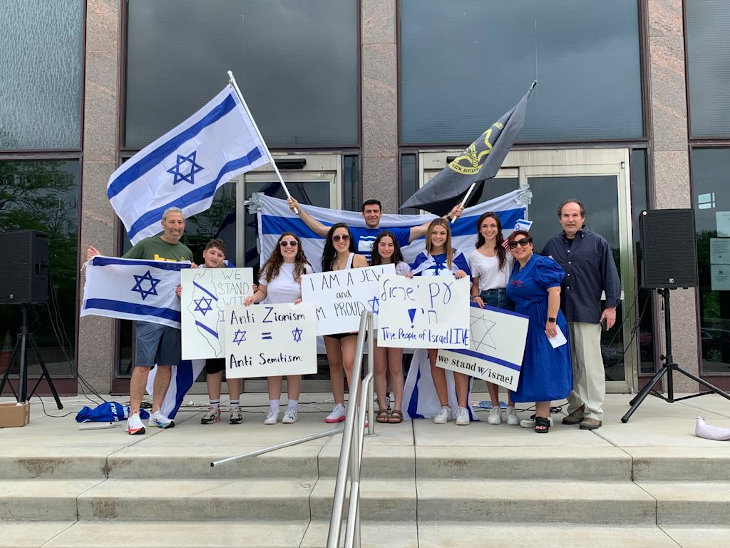 When the university declined to treat the incident as a hate crime – sending out a bland letter warning students not to vandalize other people’s property without mentioning the specifically Jewish nature of the theft – Raab watched as antisemites were emboldened. He replaced his mezuzah and also put an Israeli flag on his bedroom door. “For weeks, people in the night would be pounding on the door and spewing antisemitic and anti-Israel slurs,” he recalls.

In recent weeks, Jews across the US and globally have found themselves on the receiving end of increasingly levels of anti-Jewish hatred. For American Jews, 2020 saw record levels of anti-Semitic incidents.

In other countries, anti-Semitism has broken records as well, including Austria, Britain, Canada and Australia.

With the recent fighting between Hamas and Israel, antisemitism is surging. In Los Angeles, a group of Jewish diners was recently beaten up outside a restaurant by men who shouted “Who’s Jewish?”, “‘Dirty Jew,” and “Death to Israel.” In New York’s Time Square, a Jewish man was beaten and pepper sprayed by men shouting anti-Jewish slurs. In Brooklyn, two Jewish teens were beaten up by a group of six men who shouted “Free Palestine!” during the assault.

Daniel and other students decided to take a stand. Along with his 17-year-old sister Talia, Daniel began planning a pro-Israel rally for Sunday, May 23, in the center of his peaceful, upscale suburb of Naperville, right next to the Town Hall. To their shock, they soon ran into opposition from their fellow Jews.

Some local synagogues they approached for help declined to get involved, refusing to even send an email about the rally. One local Jewish leader told Daniel and Talia that they couldn’t get involved unless the rally was backed by large Jewish organizations. Yet when Daniel and Talia obtained help and backing from the Jewish United Fund (Chicago’s large Jewish Federation) and the Midwest Consulate of the State of Israel, the local Jewish leader still refused to take part.

Talia's Instagram account publicizing the rally received vitriolic and hateful anti-Jewish and anti-Israel comments. “I’m supporting Hitler” was one odious comment. “Talia knows some of the people making these disgusting comments,” Daniel observed. “It was a complete change from the way our neighbors treated us.”

A group of anti-Israel protestors quickly formed and got permission for a counter protest at the same time nearby. Their presence soon became violent and intimidating.

Sammy Moscovitch, 19, travelled to the rally and discovered that the small pro-Israel group was vastly outnumbered by counter-protesters. “I came as a supporter,” he explains. “Our goal was not only to show we’re Jewish and proud – our main goal was to show that with everything going on in the eleven days of violence (between Hamas and Israel), that we still see peace and serenity as our goal. We wanted to show we’re not afraid.”

As he joined approximately 50 other Jews and allies who were there to support the Jewish community, Sammy saw anti-Israel protestors amass. “We were outnumbered ten to one.” He estimates the crowd of anti-Israel demonstrators was in the thousands. Naperville police officially have pegged it at approximately 700.

The pro-Israel rally began with singing and speakers inspiring the small crowd. “It was very positive,” recalls Rabbi Mendy Goldstein, co-director of Chabad of Naperville, and one of the speakers. “There was a lot of Jewish pride...I felt proud that here we are standing up for the Jewish people, standing up for our brothers and sisters in Israel. It was very uplifting,” he described to Aish.com.

As he spoke, Rabbi Goldstein saw pro-Hamas protesters try to rush into the Israel rally. “Thank God, the Naperville police department did a great job of keeping them out of the way.” As Rabbi Goldstein spoke his speech was drowned out repeatedly by Hamas supporters who screamed, waved flags, shouted “Free Palestine” and “Coward, coward, hiding behind the police” and drove around honking car horns to try and disrupt the Israel rally. 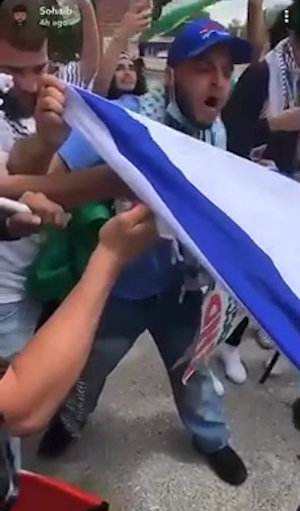 “The police told us we have to wrap it up," Daniel explains. "There are safety concerns and we’re worried about a confrontation; they’re looking for violence.” Daniel was ordered to leave the plaza as hundreds of anti-Israel protesters rushed in. “They were marching towards us and we were rushing out of the plaza – it was basically an evacuation.”

Protestors waved flags of Hamas, Lebanon, the Palestinian Authority, Syria, and Iraq. The mob chanted bloodthirsty slogans including Khyber Khyber ya Yahood, Jaish Muhammed sa Yahood – “Jews, remember Khaybar (a battle in the year 628 when early Muslims massacred Jews in present day Saudi Arabia) – the army of Muhammad is returning. The chant is used as a battle cry by Islamists when they’re attacking Jews or Israelis.

As the pro-Israel rally-goers left, one car full of teenagers was surrounded and attacked. Daniel witnessed Hamas supporters jumping on their car, trying to break into it. As the police tried to stop the attack, the protestors grabbed an Israeli flag out of the teenager’s car, set it on fire, then threw the smoldering flag back into the car.

“My windows were locked, my doors were locked,” recalls Sammy Moscovitch, describing driving through downtown Naperville later that afternoon. He’d phoned the Naperville police to ask if it was safe to drive; they’d assured him it was, but as he approached the center of town, the anti-Israel mob zeroed in on his car, spying an Israeli flag that was inside. “Cars swerved to nearly hit us. Motorcycles were coming up to us, hitting up against the car doing burnouts (spinning the wheels while not moving). People got out of the cars in the middle of the street while their cars were moving. Between twenty and thirty people made attempts to come at us.”

A group descended on Sammy’s car while he was blocked in at a busy intersection. “There was one man who kicked my car and punched my window… I was stunned.” Sammy was driving some friends at the time, including one of his friend’s 12-year-old brother. "They were screaming such hate-filled profanity and threatening us, it was incredible," Sammy recalls.

Sammy was eventually able to drive out of the intersection before the mob could smash his windows.

Refusing to Give Up

The day following the mob attack, many of the rally’s organizers are resolving to keep advocating for Israel. Talia Raab returned to high school the following day, even though she’d likely confront students who’d supported the pro-Hamas mob and see people who’d filled her Instagram feed with vile anti-Semitic comments.

Rabbi Goldstein has been in touch with some of the students since the attacks, and notes that they’re confident in their ability to stand up for Israel, even when faced with threats of violence. “I love Israel, I will always love and support Israel,” Sammy Moscovitch explained the day after he was attacked. “We may be startled at times, but we won’t be scared by their actions because the day we say we’re scared they’ve won.” Instead of staying home when those who hate us threaten violence, “we need to support each other and be there for each other.”

Naperville police have heard that future anti-Israel rallies are being planned in the town, and elsewhere, anti-Israel sentiment is growing, tapping into age old anti-Jewish hate.

In the face of anti-Jewish hatred, we can all learn a lesson from the students in Naperville who stood up for Israel even when it was difficult to do so – and who are not backing down.

Do We Really Mean ‘Never Again’?

Where Have All the Volunteers Gone?

Holocaust Survivor Reunited with Daughter After 80 Years
Why My Iranian Mother Didn’t Want Me to Become a Religious Fanatic
The Jewish History of Prague
Why the Sexual Revolution was Bad for Women
Comments
MOST POPULAR IN Israel
Our privacy policy
Aish.com Is Looking for Great Writers