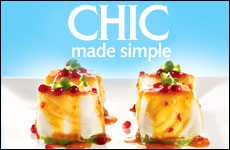 Select recipes from the just-published cookbook, CHIC Made Simple. 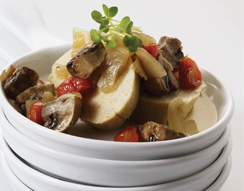 If the concept of a gefilte fish craving sounds foreign to you, well, that’s about to change. At Toby E.’s house we’re always served a glorious amount of fabulous food (which leaves me with a glorious amount of inspiration). This is one of Toby’s recipes, and it’s the kind of recipe that travels fast. You’ll see...

Note: If the frozen gefilte fish loaf is wrapped in parchment paper, let the fish thaw slightly. It will be easier to remove the paper before baking. 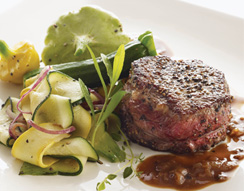 This savory dish may serve as a midweek dinner or you can save it for your Friday night menu. If you’re serving this dish alongside other main-course dishes, the portion sizes can be cut in half. If preparing this in advance, you can reheat it, uncovered, in an oven set to 175° F for no more than two hours.

For this recipe, I use port as the wine of choice because of its rich color, but cognac and madeira both work well, too.

1. Season the steaks with the salt and black pepper to taste, then sprinkle with the Worcestershire sauce. In a sauté pan, heat the oil over high heat. Sear the steaks in the oil until medium-rare or they reach the desired level of doneness, about 4–5 minutes per side. Remove the steaks from the pan.

2. To prepare the sauce: Add the shallots and garlic to the pan in which the steaks were pan-seared and sauté briefly, about 5 minutes. Leaning away from the stove, add the port, madeira, or cognac and cook for a few seconds. Add the chicken stock, mustard, thyme, and tarragon and bring to a boil, stirring occasionally to scrape up all the drippings.

Reduce the heat to medium–high and continue to cook until the liquid is thickened and reduced by half, about 10 minutes. Remove from the heat and remove the sprigs of thyme and tarragon. Add the margarine and stir until incorporated.

3. Pour the sauce over the steaks and serve warm. 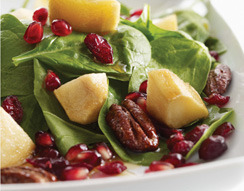 If I were officially developing a pear salad, I’d naturally combine the sweetness of pears with peppery arugula. But this salad was an unexpected, delicious accident – I randomly teamed up pears with baby spinach after rummaging through my fridge for ingredients.

The results were surprising – and amazing. I did know that fragrant ripe pears are lovely when caramelized, and I added some of the juice from the caramelized pears to the vinaigrette to lend the dressing a pear-infused taste. I love testing my recipes on large crowds, and when we attended a fabulous dinner party hosted by Yali, I was presented with the perfect opportunity to test this recipe. So when Yali suggested that we should plate the salad individually as an appetizer instead of serving it in the center of the table, it was the perfect idea – and all the plates were wiped clean.

Dairy Version: Sprinkle the salad with grated goat or feta cheese before serving.

1. Preheat the oven to 425° F. Dip the flat sides of the sliced pears in the lemon juice and then in the brown sugar. In a large baking pan, arrange the pears in a single layer and roast for 25 minutes. Remove from the oven and allow to cool to room temperature. Cut each pear wedge into 1-inch slices. (Make sure to reserve the pear juice that was released during the roasting for the dressing.)

2. To prepare the dressing: In a small bowl, vigorously whisk together the oil, vinegar, honey, mustard, garlic, salt, black pepper, and the reserved pear juice until well combined.

3. In a large salad bowl, combine the baby spinach, pears, glazed pecans, and Craisins. Toss with the dressing and sprinkle evenly with the pomegranate seeds. Serve immediately. 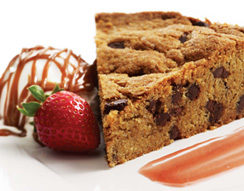 Shoshana treated my family to the most incredible chocolate chip cookies...and the recipe! The original recipe called for shortening, but because the ingredients are so well balanced, it doesn’t miss a beat with oil. I’m convinced this is the best chocolate chip cookie recipe I’ve ever tasted. But how do you transform an already great chocolate chip cookie into a full-blown dessert? Make it an inch and a half thick, of course. And...serve it with ice cream.

Note: This recipe yields two 9-inch round cakes. You can serve the second one as a breakfast cake.

1. Preheat the oven to 350° F. In the bowl of a mixer, beat the oil, sugar, brown sugar, vanilla, eggs, flour, baking powder, and salt on medium speed until well combined, about 2–3 minutes. Add the chocolate chips and combine.

2. Pour the batter into two 9-inch round baking pans and bake, uncovered, for 55–60 minutes. Serve the torte warm with a scoop of vanilla ice cream on the side.

3. To reheat, warm the torte, tightly covered, in a preheated 200° F oven for no longer than 1 hour. 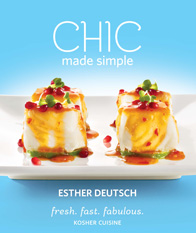 CHIC MADE SIMPLE features delectable, no-fuss cuisine that's made to order for all cooks: recipes simple enough for the novice, fast enough for the busy cook, and impressive enough for the most accomplished. Esther is a self-taught cook who has never taken a single culinary class. If she can do it, anyone can – effortlessly. Features more than 185 deliciously dazzling recipes, accompanied by over 210 magnificent photographs. Click here to order.

ESTHER DEUTSCH is a New York–based food stylist, columnist, and recipe developer. As a food editor of AMI magazine, she has captured the imagination of cooks everywhere with her unparalleled energy and creativity. As the first kosher food column of its kind, her MANNA column, dubbed “a class on its own,” raised the bar. Her debut cookbook CHIC MADE SIMPLE features her most celebrated recipes, as well as many that have never been published before. What renders Esther’s recipes so successful is her unmistakable signature: food that’s super easy to prepare, but always delicious, impressive, and imaginative. She resides in New York with her husband and children.

Delicious Menu for the Seder

Cookie Perfect
Were Adam and Eve Jewish?
How I Learned to Love the Multiverse
10 Big Jewish Inventions
Comments