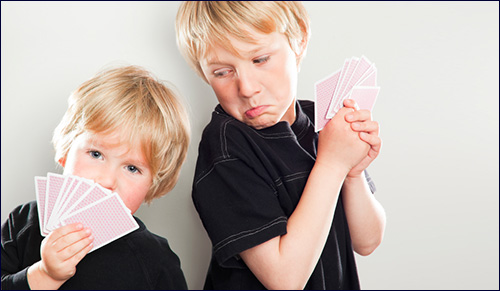 Do our kids realize that losing is not the worst thing to happen? Do we?

I noticed a pattern recently. For some reason I’ve had occasion to visit a number of different friends who still have young children in the house – 8 and under. And for some reason (completely unexplained since I’m not really a kids person!) I’ve ended up playing games with them. In every case, without exception, the rules kept changing as we played – with one goal in mind – to ensure that my young companion won.

At first I excused it. Maybe they’re too young to understand the actual rules. Maybe it’s just more fun to make them up as you go. But the pattern continued – in every home, with every child – the intelligent and the less so, the hyperactive and the calm, the obedient and the defiant. They all – not to put too fine a point on it – cheated.

Is their sense of self so fragile that they can’t endure losing?

I could be overreacting. This could just be the way of small children, something they’ll simply outgrow. Maybe. Hopefully. But I felt uncertain. Has winning become so important that our children believe they need to win at all costs? Is their sense of self so fragile that they can’t endure losing?

If this is true, we’re in trouble and all of us – parents, educators, grandparents, aunts, uncles – need to work together to put a stop to this destructive trend.

It’s not that I minded losing; my prowess at basketball and checkers are not vital components of my sense of self-worth. But don’t laugh. There are adults who are so competitive (read: needy and insecure) that they can’t bear to lose, even to their own children. A close friend of mine told me that he stopped playing chess with his father because his father’s tantrums upon losing outweighed any pleasure in the game. What message did his children get about winning?

I feel like our society has turned into a circus arcade where we should just “step right up” because “everyone’s a winner here.” Nothing could be worse than losing…

In imparting this lesson, we are robbing our children of some important and possibly definitive life experiences – of accomplishing on their own (without rigging the outcome) and accepting the appropriate consequences and of learning through failure. We grow from winning, but we can even grow more from losing, from picking ourselves up and starting again, from being unafraid to take risks for growth even if we sometimes stumble. You can be a mediocre skier who never falls going down the hill. Or you can be a great one who had to take a lot of tumbles to get there (note the spectacular wipe-outs in the recent Sochi Olympics).

In a possible twist of irony (or not), Pierre de Coubertin, the International Olympics Committee founder said “The most important thing in life is not the triumph but the struggle.”

Do winners recognize this? Gracious losers certainly do.

It’s not too late for today’s children. But it’s up to us to change the message: “It’s about the effort.” “As long as you try your best.” “Being a mensch is more important than winning.” “In fact, being a mensch is the most important.”

Most self-aware parents know this to be true. But do we mean it when we say it? And are we living it ourselves?

If we want to provide the best future for our children we need to determine who we are first: winners or decent human beings? And what do we really want for our kids?

One Drink Too Many: My Journey of Breaking Free from Alcohol
The Scandalous History of the Aleppo Codex
Who was Two-Gun Cohen?
Why Really Everyone Believes in Free Will
Should Jews Support Ukraine?
The Jews of Cuba
Comments
MOST POPULAR IN Mom with a View
Our privacy policy