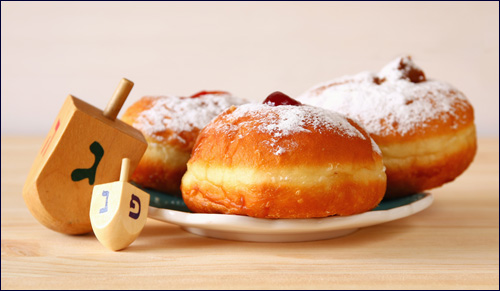 A brief history of the sufganiya – the Chanukah donut.

When I was a kid, we would visit my grandparents in Glasgow, Scotland. Scotland is known for its beautiful rolling hills, its gorgeous lochs (lakes), its wonderful whiskeys, and for frying just about everything they eat in oil.

We Jews like fried food and a little bit of light gambling.

It’s essentially Chanukah in Scotland all year round.

My brothers and I used to love going into the local “fry shop” near my grandparents’ house and testing them on all the different things they fry. I remember one day we pushed them a little too far.

The guy working behind the counter said, “Of course.”

“We batter it and then we fry it.”

“Do you fry hardboiled eggs?”

“We would batter it, and then we would fry it.”

“Whoa. Can you fry chewing gum?”

This was followed by a long pause and a stare down. And then finally the answer.

“Listen pal, you better watch out. One more cheeky question and we’re gonna batter and fry you.”

Part of the miracle of Chanukah is that we had some oil, enough to last for one night. But instead, it lasted eight. There are other parts of Chanukah that were miraculous too, such as the fact that we didn’t all die. So why are we so obsessed with the oil part of it?

The answer is simple: Jews love a great deal.

We can’t get over the fact that we got eight days worth of product out of something that should’ve only lasted a day. In fact, we still hope that such miracles will happen to the Jewish people again today.

For example, the other day, I cracked open an egg and it had two yolks inside. I felt like this was a step in the right direction. A two for one! Perhaps messianic times are upon us.

Millions of latkes and donuts are consumed every year on this holiday. Yet at no point did potato pancakes or donuts save us in the Chanukah story. We’re just very creative about adding carbohydrates to our Jewish holidays.

I think it’s because on Passover, we cut bread out for eight days so we’re always looking for sneaky ways to add it back in throughout the year. And sure, you could say matzah is a carb too. But it’s not fluffy, deep-fried, and delicious. So let’s now explore where the custom of eating latkes and jelly donuts comes from.

Latkes were originally made by a rabbi in Italy in the early 1300s and contained cheese. How Italian. Everything in Italy has gotta have cheese. They were essentially latke parmigiana. The rabbi came up with this because there is a custom to eat dairy on Chanukah as well, and he was looking to make a killing by unloading all the extra ricotta cheese that was lying around his kitchen. Apparently he had over-shopped when buying ingredients for cannolis.

Unfortunately for the rabbi, Ashkenazi Jews then changed the latke when it got to Eastern Europe. They had over-shopped for potatoes to make their vodka, and decided to unload them and make a killing. They got rid of the cheese and replaced it with a dollop of sour cream. How Eastern European.

As for the donuts, the history is a little more complicated. But what I figured out is this: I think Jews used to just chug oil on Chanukah until somebody said, “This is kind of lousy. Maybe we could just soak something in oil instead.”

And that’s what the first sufganiyah was – an oil sponge. You see, sufan, where the word comes from, is a Greek word for spongy.

Every year, Jews used to bite into the oily dough and think, “There’s gotta be something better.” And then one year, some European Jews arrived with pastry bags filled with the leftover jam from their morning crumpets.

The Jews would sit side by side and eat oily dough. Then they’d squeeze the jam directly out of their pastry bags and into their mouths as a chaser. They did this until one person finally said, “This is too much work! Let’s just combine the two things into one.”

Then settlers showed up from the Caribbean with sugar cane one day and processed it into powder. A few jam-filled dough balls fell into them. Someone bit into one and said, “Mmm, now that tastes like Chanukah.” The sufganiyah had finally reached its potential.

So after all these years of Jews bouncing around the diaspora, and trying to figure out how to best celebrate the miracle of Chanukah, we have come to this conclusion: We like fried food and a little bit of light gambling with a dreidel game on the side.

Fun fact: I grew up in a Jewish home where we always struggled for money. As legend has it, my great great grandfather was well off. But he unfortunately gambled away the entire family fortune one night when he went all in on a very high stakes game of dreidel. In fact, a lot of Jews lost their family estates that way, which is why nowadays, we only gamble with fake coins made of chocolate.

That’s right, we found a way to include chocolate in the holiday too.

Danny Lobell is a Los Angeles based comedian. He hosts Modern Day Philosophers, a podcast in which he talks philosophy with comedians, and the live show Bookshelf at the Hollywood Improv. He's been on This American Life and WTF with Marc Maron. His website is DannyLobell.com.