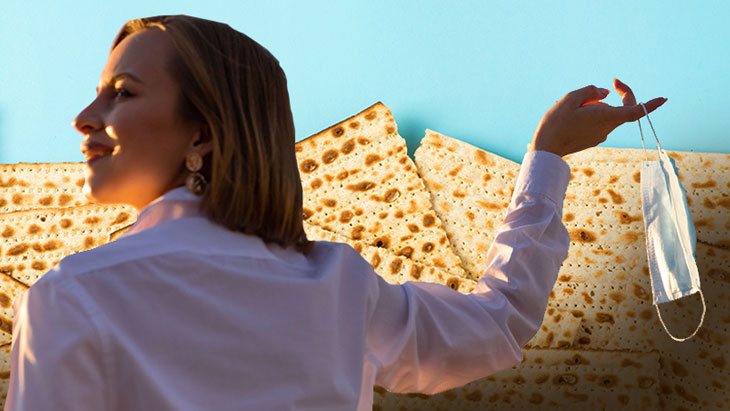 How do we celebrate when our lives are still filled with so much sadness? The nation's very first Passover provides an answer.

How are we supposed to celebrate Passover after experiencing a global pandemic?

We still haven’t gotten over the trauma of the Seder we experienced last year. The families that looked forward to the one holiday that emphasized family togetherness more than anything else were suddenly forced to learn the loneliness of quarantine and the bitterness of the Passover table bereft of our children and grandchildren. Husband and wife, father and mother, were more concerned with the High Holy Day questions we ask of God – who will live and who will die, who by advanced age and who by Covid-19 – than the four questions normally posed by our children.

It's a year later and the story of our contemporary affliction is still not over. For a blessed number, vaccinations and the improving reduction of fatalities permits a return to more traditional observance of the holiday. But for many, the closeness of generations, the physical hugging and embracing of loved ones, remains but a dream, considering the requirement for social distancing and the fear of contagion.

How do we celebrate when our lives are still filled with so much sadness?

I believe the answer was already given in the very first Passover celebrated by the Jewish people at the beginning of our nation’s history.

People forget that the first Passover Seder was observed before the Jews left Egypt. The first matzahs eaten were a reminder of the bread of affliction – the only bread slaves were permitted until then to eat because they were not allowed the time required to have matzah turn to bread. As part of the meal of redemption, the first Seder included maror – bitter herbs – to commemorate the bitter years of suffering and servitude they had until that moment endured.

The Seder expressed the faith that God would turn tragedy into redemption, that the same matzah that was a sign of their slavery would be transformed into a symbol of freedom.

The Seder began as a celebration of hope. The Seder expressed the faith of the Jewish people that God would turn tragedy into redemption, that the same matzah that until then was a sign of their slavery would be transformed into a symbol of the haste which would mark their speedy deliverance from Egypt.

It is not only we who must cope with the difficult challenge of celebrating in the aftermath of communal tragedy. This is how Passover actually began. It was a religious response to more than two centuries of pain and sorrow. It was our ancestors ready to demonstrate that the survivors of the horrors of Egypt were able to move on from the past of suffering and celebrate a future of anticipated blessing with their families.

In a sense, then, this year's Seder in the aftermath of the global pandemic is one that is most like the original version. Why, the commentators ask, do we celebrate the festival of freedom with the mitzvah of eating bitter herbs? Because we cannot fully appreciate freedom unless we remind ourselves of its alternative. We cannot know full joy unless we identify the reasons responsible for our lives’ bitterness.

There are numerous studies that are now appearing about the lessons learned from the pandemic. Never before have people expressed with such conviction their understanding of the importance of family. A Pew research survey last summer found 52% of Americans between ages 18 and 29 were now living with parents, a figure unmatched since the beginning of the 20th century. From February to July 2020, 2.6 million young adults moved back in with one or both parents. It is a culture shift, says Karen Fingerman, Director of the Texas Longevity Center at the University of Texas. And what began out of necessity ended up proving its worth to such an extent that many now believe it will augur a powerful and dramatic shift in defining familial relationships: “After the family dinners, grandparents doing childcare, and the wise economic sense, it is going to be acceptable for adult family members to co-reside.”

Families are discovering that the idea of remaining close, choosing to maintain family ties even as we get older, might well be a blessing we won't opt to discard once Covid-19 is out of the picture.

What did the slavery of our ancestors in Egypt serve to teach us? The Torah, in 36 different places, makes clear that whatever else its cause our Egyptian experience was also intended as a learning moment.

The tragedies of Egypt that serve as source for Passover carry the seed of a learning experience. They bring with them a message. Their bitterness also serves a purpose.

As survivors of Covid-19 we too need to face the forthcoming festival with that selfsame awareness. We need to celebrate Passover this year as our ancestors did when the holiday made its first appearance – merging what we can learn from the bitterness of the past year with the matzah of hope for the future.