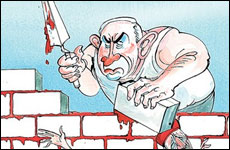 A Jewish cartoonist discusses why the recent Sunday Times cartoon was so offensive.

I first saw the cartoon when my father showed it to me on his phone. I instantly assumed it was a sample from the lovely Arab press, where sadly, these kinds of images are commonplace. But I was horrified when he told me that it actually appeared in the Sunday Times, a newspaper purportedly in line with tolerant multi-culturalism to which Britain aspires.

I too am a cartoonist, so I know well the emotional responses cartoons can trigger. It was not so long ago that the publication of the Danish cartoon depicting Mohammed as a suicide bomber sparked shockingly violent protests from offended Muslims around the world. At that time I was astounded at how immensely powerful images can be; their impact has an immediacy that words lack, and their visual, visceral nature can cause deep distress. This was proven once again by the reaction to the Sunday Times cartoon.

The outcry was instantaneous. 270 outraged people complained to the Press Complaints Commission. Rupert Murdoch, whose News International owns the Sunday Times, tweeted an apology for the cartoon he deemed ‘grotesque and offensive’. Numerous Jewish organisations demanded an apology from the newspaper. Following a meeting between these organisations and Sunday Times representatives, an apology was issued, with the paper deeming the cartoon’s publication a ‘terrible mistake’, and reasserting its abhorrence of anti-Semitism.

The media revelled in the story. Articles, radio discussions, blogs and tweets agonised over whether the cartoon is actually anti-Semitic. Some disparaged those who have spoken out against it for using the label of anti-Semitism to censure criticism of Israeli policy. Others argued about whether the timing of the cartoon was the main cause for offence or the actual content, and many ferociously debated the ‘blood libel’ implications.

So is the cartoon anti-Semitic? Is the blood libel reference relevant? Can one protest against such a cartoon’s publication without inhibiting free speech? Was the timing the main problem?

Personally, I do not think the intention of the cartoon was anti-Semitic. The cartoonist, Gerald Scarfe, a veteran of British cartooning, typically uses bloody imagery in his work, a fact that was underlined by the newspaper in its initial defence of the cartoon’s publication. In other words, Scarfe hasn’t singled out the Israeli PM for vitriol, but often depicts various public figures in violent blood spattered images. Scarfe further asserted in his own defence that the cartoon was aimed solely at Netanyahu and his policies, not the whole Jewish nation. Haaretz commentator Anshel Pfeffer observed that there is no Star of David attached to Bibi, nor is he wearing a yarmulke, which, in classic anti-Semitic propaganda, are indicators that the image refers to all Jews. Some people protested against the size of Bibi’s nose in the cartoon, but this I chalk up to techniques used in caricatures, namely, to take the individual’s features and emphasize them hyperbolically, as this image does.

With regards to the accusation of blood libel (essentially the idea that Jews harvest the blood of gentiles for their own uses, particularly in religious rituals), defenders of the cartoon assert that Scarfe’s image bears no relation to the standard blood libel picture of the cherubic gentile child slaughtered by a bloody, hook-nosed Jew.

It is all very well for Scarfe to claim that he has not treated Bibi differently from any other world leader. It is also very well that he insists his image is not referring to all Jews. His intentions may certainly not have been anti-Semitic. But Scarfe should be aware that artistic intent is not always congruent with the reception of the art itself, or the response it evokes. Could he really be so ignorant as not to realise the abhorrent associations of such imagery when applied to a Jewish leader? As one Guardian reader succinctly commented in an internet response:

“To most people these cartoons are just that, cartoons. To Jews they are reminiscent of the early stages of anti-Jewish sentiment that very often led to pogroms and far worse all over Europe over centuries.”

Any individual with knowledge of Nazi propagandist cartooning, or the unashamedly anti-Semitic images published daily in the Arab Middle Eastern press, would instantly associate this cartoon with those images and those attitudes.

It is no surprise then that some complained that the most egregious offense was the publication of the cartoon on Holocaust Memorial Day itself. But surely a cartoon that people would connect with Holocaust imagery is wrong and despicable whenever it appears?

“Look at the cartoon and judge for yourself.”

Some have argued that this image has nothing to do with the blood libel, but as the editor of the Jewish Chronicle Stephen Pollard suggested in a BBC radio discussion, ‘look at the cartoon and judge for yourself whether Netanyahu is depicted as revelling in the blood of Palestinians’. Those who object to the blood libel invocation declare that it is a medieval myth irrelevant to contemporary cultural discourse. They imply that Jews use the blood libel line as a gag for critics of Israel.

Free speech is an important value, and Jews champion it. Clearly none of the organisations that protested said that Israel cannot be criticised, nor did anyone attempt arson attacks on Scarfe’s house or the offices of the Sunday Times. But how ill-considered to use an image that has such vile associations when applied to Jews.

Furthermore, the cartoon is based on untruths, very much like the original medieval blood libels. In an excellent article from the London Jewish News, Charlie Wolf points out that political cartooning is supposed to ‘expose truths through a lens of distortion that shines a light on the wrongs of society’. Scarfe’s image, however, falls into the tropes of media myopia in relation to the Israeli-Palestinian conflict. Steve Bell, another cartoonist whose work is similar in tone to Scarfe’s, who defended the cartoon in the above mentioned BBC radio discussion, asserted ‘The problem with the Zionist lobby is that they never acknowledge the crime of ethnic cleansing upon which the state was founded’*. This appallingly one-sided and ignorant attitude is sadly widespread, and is another facet of the ideas the cartoon suggests. When an editor prints a cartoon that implies a security wall that has saved the lives of hundreds of Israeli and Palestinian civilians has been built through the bloodshed and murder of Palestinians, and when that editor believes this image will resonate with his readership, the alarm bells should start to ring. Loudly.

In a society that claims to be tolerant, freedom of speech needs to be tempered with tact and sensitivity. Cartoonists and journalists can criticise Israel as much as they want, but their criticisms must be based on fact. And even if they are based on fact, their artistic metaphors should steer well clear of those that evoke classic patterns of Jew-hating propaganda. If not, they should not be surprised when they are associated with anti-Semitism and bigotry because ultimately, that allegation may resonate.

* As Charlie Wolf points out, apart from this point being irrelevant to the discussion that was taking place, the statement is simply untrue;

“Israel was not founded on some sort of racial purity…the local Arab population was invited to stay and be part of the dream of building an oasis in the desert; the Arabs who stayed have full rights. It was, in the vast majority, the Arab and Palestinian population who left in the hope Israel would be annihilated and it is they who would, they hoped, return to an ethnically cleansed Israel. Meanwhile…750 000 to a million Jews living…across the Arab world were kicked out against their will, leaving behind rich tracts of land (some estimate acreage six times the size of the State of Israel)…Where are the cartoons on their plight?”

When Jews Were Funny

Top Neil Simon Quotes and Excerpts
It Takes A Lot Of Faith To Be An Atheist
How Instagram Brought Back This Nostalgic Soup
What Makes Eli Run?
Comments
MOST POPULAR IN Jewlarious
Our privacy policy