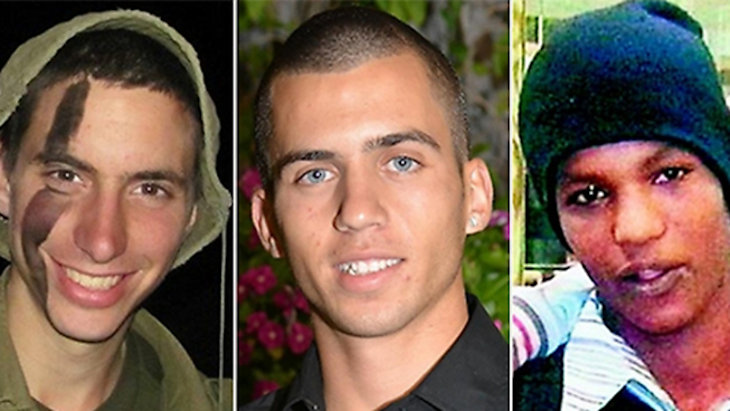 Six years ago this August 1, 23-year-old Hadar Goldin, a second lieutenant in the Givati Brigade commando unit of the Israel Defense Forces, was abducted by Hamas fighters two hours into a humanitarian cease-fire during Operation Protective Edge, the third Gaza war in six years.

At 9:15 am on that Friday morning, soldiers of the IDF headed toward a house in Rafiach in the Southern Gaza Strip which served as an entrance to a tunnel that reportedly led into Israel. As the IDF troops advanced, a Hamas fighter emerged from the tunnel and opened fire. Major Benaya Sarel, 26, and Staff Sergeant Liel Gidoni, 20, were killed. Hadar Goldin was captured and it was unknown if he was dead or alive. After Hadar was reported missing, the IDF used the highly controversial measure known as the “Hannibal Directive” and they fired at the area where Hadar had last been seen in an attempt to prevent Hamas from taking him captive.

Hadar’s twin brother Tzur was serving in Gaza at the same time. He was commander of the rescue force that evacuated soldiers who had been wounded or killed. Tzur had received the call to rescue Hadar but was called back when it was realized that he was Hadar’s brother.

The day after this incident, the Chief Rabbi of the IDF, Brigadier General Rafi Peretz, declared the death of Lt. Hadar Goldin. This decision was made by a special board, headed by Rabbi Peretz which examined the details of the incident and related to both Jewish law and medical considerations.

The Goldin family then announced to the large crowd standing silently outside of their home that they had accepted the decision of the board. They thanked everyone for coming and asked the public to attend the funeral of their son. A funeral was held for Hadar using a few sparse remains—tissue on clothing found by the Israeli military in the Hamas tunnel. It is a torment for the Goldin Family not to be able to inter his body according to Jewish law.

One of the people that Hadar left behind was his fiancé, Edna Sarusi. At his funeral she said, “I so wanted to be your bride, Hadar.” She described how proud she was of him when witnessing Hadar awarding berets to his soldiers at a military ceremony. “I saw that they are your children and you are so proud of them, and how much they love you. I stood there and cried and burst with pride.”

Or Cohen, who served in the same army unit as Hadar, also spoke at the funeral. “He became my commander and he was also my friend. I would seek his advice on everything. This is the guy who was willing to wait while others ate first, or if I wanted to talk to my girlfriend, he would let me use the phone first. Hadar was the person that everyone wanted as a friend and as a commander.”

In The Washington Post his parents wrote, “Hadar…was a gifted young man, a teacher and artist with a winning smile. He was also a budding Talmudic scholar whose notebooks were published posthumously. The death of one’s child is the most painful loss and finding true comfort will never be possible. But our loss has been made even more devastating because Hadar’s body has not been returned.”

Twenty-year-old Staff Sergeant in the Golani Brigade, Oron Shaul, fought with his unit in a brutal battle over the Gaza

City neighborhood of Shejaiya on July 20, 2014. He had left his Armored Personnel Carrier (APC) in order to repair a broken part. Hama militants started firing on the APC and took Oren prisoner. At first, Oron was designated as Missing in Action (MIA). On July 25, 2014 his death was formally confirmed by Rabbi Peretz based on evidence from the scene. The family was told that he was designated a fallen soldier whose place of death is not known. Twelve other IDF soldiers were killed in the fierce battle.

The press reported that Herzl Shaul accepted the army’s conclusion about Oron. But his mother, Zehava, believes that he is still alive. She says that Oron is being held captive by Hamas like Gilad Shalit, who was held by Hamas for five years. He was returned in 2011 in a hotly debated prisoner swap that allowed more than 1,000 Arab prisoners to go free.

“How can you determine death when he’s in the hands of Hamas? I want Oron. The government and the defense minister sent him to this operation. They need to bring him back.”

“It’s the hardest thing,” said Zehava. “There’s nothing harder than uncertainty. Every day the hole in my heart gets bigger. Every day I say when I get up in the morning, ‘What have I done to bring back Oren?’ There’s no one to talk to.”

Herzl Shaul passed away on September 2, 2016 from colon cancer at the age of 54. The night before, he bade his firstborn son, Aviram, to promise his father that he will do everything in his power to have Oron’s body returned to Israel. Before Herzl passed away, he penned a letter to his son Oron, showing that he had never lost hope that his son would return alive.

I cannot give up because I want to make it to the moment I have been dreaming of since the day you were taken. The moment when the Prime Minister and IDF Chief of Staff call me and say, “Herzl, Sergeant Oron Shaul of the Golani Brigade is coming home from the war tonight.”

My beloved Oron, if you see this letter when you return, they will certainly tell you the difficult times that we suffered until you returned from captivity… but my request is that you bear no grudge or anger. Do you know why? Because there is no nation on earth like the Jewish people.

I am certain that this wonderful nation will not allow your mother and your brothers to be lonely for a moment, even if I do succumb to this disease. Do not ever forget this. You should be proud of this nation, and I expect when you return that you will help and give in every possible way to others who need help.

Hamas is holding two additional Israeli citizens – an Ethiopian Jew and a Bedouin who have mental health issues. Avera Mengistu of Ashkelon crossed into Gaza by foot on September 7, 2014. Hisham al-Sayed, from the southern town of Hura, entered the Gaza Strip on April 20, 2015.

Avera is the fourth of ten children born to Haili and Agumesh Mengistu. He made aliyah with his family at the age of five. He grew up in a low income neighborhood in Ashkelon. His mother cleaned houses and his father became chronically unemployed. In 2011, Avera began to experience mental health issues following the death of his older brother Masrashau. His parents divorced in 2012.

Avera’s mother , with a pained voice and a visibly tear-stained face, said in a video, “I just want my son back so I can see him. I want to see him alive. Even if he is dead I want to see his body. Who can I turn to? I am broken.”

The oldest of eight, Hisham al-Sayed was born and raised in the Bedouin village of al-Sayed, which became part of the

town of al-Hura in the Negev desert. His father, Sha’ban al-Sayed attempted unsuccessfully to involve his son in his construction business. Hisham’s mother, Manal, described him as someone who was never content with his life.

The bereaved parents of Oren, Hadar and Avera have expressed repeated frustration with the Israeli government’s efforts to negotiate the return of their children. “Hadar was abducted during a ceasefire that was violated by Hamas. Any other ceasefire that the Israeli government reaches without returning the soldiers is the continued abandonment of Lieutenant Hadar Goldin and Sergeant Oren Shaul in the hands of the enemy,” the Goldins said.

“All humanitarian aid which will ease the suffering of the Gazan civilians and the treatment of all Hamas officials who are sitting in our prisons should be conditional upon our sons being brought to, and buried in, Israel,” Professor Goldin stated.

The June 11, 2019 United Nations Security Council Resolution 2474 concerning people reported missing in armed conflict is a step in the right direction. Combatant groups are required to return remains, and member states and international organizations should observe the resolutions directives. The resolution stipulates that accountability for missing persons “can be among the components of the design and implementation of peace negotiations and agreements and peace-building processes.”

Hamas has sent out feelers about arranging a hostage exchange. In the past, all of their demands have been unrealistic. According to Israeli negotiator Yaron Blum, Hamas does not seem to understand that the Israeli public has changed and there will not be a second Shalit deal.

As much as they are campaigning to get Hadar and Oron back, the Shauls and the Goldins are fighting for something more basic – they just want Israelis to pay attention to their plight. Prof. Goldin calls for a return to basic values of not leaving the fallen, wounded or kidnapped behind.

Hadar would say, “You can do one of two things in life, You can be busy with yourself or you can help others.” Each of us can do something to help these four families, whether it be sending letters of support to family members, lobbying your country’s government to have Hamas abide by the UN 2474 Resolution, financially backing them (oversea trips to speak with various governments is a financial burden), publicizing the plight of the families and praying that this nightmarish situation ends.

Inside Sderot
Seeing Without Eyes
Why Shouldn’t We Eat Whatever We Want?
The Power Of Prayer
Comments
MOST POPULAR IN Israel
Our privacy policy
Aish.com Is Looking for Great Writers