Can Mr. Divorced be Mr. Right? 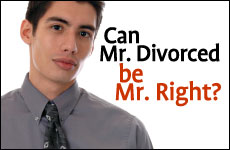 How do I know if the divorced man I'm dating is marriage material?

From a Jewish perspective, the purpose of dating is to evaluate whether or not a person is an appropriate life partner. From this vantage point, no one should really be dating if they’re not looking for a serious relationship. The same goes when dating divorced men.

Before you examine the issues surrounding dating a divorced man, it’s important for you to be clear about why you’re dating. If you are seeking marriage partner, then you should only be dating men who are also looking to get married. This applies whether the man you might go out with has been married before or not. If you want to get married, you need to make sure that you’re both on the same page before you agree to that first date.

The fact that he is divorced is irrelevant. Focus on your goal and stick to it.

The fact that he is divorced is irrelevant. Focus on your goal and stick to it. Don’t let the previous marital status of a potential suitor cloud your judgment. And don’t shy away from being direct about the fact that you are dating for marriage. Use your personality strengths to make your point. If you’re funny, say it a funny way. You won’t scare away the right guy by being up front and honest.

Related Article: Finding the One

Assuming that you’re both marriage-minded, let’s focus on the most important things to consider when you are evaluating whether or not someone is the right one for you.

One, are you genuinely attracted to this person? The fact that you are willing to date men who have been divorced is great. It means that you are open-minded and flexible. That being said, you do need to be attracted to someone in order for the relationship to ultimately work out. So make sure that you are before getting caught up in any of the other stuff.

Secondly, you need to respect the person you are dating. It’s hard to get full insight into another’s character on a first date, but there are some signs you can look out for. If you go to a restaurant, does he encourage you to order anything on the menu or does he make you feel materialistic for ordering a Coke instead of sticking with tap water to go with your side salad entree? How does he treat the waiter? Does he tip appropriately or theatrically complain about the slow service? If you get lost on the way home, is he willing to stop and ask for directions without getting angry at the suggestion?

How someone treats others is a strong indicator of how that person will treat you. Make it a priority to spend time with people in his life. Is he comfortable with having you meet his friends? His family?

Three, do you and your potential partner share common life goals? Are you both in agreement with respect to how religion plays a part in your life? Do you both want children? Are you willing to relocate if one person’s job demands it? If the guy is serious about his objective to get married, he shouldn’t get hives just from talking about the big issues. If he can’t, move on, whether he’s been married before or not.

Communication is the key to any successful relationship. You both need to lay all of your cards on the table before you agree to play the game. For example, does he have children from a previous marriage? If he does, how do you feel about that? You need to be honest with yourself about what you want from a life partner and be able to communicate this clearly. If you don’t see eye to eye on what you want from a relationship, don’t waste time and emotion.

There may be a variety of reasons as to why a man might not want to discuss why his marriage did not work out. Not all of these are red flags. He may be hiding something but it’s also possible that he is a great guy who simply does not want to speak disparagingly about his ex-wife. The key is to focus on the reason behind why he doesn’t want to go into details, not on the details themselves.

Keep the conversation about you and him, not about his ex-wife.

Keep the conversation about you and him, not about his ex-wife. If he got divorced because he was pressured by his family to marry someone he wasn’t really attracted to, he won’t likely make that mistake again. If he feels that his character traits did not mesh well with his prior spouse, he has hopefully learned from this experience as well.

Carefully evaluate his reaction to your desire to have a conversation about his divorce, and the subject of marriage in general. If someone is truly ready to move on, he will have some objectivity about his former situation and be willing to express his feelings about what happened. It’s a plus if he has worked on himself via professional counseling and used that experience as a tool for personal growth. If he gets defensive or avoids the discussion altogether, then that’s a red flag.

The lack of common life goals is a common reason so many marriages fail. People get caught up in the Hollywood version of marriage and don’t bother to discuss what they want from marriage in the first place. You both may be two great people, just wrong for each other. You can’t evaluate it if you don’t really know what’s truly important to you and where you are really headed in life.

Focus on attraction, character traits and common life goals and make sure you communicate honestly and openly before you even meet him for coffee. Tell him that these things are important to you and that you want to be sure you share the same perspective on life before embarking upon a relationship.

Know why you are dating and confirm that you are both dating for the same reason. These rules apply regardless of the prior marital status of the person you are dating. Anyone can make an error in judgment in a relationship. Your job is to do your homework and make your priorities clear before you go on that first date. The goal is to walk down the aisle with Mr. Right instead of wasting valuable time with Mr. Right Now.

Stop Looking for Your Soul Mate

When It’s Time to Say Goodbye to the Wrong Person
Evolution 2.0: The Coming Darwinian Revolution
Chukat 5782: Let’s Play the Blame Game!
The Sin of Moses: The Two Ways to Communicate
Comments
MOST POPULAR IN Dating
Our privacy policy