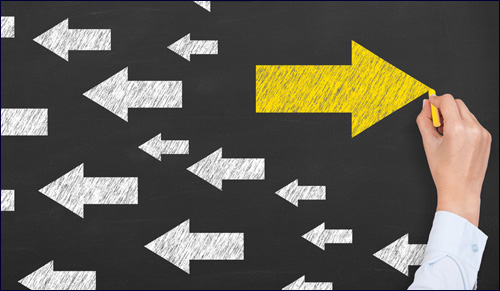 How to tap into the transformative power of the Jewish month of Elul.

Whether this is your first or 61st serious encounter with the Jewish month of Elul that leads up to the High Holidays, you might face this season of introspection and self-improvement with chagrin. And you wouldn’t be alone. We all have a long rap sheet of personal battles waged and lost.

“I’m going to stop gorging and eat like a human being.” “I’m going to put down my Smartphone and get a real life.” “That’s the last time I’m saying something belittling to my spouse.” “I’m going to make better use of my time.” Then we ignore our own better angels.

For many, the struggle is with deeper issues like faith in God. Do we seek to understand God’s message to us, or cry, “Why me? What did I ever do?” Do we accept setbacks and learn from them, or assert that “Someone’s gonna pay for this!”

How do we pull ourselves up by our own bootstraps when we’re the ones weighing down the boots?

The answer is to reframe what we’re trying to achieve when we set out on the road to self-improvement. Teshuva, the process of “return” to God and to our higher selves, encompasses all the challenges we outlined above. It’s about becoming a better spouse, parent and sibling. It’s about becoming more honest with ourselves and others. It’s about self-discipline, self-esteem and dignity. But it’s not about perfection.

The key is to join the battle and stay in it.

Many spiritual heroes in the Jewish world likewise tried and failed as they struggled to climb. Rav Yitzchak Hutner, Rosh Yeshivah of Yeshivas Chaim Berlin in the 1970s, speaks of the “battles, obstacles, slumps and regressions” encountered by the likes of the Chofetz Chaim, one of the greatest Rabbis of the early 1900s, and others. “Lose battles, but win wars,” he says. “I promise you…that you will emerge victorious.”

King Solomon famously declared, “For though the righteous may fall seven times, he will rise….” Falling doesn’t disqualify a person from the title of “righteous.” In fact, it is expected. Like a spiritual prize-fighter, he only loses the title if he stays down.

One step can change your reality.

Even though we learn as children that “The journey of a thousand miles begins with one small step,” we often doubt that there’s any value in our one small step. What does it change? What about the distance that remains? So today you stopped yourself one time from shopping online when you were supposedly doing your job. What did your one episode of restraint accomplish?

It changed your reality.

You stopped rowing in one direction and began rowing in the other direction. If you’ve ever rowed a boat, you know that those first few strokes in the opposite direction don’t do anything but bring you to a standstill. Then you start making headway.

In God’s view, your one small step is proof that you’re serious about your goal. It turns ephemeral thoughts into facts on the ground.

An apt comparison is a deposit on a car. A dealer is willing to hold a $24,000 car for you on the strength of a $1,000 deposit. That small fraction of the total price prevents him from selling it to another buyer who arrives an hour later with a pocket full of cash. It changes reality, because once you give him your $1,000, you’ve proven that “I’ve decided. This is what I want.”

The same is true with your one small step. By taking it, you prove that “I’ve decided that this is what I want.” And you’ve moved a millimeter closer to God.

The final puzzle piece is the power of repetition. When our impulsive self is in charge, we face a choice and think, “Just this one time won’t matter.” Acting on that impulse strengthens the wrong skill. The more times a person sneaks an extra cookie, the harder he finds it to ignore the bag of cookies. The more times he covers up with a lie, the harder it is to tell the truth.

For this reason, Maimonides advises that “All is according to the abundance of action.” This means that someone who gives $1,000 charity one time will not experience as much internal growth as someone who gives ten dollars a hundred times. Each time he reaches out to someone with his donation, he reinforces his image of himself as a “giver.”

With these tools, we can make the most of the month of Elul, a special time of favor for the Jewish people. This is the month in which God’s ear is inclined toward us, listening to our prayers and welcoming our efforts to live a more Godly life.

It’s the Jewish season of change, hope and renewal. There is never a reason to give up on ourselves. As long as God wakes us up alive and well each morning, we have an incontrovertible sign that He has not given up on us.

Click here to order Rabbi Kleinman’s new book, The Power of Teshuvah: An Effective Day by Day Guide, which will show you how to take advantage of the power of change, in just 5 minutes a day.

Elul: The Secret to Change

Elul: The 4 D's of Lasting Change

Rebbetzin Heller on the Opportunity of Elul: At Home in Jerusalem PODCAST

Second Chances: The Powerful Month Before the High Holidays
Bechukotai 5782: Divine Retribution
Behar 5782: Working to Live or Living to Work?
The Wholeness of Being Broken
Comments
MOST POPULAR IN Elul
Our privacy policy