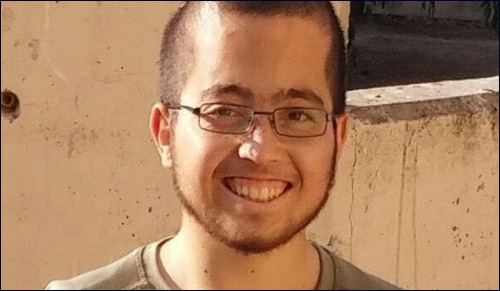 We buried a beloved son and soldier from our community who was killed in the horrific terror attack in Jerusalem.

The recent attack on the Jewish fast day of the Tenth of Tevet, in which an Israeli Arab citizen from East Jerusalem plowed his truck into a group of soldiers, murdering four young Israeli soldiers and wounding 17 others, has left us in an emotional upheaval and in deep mourning.

Our 20 year-old son who is a soldier in the IDF, was friendly with Erez Orbach, one of the four murdered soldiers. They went to the same local day school in Gush Etzion.

My son told me, “Erez was a great guy. He was always striving to do good, and he did volunteer work. He was smart, warm and always smiling." Due to busy army schedules they had not seen each other for about half a year, but for some reason on Sunday morning our son had thought of Erez. Our son received permission from his commander to be late to base in order to attend the funeral.

The evening of the attack, Rabbi Yosef Rimon, the Orbach family’s rabbi, sent out an email to the Alon Shevut community: “All of us are stunned, trembling, crying and broken…Erez would often turn to me with questions about Jewish law. From his questions I saw a young person who was searching for a mission, a lover of Torah who tried to do the will of God in this world.

“Erez was an example of a person who acts with amazing strength, and his spirit governed the physical. He had a low army profile (due to health issues) and was not obligated to serve in the army. Despite this, he volunteered in the army and achieved great accomplishments in the officer’s course in which he invested and succeeded. He was a volunteer in the Bnei Akiva Nachshon group in the community as well as in other things. His friends Eitan and Daniel spoke how he had been a true friend. He had been a friend who was always there for you, and he was loving and helpful.”

Rabbi Rimon concluded his email with the words that Erez included on every Facebook post, in the name of the Chazon Ish, “A person is obligated in his world, as long as his soul is within him, to try to go on and grow.” This certainly describes Erez.

Erez, who held American and Israeli citizenship, was the oldest of six children. After completing his yeshiva high school studies at Neve Shemuel in Efrat, he enrolled in the Maalot Yeshiva in Northern Israel. He fought to be able to volunteer in the army despite his health issues. His grandfather Moshe Orbach told Army Radio in an interview prior to the Monday funeral that Erez’s request to serve in the army had been rejected numerous times, but he continued to “fight to be drafted into the army.” He felt it was his duty to serve. His rank was raised posthumously to Second Lieutenant.

The two-lane highway which leads to the turn-off to the Kfar Etzion Cemetery was filled with bumper to bumper cars and buses heading to Erez’s funeral. Approximately 1,000 people attended the funeral. Eulogies were given by various family members – Erez’s father Uri, his mother Keren, his 12th grade brother Alon, his grandmother and an aunt – his commander and Rabbi Yosef Rimon. His mother spoke briefly and emotionally about how she was blessed to have had Erez for twenty years.

Rabbi Rimon spoke about the Talmudic dictum (Ketubot 111b) about how it is more important to show one’s teeth (smile) at a person than give him a drink of milk. Erez was a smiler. He was a person who exuded warmth and friendliness. Rabbi Rimon noted that Erez was often one of the first worshippers to come to the synagogue. The rabbi said that although Erez was not married and did not bring new life into the world, he did bring life into the lives of many.

Erez was laid to rest in the newly opened section of the cemetery which is designated for soldiers, the only soldier to be buried in this new section. It is my fervent prayer that he be the last.

Please pray for the recovery of all of the injured soldiers as well as for the welfare of their families and friends.