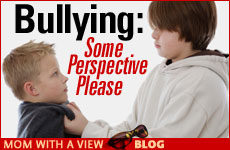 I think the school's zero tolerance towards bullying is going too far.

I still remember a story a friend told me about her college years. One evening she returned from the library to find someone’s bed in the hall of her dormitory. She started laughing – it was a silly joke but it appealed to her (still) adolescent sense of humor. Then she realized it was her bed. She called the campus authorities and had the culprits arrested.

Actually she didn’t; this was many years ago and she just kept laughing. She recognized a harmless, innocent prank.

I admit there’s a fine line between innocent pranks and meanness, between playful college initiation rites and dangerous hazing. But there is a line. And most people recognize it.

I recalled this anecdote when I read about a 4th grader in New York City who was suspended from school for placing a “Kick Me Please” sign on the posterior of a classmate. I think perhaps his real crime was lack of originality – isn’t that joke as old as the hills? Or at least me?

But in NYC today, this action violates the Discipline Code and is part of the “zero tolerance” policy against bullying.

Of course no one is in favor of bullying. But I think there are two important questions here.

One is “What is bullying?” Is every joke, every tease, every note taped to someone’s back without their knowledge (rabbit ears behind their head during a photo-op perhaps) bullying?

It may not be nice. It may not be the highest level of righteous behavior. But is it really bullying? Is it only a slippery slope from those notes to torturing cats or other forms of serious destructive behavior?

I don’t think so. I personally don’t think it merits a suspension from school. I think that responsible parents could speak with their child and resolve this situation in a much less confrontational manner. But no one asked me…

The second issue is whether this really helps the “victim” of this admittedly tasteless joke. We can’t rescue our children from every situation and nor should we try. Children need to learn coping skills. They need to find ways to deal with adversity. They need to learn to navigate the ups and downs of their friendships and even their relationships with their adversaries need to be strategically managed.

If parents or schools or other figures of authority step in every time, then the child is left without any tools for dealing with life’s challenges. And I don’t know that this “post-it” note even qualifies as one of life’s challenges.

I’m not diminishing the pain of the targeted 4th grader but growing up is difficult. Friendships are complicated. Having shepherded many girls through those years, I can testify to the tears and the hurt and the frustration. One day they aren’t talking; they next day they are best friends.

But I learned from the process. I saw that they all eventually grow up and find their way to healthy, mature, thoughtful relationships with others and that my intervention (on those few occasions where I just couldn’t help myself) NEVER made things better and sometimes even made them worse.

At school, teachers and principals should handle their students with intuition and understanding and not based on a rigid code. It is absolving them of responsibility as well. I can only assume that, having been reared under such a system themselves, they too lack the coping skills. Perhaps it makes their job easier not to have to think of a creative response and just fall back on the rules.

But the students are the ones who are being hurt. They all miss the opportunity to learn and grow from the situation. And I don’t think rules and codes can really solve the problem of serious bullying.

I’m not advocating these juvenile pranks; just a little perspective. And if you are going to indulge in these foolish (and harmless) activities, a little creativity please.

The Woman Next Door

My Challenge in Overcoming Baseless Hatred
The Promise Of The Land
Which Chat Are You On?: Parshas Behar/Lag Ba’Omer
Do You Like Slow-Cooked Food? Thank the Jews
Comments
MOST POPULAR IN Mom with a View
Our privacy policy