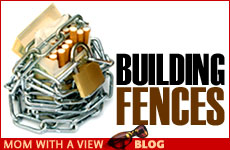 Don't rely on willpower alone to keep your resolutions.

Guess what percentage of New Year's resolutions is actually kept? If you ventured as high as 10% you were being overly generous. The latest research puts the figure at 8%. That's a lot of disappointment. That's a lot of credibility lost, relationships damaged, dreams unrealized.

It's not just a matter of willpower (although that certainly helps!) It's a matter of a plan and the proper tools.

One important tool that greatly increases the chance of successfully embracing a resolution can be extrapolated from Ethics of Our Fathers. We are advised to make a fence around the Torah.

A fence is a protection. It keeps unwanted elements out and valued elements in. It's a testimony to the preciousness of what we are guarding.

If we really want to change a behavior or a character trait, then we need to erect some fences that keep us far away from the fire. Although many people stand close to the tracks on the subway platform everyday, a more cautious individual stands farther back. He recognizes the slight risk and removes himself from that situation. (Lest you think this example unrealistic, a man recently did have a seizure and fell onto the tracks. His survival was due to the heroic actions of a fellow passenger.)

We pray every day that the Almighty not test us. The potential for failure is unfortunately too great. So we don't needlessly test ourselves either.

That's a fence. I haven't seen a study but I would feel confident guessing that one of the most common New Year's resolutions is to go on a diet. (I make that resolution every day so New Year's doesn't seem so special!) Since it is not possible to avoid eating, a fence that keeps us permanently out of the kitchen would be unrealistic (not to mention the rebellion it would incite among the rest of the family!). But perhaps we could avoid the bakery. Someone else could do that errand. To say "I will go to the bakery and just smell everything but not buy it or eat it" is not an effect long term strategy. The fence should say STAY OUT.

When working on not gossiping, I once decided that even though I couldn't say the words, I could still allow myself some of that illicit pleasure by thinking it. Of course thinking negative thoughts about others leads to...speaking them. The fence had to be not thinking it, changing the channel as soon as my mind went there.

There is a story told of a father who struggled to have patience with his children, especially when they were misbehaving (every parent's story!). In order to avoid saying or doing something he would later regret, he created a fence -- a punishment jacket. Before he would in any way scold or punish his kids, he needed to change into this special garment. (One imagines the children quaking in terror). Of course, once he took the time to change, he was able to calm down and make a more rational decision about how to behave. He may still need to scold or punish his children but it would no longer be an angry reaction in the heat of the moment.

In the Torah, Joseph had his own fence. Whenever he was tempted to behave inappropriately, he would call up an image of his father and that would stop him in his tracks. (I use a similar fence to keep my hand off the horn. I imagine that the driver of the car in front of me is an esteemed rabbi, and the consequent humiliation and embarrassment I would feel if I honked.)

The fence has to be to the situation and the individual. But we need to recognize that those values that are precious to us need fences and alarms and security guards as much if not more than so the people we love.

The fences should be erected with no concern for aesthetics. A white picket fence has too many holes, too many opportunities for intruders to sneak through. We need them thick and tall, and impenetrable.

If we follow the dicta of our sages and make a fence around our Torah, then we definitely skew the statistics about successful resolutions to a much higher percentage in the year to come.

When was the Last Time You Looked at Your Husband and Beamed?

Getting the Ear of the President
Big OnThe Little Things
Chraime Egg Boil
Is Grease the Word?
Comments