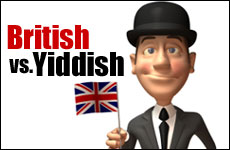 On my first trip to Britain, even though I spoke the same language, I felt very different.

On my first trip to Britain, years ago, something odd happened.

On my home turf, I’ve been “shushed” – on occasion. On the other side of the Pond, I’ve gotten, “Talk, luv! Delightful!” Blaming it on the noonday sun, I boldly blabbered forth, kvelling from the “haw haws” and never questioned. Hey, my bubbe always said, I was ‘a pistol.’”

Until that visit to the Earl’s house. (Not “Earl” the name, “Earl” as in “Duke of” except he was the real thing.) We were invited for the weekend to this Earl’s home-- on 2,000 acres. I was there only one day, when the Earl asked in his “chums,” who wanted to sit next to me and twelve shabby-chic nobles tripped over their Wellies for the honor.

In a British version of “Guess Who’s Coming to Dinner,” it was me -the Jewish New Yawkah.

OK, Why? (Even I realized I wasn’t that much of a “pistol.”) My British-born husband enlightened me.

“Well, maybe it was the fact that in a 500 year-old stately home you looked for the thermostat – and the closet. Or, you called the Scotch salmon ‘lox’ and told your Jewish pate joke. Or, when the Earl suggested you put on your ‘boots’ to chop branches, you wore your Oldman’s with the stiletto heels. Or last night, when the game warden of Kenya clucked about the heartbreak of rhino horn poaching, you did 10 minutes on Israeli bonds. Or –”

In a British version of “Guess Who’s Coming to Dinner,” it was me. “The Jewish New Yawkah.” Like Roswell aliens, while the British have heard we exist, to actually capture one and hear “it” was a coup worthy of a place in the Guinness Book of Social Oddities.

Fortunately for you, dear readers, I also came away with a few insights of my own. And as a public service, as always, I share them with you now…

British: Any sound above 10 decibels, e.g.: “You’re tearing my heart out!” may: a) appear to be making a “fuss;” b) reflect badly on the Queen, the BBC, and/or the prior war effort.

Yiddish: Any sound below 10 decibels is strictly reserved for health questions, as in “A headache?! Pssst. It could be an early warning sign.” Otherwise, making a tumult reminds family, friends, and those in nearby cities how much we care. True, our kishkes may churn, but bile-ratios are maintained through a regular diet of Maalox.

British: God made temperature to be endured. Therefore, any attempt to change, alter, or futz with thermostats is not only anti-Nature, but unpatriotic. If the Queen can “muddle through” shivering and shvitzing, the least one can do is quake in front of an exposed uni-directional non-functional radiator. One drawback is the unfortunate scalding of house pets.

Yiddish: Like a finely tuned Stradivarius, we are finely tuned to an indoor/outdoor temperature of exactly 74 degrees. At 76, you’ll hear, “Turn on the air before I chalosh!” At 73 degrees? “You feel that draft on my neck! Pneumonia, I’ll get!” We believe that if God didn’t want us to have central air, we’d all be lizards.

Exception: Lawns. The British are gaga over grass. Dressed in bionic gloves, chainsaw helmets, and body warmers, they mow, hoe, prune, weed, seed and will trek 30 miles to see a mutant dandelion.

Yiddish: Style: “Gutting.” As no house can truly reflect “us,” we look for potential, then hire Gentiles to break down, build, and move walls and ceilings. Our MBA (Minimum Basic Accouterments) includes central air, microwave, sub-zero fridge, blue washer-dryers, garbage disposals, air purifiers, and the right decorator who can feng shui – in tan. We don’t garden. We landscape, then point at it through our hermetically sealed, Country French sliding doors – in tan.

British: In my experience, the British studiously avoid any food that, when taken together, as in a meal: a) sounds/tastes good; b) consists of more than two food groups, one being an internal organ; c) has a visible filling beyond a cucumber. Much like coal, food is fuel to ward off rising damp (their walls shvitz from the chill) which is why traditional fare includes: glutinous porridge, tripe, yeast paste, toad in the hole, and 50 varieties of blood sausage. Needless to say, they use a lot of brown sauce.

Exception: Starting at birth, the average Brit consumes more chocolate than Switzerland. This does not help their dental hygiene.

Yiddish: Food is love. Therefore, the more food, the more love. We Jews are suspicious of any food when taken together, as in a meal that: a) consists of fewer than five food groups (batampte, gezunta, you can plotz from it, enough already, Alka Seltzer); b) can’t feed the Jewish population of Uruguay (should they drop in). As such, Jews are very involved with stuffing. Whether kreplach, kugel, gefilte fish, holishkes, or corned beef on rye, our stuffing, must be high, filling, and like love, be kishke-friendly.

British: Brit-parents take what they get. Any attempt to correct, say, crooked teeth, a crossed-eye, ears like satellite dishes, is fooling with Mother Nature. If however, a child can say, “Please, ma’am may I be excused?” without a glottal stop, and knows how to use a fish knife, no one will notice his ears are waving in planes.

Yiddish: Jewish parents believe in being pro-active! Should, heaven forbid, a child come into the world with a bissel shloomp, hump, weakish chin, or unsightly mole, the caring Yiddishe parent, after holding a small conference with the medical staff of Mt. Sinai, will spring into action and lop. After all, even the smallest pilke could lead to play group ostracization, which could severely compromise the kinder’s self-image, and eventually lead to career in manual labor.

There you have it. Proof positive that if America and Britain are two nations divided by a common language, the Yiddish and British are separated by a DNA divide that would confound Darwin.

Laughter Yoga: A Real Stretch
Vayelech 5783: Regret and Repent
Rabbi Sacks: Focus On the Important, Not the Urgent
Put Your Foot Down: Are Human Feet Poorly Designed?
Comments
MOST POPULAR IN Jewlarious
Our privacy policy
Aish.com Is Looking for Great Writers