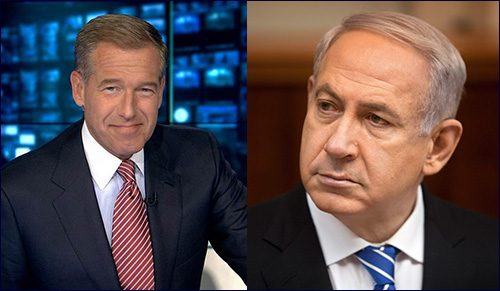 Brian Williams is getting the condemnation he deserves. Why isn’t The New York Times?

Lying is much in the news these days.

For the past week the American public has become much enraged. One of the most prominent news anchors was just revealed to have fabricated supposedly heroic exploits which in fact never happened.

Brian Williams, our longtime purveyor of the nightly news on NBC, it turns out lied to us. He was never under helicopter fire while covering Iraq. He never saw bodies floating below his hotel window in New Orleans during Hurricane Katrina. Deceived and disillusioned, there’s a loud cry for his dismissal.

Williams’ lies may not have had serious consequences. After all, they were no more than egotistical boasting, intended to boost his image. Yet many believe he must be fired. His profession demands it. Journalists above all require credibility. Lying isn’t merely a moral failing (as the Torah says, “Distance yourself from falsehood” (Exodus, 23:7); it destroys the sole claim to trust in the accuracy of reporting. We may not necessarily subscribe to the severe dictum of Immanuel Kant that “By a lie a man annihilates his dignity as a man” but we almost certainly agree that distorting the truth disqualifies anyone from the ranks of respectable journalists.

What makes this brouhaha so astounding though is that it comes at the very same time when another far more serious violation of journalistic integrity seems to be almost entirely ignored. When the source of the lie isn’t one man but the supposed paragon of newspaper excellence around the world, there is hardly a murmur of outrage, even though the stakes involved by the falsehood carry global significance.

We’ve all been following carefully the rift in relations between Israel and United States. It is a painful moment which threatens the friendship between two allies that share a commitment to democracy as well as fundamental values. The Israeli Prime Minister is profoundly worried about the possibility of a nuclear capable Iran. Indeed, for Israel it is an existential issue going to the heart of its very survival. For this reason, Netanyahu welcomed the invitation of Speaker John Boehner’s invitation to address the Congress of the United States. Here was a golden opportunity to explain Israel’s fears and, with the insights of its universally agreed excellent intelligence sources, to offer its assessment of present negotiations with Iran.

The New York Times however revealed that a grave breach of etiquette and respectful procedure must torpedo Netanyahu’s appearance. As the Times put it, “It was a breach of protocol and diplomatic rules to accept the invitation without first notifying the White House.” That supposedly outrageous behavior became equated with “Israel spat in Obama’s face”, a talked about boycott of Netanyahu’s speech if it were to take place and a war of words - all because of what was depicted as a an egregious insult on the part of Israel’s Prime Minister for accepting an invitation to speak before Congress without prior notification to the White House.

But remarkably enough, that was a lie. A lie? But we’ve all read so much about Israel’s disrespectful behavior. Could the New York Times possibly have published an untruth? Ah, the wonders of that little hidden paragraph which can appear hidden somewhere in the pages of a later edition – and with the wonders of the Internet sometimes not even in a printed version of the newspaper but in an online edition, seen by a very few but sufficient to deny culpability for being the source of a lie of monumental consequences.

After pushing the story for days, the online edition of the New York Times gave us a clarification. On January 30 in the online version of the article only, stated:

Correction: An earlier version of this article misstated when Prime Minister Benjamin Netanyahu of Israel accepted Speaker John A. Boehner’s invitation to address Congress. He accepted after the administration had been informed of the invitation, not before.

Here’s a “clarification” which changed the entire story. It removed any stigma from the Israeli Prime Minister. By all accounts this ought to have been front-page news. Yet it didn’t even make it to the back page. It seems there’s now a new category for the newspaper dedicated to “all the news that’s fit to print” – the news they don’t want you to really know about and is therefore only fit to go online.

Let’s be clear about lies. John Ruskin said it succinctly: "The essence of lying is in deception, not in words.” The Bible said it and felt so strongly about it that it included as one of the Ten Commandments: “Thou shalt not bear false witness against thy neighbor” (Exodus 20:13).

How do we explain the huge outcry against Brian Williams and the almost total silence in response to the deceitfulness of the New York Times?

Lies and journalism are incompatible. Perhaps Brian Williams deserves compassion for his foolish attempt to build up his reputation. But surely the New York Times merits no similar sympathy for its callous disregard for truth - a lie that jeopardizes not only American- Israeli relations but the fate of a world which will face a nuclear armed Iran.

Muslim and Jewish Families Save Each Other, 50 Years Apart

What Happened When I Took a Cell Phone Break for 730 Days
Near Death Experience Panel
The Western Wall: The Heart of the World
Ask the Right Question: Tisha B’Av
Comments