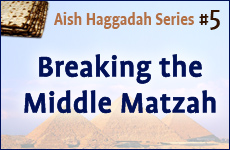 Why is this one the 15 Steps to Freedom?

In many ways, children are the stars of the Seder night. Jewish law states that the Seder should begin as soon after nightfall as possible in order to insure the participation of children. Various customs, including spreading nuts on the table, exist specifically to arouse the curiosity of children and to stimulate their active involvement.

Likewise, the hide-and-seek game with the Afikomen. The annual Afikomen hunt has a way of transforming even the most bleary-eyed youngster into an exuberant Seder enthusiast.

Like a child on the trail of the Afikomen, we too must see ourselves as seekers -- seeking for truth and meaning, for the kind of fulfillment that lasts longer than a week, and for riches that transcend the material. And, like children in search of the Afikomen, when focused on the urgency of our search, we will experience our efforts not only as the price of life but as its thrill and pleasure.

Planning for the Future

We break the middle matzah, and put it aside to serve later as the Afikomen. Why do we break the matzah now if we don't need it until later? And why is this one of the 15 steps to freedom?

Because a key to freedom is to anticipate the future and make it real. The definition of maturity is the ability to trade a lower pleasure now for a higher pleasure later. Children lack this perspective and demand instant gratification. (Why not eat 10 candies now? Because you'll get a stomach-ache later!) The challenge of adulthood is training ourselves to look at the long-term consequences. (Why not intermarry now that I'm in love? Because the future portends family tension, confusion for children, and estrangement from one's roots.)

"Who is the wise man?" asks the Talmud. "The one who sees the future." We break the middle matzah, not for now, but for later. Because true freedom is a long-term proposition.

We break the middle piece of matzah. The larger piece is wrapped and put aside to serve later as the Afikomen. The smaller piece returns to its place where it continues to fulfill its function despite the loss.

Quite often our inability to give and to share is the product of a skewed picture of reality. Many of our limitations are only perceived limitations. So put aside half of that matzah. No, this is not a suggestion that you go out and intentionally smash your second car, trade in your microwave for a Bunsen burner, or cut your sleeping hours in half. But it is a suggestion to pause.

If your brother or sister needed some of your time, money, or a piece of your heart, would you not find a way to give it to them? Humankind is a family and we are all brothers and sisters. Just as there are plenty of needs, so are there plenty of resources. If only we realized how much we had to give, and how much we truly want to give.

Imagine this: One day you get a phone call. Your relatives from Russia have just arrived with their three children. No money, no possessions. They don't speak the language. The local federation has exhausted its funds, and they are counting on you.

What would you do? Surely you will find a way.

Door for Elijah and Hallel

Baruch Hamakom
Should I Break Up, Get Engaged or Keep Dating?
Time Is Your Precious Commodity
A Constant World in Flux
Comments
MOST POPULAR IN Passover
Our privacy policy