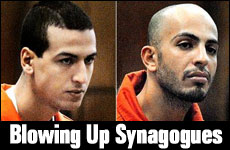 The recent arrest of two NY terrorists reminds us to give thanks to the Guardian of the Jewish People.

The latest marchers in the long parade of people anxious to murder in the name of a religion of peace are two feckless young men, Ahmed Ferhani, 26, and Mohamed Mamdouh, 20, natives of Algeria and Morocco, respectively. They were arraigned last week in New York on charges of plotting to blow up synagogues.

Mamdouh, according to prosecutors, is on tape saying he hated Jews; and Ferhani, according to the complaint, planned among other things to use hand grenades; and relished the thought of “pulling the pins and throwing them into the synagogue.”

That image — now, thankfully, confined to harmless words in court papers — conjured in my mind a similar one, of another time, another synagogue, and other hand grenades.

It was in 1943. After more than three years of German control over France, the Great Synagogue of Lyon continued to function. That December 10, however, the Lyon Milice, the Vichy government’s shock troops, decided to put an end to Jewish worship in the city.

The shul’s rabbi survived the war to tell the tale, which is recorded in a book about Klaus Barbie, the infamous “Butcher of Lyon” (and the title of the book, by Brendan Murphy – Empire/Harper & Row, 1983). A member of the Milice quietly entered the rear of the sanctuary that Friday night during services. Armed with three hand grenades, he intended to lob them into the crowd of worshippers from behind, and to escape before the explosions. After silently opening the door and entering the room unnoticed by anyone but the rabbi (who stood facing the congregation), he pulled the pins.

But what he saw at that moment, grenades armed and the crowd of Jewish men standing with their backs toward him, so shook him that he froze, wide-eyed and uncomprehending, for a crucial moment, managing only to toss the grenades a few feet before fleeing in shock. Several worshippers were injured by shrapnel but no one was killed.

What had so flabbergasted the Nazi was the sudden, unexpected sight of his intended victims’ faces, as the congregation, as if on cue, turned as one on its heels to face him.

The would-be mass murderer had entered the shul precisely at “bo’i b’shalom,” the last stanza of Lecha Dodi, when worshippers traditionally turn toward the door to welcome Shabbos.

I’m not a fan of happy-ending or just-desserts stories. So many of them simply aren’t true or, at very least, are not definitively sourced or corroborated. What’s more, every story that doesn’t seem to end happily or neatly testifies no less loudly to God’s plan. Divine Providence is every bit as operative in the missed plane that didn’t end up crashing as in the one that did.

But when an account appears not in an inspirational speech but in a well-researched history book, duly detailed and dated, it can’t help but draw our attention. Not as a “fortification of belief” but as special cause for those who already believe to feel keener gratitude to the Creator for His kindness.

The story of the Lyon shul often visits my mind on Friday nights in shul, as I myself turn to welcome Shabbos. Its ending is compelling reason to give thanks, even 68 years later, to the Guardian of the Jewish People.

As is the nipping-in-the-bud of the plans of the North African terrorist wannabes currently sitting in detention. (And, if their guilt is established, may they remain there for many years to come.)

No mortal can identify the special merit of the Lyon worshippers. Maybe it was the fact that the city’s Jewish community had provided sanctuary for Jewish refugees from other parts of France. Maybe it was the very fact of the synagogue stubbornly continuing to hold services during such trying times. Or something else, unknown. Or many things. But merits there were.

And no mortal can know where the next plot against Jews is currently being planned. What we can know, though, is that we have a Guardian. And that we must strive to merit His protection for the future.