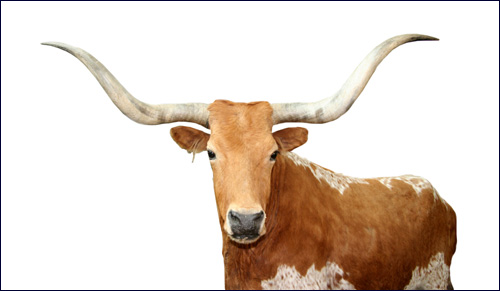 A shofar blower, in more ways than one, must be willing to take the bull by the horns.

A shofar blower may be the only Jew who is expected to make a lot of noise in shul.

A shofar is not really a musical instrument but it could be described as the kosher clarinet, Hebrew harmonica or Jew Kazoo. A shofar may be harvested from certain animals, most notably rams, and are sold in most Judaica stores, especially those located on Cape Horn.

A shofar blower may be the only Jew who is expected to make a lot of noise during davening. In fact, the kosher cacophony produced by shofar blowing is talmudically required, though the key mitzvah is for the audience to hear each and every shofar blast. Many rabbis wish a similar rule would apply to their sermons but, alas, there is no formal requirement to listen to a rabbi's speech. There also is no formal requirement to serve toothpick-stabbed herring at a kiddish, but that one seems to go without saying at most synagogues.

Shofar blowers train all year round for a single event, sort of like Megillah readers, Sukkah builders and dreidel spinners. Shofar blowers arguably receive the most attention but, ironically, they are neither blowhards nor full of hot air. They usually are relatively mild-mannered and modest and, in further irony, rarely blow their tops or toot their own horns.

Many shofar blowers offer their services gratis and do not act like divas. They may only demand only (i) a free seat in shul, (ii) bottled water and (iii) entry into a witness protection program in the event an angry ram comes looking for its missing appendage. In that connection, a shofar blower, in more ways than one, must be willing to take the bull by the horns.

Many congregants enjoy critiquing a shofar-blower's performance, offering their own blow-by-blow accounts as though they are reporting for the Daily Bugle. Consequently, every wrong note, muffled sound or incomplete blast is magnified on a very public level and could be a crushing blow to the shofar blower's career. It's a lot of pressure and scrutiny, which can make for a (trum)petrifying and (trom)bone-shaking experience.

Shofar blowers are forced to save their best for last and somehow must muster the power and precision to pull off the lung-busting, ear-splitting and death-defying (or deaf-defying) Tekiya Gedolah. It's sort of like when the legendary Whitney Houston sang her massive hit, “I Will Always Love You,” which required her to breathlessly belt out the song’s epic end. (“And I-I-I-I-e-I, will always love youuuuu!) The Tekiya Gedolah, however, has its limits. It should not last as long as "Stairway to Heaven" or "Bye, Bye, Miss American Pie."

To be clear, there is no substitute for hearing the shofar blast. For example, the blowing of the shofar cannot be replaced by:

The shofar blowing experience can be somewhat confusing for the uninitiated so let's explain it through song. Please sing the lyrics below to Bob Dylan's classic tune, "Blowin’ in the Wind":

Bottom-line: Even if a underperforming shofar blower needs a pep-talk, scolding them as follows actually may backfire: "Hey Mr. Shofar Blower, you really need to do a good job this year . . . so don't blow it." (Care to rephrase that?)

WouldJew Believe #19
Should I Break Up, Get Engaged or Keep Dating?
Time Is Your Precious Commodity
A Constant World in Flux
Comments
MOST POPULAR IN Jewlarious
Our privacy policy