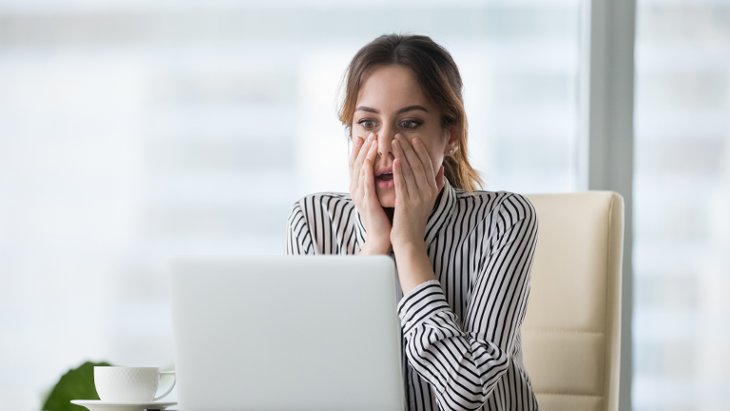 Remember that study showing religious children are more selfish than non-religious kids? Turns out it was wrong.

The title of the study, published in the journal Current Biology in November 2015, was on the dry side: "The Negative Association Between Religiousness and Children's Altruism across the World." The text was even drier. But the findings, by University of Chicago neuroscientist Jean Decety and his colleagues, proved irresistible to journalists, who gave them wide play under headlines likely to grab readers' attention:

Scores of media outlets reported on the Decety paper, which compiled data from more than 1,100 children in the United States, Canada, China, Jordan, Turkey, and South Africa. The researchers measured the generosity of the young children by giving each one a batch of attractive stickers, then inviting him or her to give away some of the stickers to other children. The more stickers the kids shared with others, the more altruistic they were deemed to be. According to the published results, the children of religious parents were less likely to share their stickers than children from non-religious households. 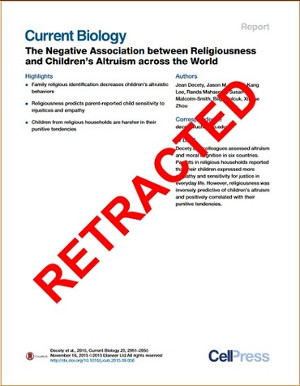 The study, concluded The Economist, suggested "not only that what is preached by religion is not always what is practiced . . . but that in some unknown way the preaching makes things worse."

Except, as it turned out, the study was wrong.

Azim Shariff, a professor of social psychology, was perplexed by Decety's analysis, which seemed to fly in the face of considerable evidence that religious people tend to be more likely to exhibit altruistic, charitable, and pro-social behavior. In his 2006 book Who Really Cares, the public policy scholar Arthur Brooks, citing years of social-science data, showed that religious practice correlated with higher rates of volunteering, donating blood, aiding the homeless, and giving money to secular charities.

To better understand how Decety's team had come to such a strikingly different result, Shariff asked to see their data. When he re-crunched the numbers, Shariff discovered a major blunder: The six countries in the study had been coded by number — 1 for the United States, 2 for Canada, etc. — and in calculating the global results, the researchers had inadvertently treated those country codes as mathematical variables. Needless to say, that significantly skewed the study's results. When Shariff re-analyzed the data without the coding error, the surprising findings vanished.

Current Biology published Shariff's correction of Decety's statistics in 2016. But references to the original paper continued to appear in the popular media. The Independent cited it in a 2017 article on the virtues of an atheist upbringing, for example. Buzzworthy ran a story on it ("Could Religion Actually Make Children Less Generous?") just two months ago.

Yet any reader who looks up the study in Current Biology will find the word "RETRACTED" stamped across each page in large red letters. In August, the journal formally disavowed the paper at the request of the authors. The study is now preceded by a note in which Decety acknowledges the fatal error discovered in his group's analysis. "We feel it necessary to explicitly correct the scientific record," he writes, "and we are therefore retracting the article. We apologize to the scientific community for any inconvenience caused."

To err may be human, but to admit error is sublime.

Why recount the saga of this particular study? Not to excoriate the villains of the story, but to point out that there are no villains. Everyone concerned behaved admirably. When Decety's paper was published, Shariff didn't denounce it — he asked to see the underlying data. Decety, unlike some researchers, promptly made the information available. After discovering the coding error that undermined the paper's validity, Shariff, rather than run to the popular media for publicity, submitted a sober, technical correction to the science journal where the study had appeared. And though it took a while, the original researchers conceded that their much-commented-on paper could not stand, and asked that it be retracted.

To all appearances, this happened without rancor or backbiting, without accusations of bigotry or bad faith, without demands that anyone be fired or silenced. Nobody dug in his heels and refused to budge from a previous position. There was no tribalism, no "cancel culture," no Twitter mockery.

This is how science, and indeed all scholarship, is supposed to work. Researchers get things wrong. Hypotheses don't hold up. A broad consensus turns out to be erroneous. Or mistakes creep into the math.

When that happens, a forthright retraction is a signal not of weakness but of intellectual integrity. When a paper is withdrawn by authors whose findings have been disproved, science and knowledge gain. Sure, it stings to be wrong. Yet if we never confronted mistakes, how would we ever recognize truth? To err may be human, but to admit error is sublime.

The Death of Phillip Seymour Hoffman