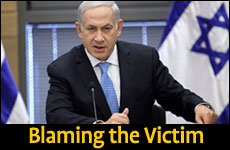 Why it's wrong to blame Israel for the collapse of the so-called peace process.

One of the most egregious signs of western irrationality and bigotry over the issue of Israel is the way in which its Prime Minister Benjamin Netanyahu is routinely scapegoated for causing the breakdown of the so-called peace process between Israel and the Palestinians.

This charge is based on the widespread fallacy that the ‘peace process’ has stalled because Israel keeps building more Jewish ‘settlements’ on ‘Palestinian land’. This reasoning is not only totally wrong but utterly perverse on the following grounds:

1) The actual reason for the collapse of the ‘peace process’ is that Mahmoud Abbas repeatedly maintains that he will never accept that Israel is entitled to be a Jewish state, hails Palestinian terrorists as heroes for murdering Israelis and does nothing to end the incitement to murder Jews disseminated in schools, mosques and media under his control. In other words, Abbas is not a legitimate interlocutor in any civilised ‘peace process’ since he remains committed to the eradication of Israel. Yet Netanyahu is blamed for the impasse.

2) It is only Israel that has made concessions in this ‘peace process’ (as noted here). The Palestinians not only failed to deliver what was expected of them under the Road Map but now, with their UN gambit, have unilaterally reneged on their previous treaty obligations. Yet Abbas is given a free pass while Netanyahu is blamed instead for the impasse.

3) The claim that the ‘settlements’ are the key to resolving the dispute is ridiculous. First, they take up no more than one or two per cent of West Bank territory. Second, even when Netanyahu froze such new building for ten months as a sign of good will, Abbas still refused to negotiate. Yet this is all ignored, and Netanyahu is blamed instead for the impasse.

4) The claim that the establishment of a Palestine state would end the dispute is also ridiculous. Such a state was on offer in 1948; Israel offered to give up more than 90 per cent of the West Bank for such a state in 2000; and an even more generous offer was subsequently made by Israeli Prime Minister Ehud Olmert. The Palestinian response was in every case war and terror. Yet all this is ignored, and Netanyahu is blamed instead for the impasse.

5) Whatever land Israel may choose to give up in its own interests, under international law Jews are entitled to settle anywhere in the West Bank. There is no such thing as Palestinian land and never was. The West Bank and Gaza never belonged to any sovereign ruler after the British withdrew from Mandatory Palestine; before that it was part of the Ottoman empire. Israel’s ‘borders’ are in fact merely the cease-fire lines from its victory in 1948 against the Arab armies that tried unsuccessfully to exterminate it at birth. It is therefore more correct to call the West Bank and Gaza disputed territory. Yet this history and law are denied and Netanyahu is blamed instead for the impasse.

6) The Jews alone have the legal – as well as the moral and historical -- right to settle within the West Bank and Gaza, a right given to them by the Great Powers after the First World War on account of the unique historical claim by the Jews to the land then called Palestine. This Jewish right to settle anywhere in that land was entrusted to Britain to deliver under the terms of the Mandate for Palestine – an obligation which it proceeded to break. Yet this history and law are denied, and Netanyahu is blamed instead for the impasse.

It is therefore as absurd as it is malicious to blame Netanyahu for the breakdown of talks between Israel and the Palestinians. Yet this is precisely what many in the west do – principally because, unlike Israeli politicians on the left, Netanyahu (who certainly has his flaws) is less prepared to play fast and loose with truth, justice and history while offering up Israel’s throat to be cut.

For this inconvenient obduracy he is branded as ‘right-wing’ and therefore beyond the pale and impossible to deal with.

That is presumably what lay behind the now infamous overheard exchange between Presidents Sarkozy and Obama – Sarkozy: ‘I cannot bear Netanyahu, he is a liar’; Obama: ‘You’re fed up with him, but I have to deal with him every day!’

This exchange tells us many things, none of them good, about the attitude of the Presidents of France and the US towards the Prime Minister of the country that is in the front line of western defence.

But in the UK, the Times showed yesterday morning that it too has now drunk the Kool-Aid over the Middle East. For just whom did it blame for this horrible exchange between Sarkozy and Obama about Netanyahu? Why – Netanyahu. Its leading article opined:

‘In fact the man who should be most worried by the Cannes table talk is not either of the participants, but the object of their complaint. For what has been exposed is that the leaders of two of the most important allies that Israel has not only dislike Mr Netanyahu intensely, but distrust him too.

‘... Though trust and good personal relationships are hugely important in diplomacy, they are not everything. Israel has existential worries, and understandably feels sometimes that it can rely only on itself. But this “ourselves alone” mentality has become distorted under Mr Netanyahu into what might be called “Millwall diplomacy”, after the famously belligerent soccer fans whose slogan became “no-one likes us, we don’t care”.

‘Israel needs to win friends, not lose them; to be sustained by its allies, not to alienate them. What the conversation in Cannes shows is that, in Mr Netanyahu, Israel seems to have the wrong leader at the wrong time. This newspaper hopes that either he can change, or if not, that he can be changed.’

So the spite displayed by the Presidents of France and the US towards Netanyahu, whom they have thus kicked in the back despite the fact that he has made concession after concession to Abbas who has never resiled from his own genocidal aims, is actually all the fault of ...Netanyahu, whom the Times wishes to punish further for thus being the victim of such malice by chucking him out of office unless he too starts playing the appeasement game.

One expects to read this kind of disgusting ‘blame the victim’ approach to Israel in newspapers of the left. The Times, however, used to be a staunch friend of Israel and was thus on the right side of history. No longer, it seems. Thus the terrifying confusions of our era deepen still further as the skies darken.

This article originally appeared on Melanie Phillips blog at http://www.dailymail.co.uk/.

The Truth about Jerusalem

The Land of Israel: Jewish History in a Flash

10 Facts about Hamas
Adam and Eve Were Vegan
Bechukotai 5782: Divine Retribution
Behar 5782: Working to Live or Living to Work?
Comments
MOST POPULAR IN Jerusalem and Israel
Our privacy policy