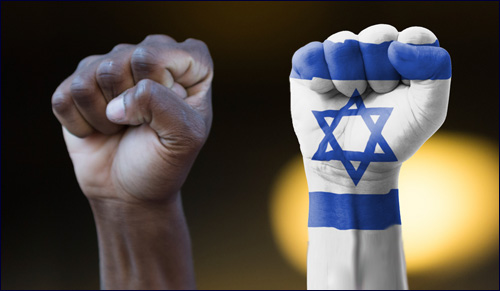 The striking and surprising affinities between the contemporary African-American and Jewish struggles for freedom and dignity.

“Black Lives Matter” and “Am Yisrael Chai” (The Jewish People Live) have more in common than many modern progressives or Zionists would like to admit. Just as the old spirituals of African slaves drew inspiration from the delivery of the Israelites from bondage (think, "Go Down Moses"), so too there are striking – if surprising – affinities between the contemporary African-American and Jewish struggles for freedom and dignity.

By exploring what African-Americans mean by their statement of defiance, we can illuminate our own; and by demonstrating our commonalities, we can reinvigorate the fightback against the hijacking of progressive politics by the anti-Israel movement and, increasingly, by a worldview that slanders Jews in the name of progress.

Indeed, to many progressives, the comparison between blacks and Jews might sound obscene, even heretical. Modern progressive thought orbits around the theory of intersectionality, which interprets society through the prism of the politics of "privilege" and structural oppression. In its hierarchy of victimhood, Jews are classified as innately privileged, and blacks as inherently oppressed: any analogies are offensive and by definition absurd.

“Black Lives Matter” began life as a hashtag against police violence; “Am Yisrael Chai”, as a Talmudic dictum that the patriarch Jacob (Yisrael) never died, because he lives on through his children, Bnei Yisrael. The former spread as the name of an activist movement against anti-black violence; the latter, as a Jewish mantra passed through the generations for thousands of years, and more recently as a song by Rabbi Shlomo Carlebach and the anthem of the struggle to liberate Soviet Jewry. How could the two possibly be mirror images?

The Obvious Truth, Despite Deniers

Firstly, the fact that black lives matter is obviously true – but there remain deniers who continue to abuse black lives. The dissonance created between the very obviousness of the statement and the fact that it is not universally held to be self-evident is jarring. It forces outsiders to confront their own naive assumption, cultivated from a place of privilege – from lives blissfully untouched by anti-black racism – that everybody accepts the dignity of black lives. Indeed, the fact that many feel compelled to reaffirm this statement in the first place should unnerve us.

It’s obvious that the Jews live, but there remain many who oppose the existence of the Jewish people.

Likewise, it is obvious that the Jews live, especially when Jews say so themselves. But there remain many who oppose the existence of the Jewish people. From Islamists to neo-Nazis, the desire to annihilate the Jews is alive and well. The scope of this prejudice is magnified when one considers left-wing anti-Zionism, with its desire to strip Jews of the most historically effective mechanism for defending their existence – sovereignty. If one opens a German dictionary under “existenzrecht” (right to exist), “Israel’s right to exist” is the top example. The Jewish people lives, but our continued survival cannot be taken for granted. The fact we feel the need to remark upon it, and sing it on a loop with such joy, should remind Gentiles of its precarious foundations.

Secondly, the slogan “Black Lives Matter” is a means of forcing society to take that truth to its logical conclusions. If black lives matter, public policy must change until black lives are no longer undervalued, for example, as measured in casualties of police violence or incarceration rates. It is inadequate to espouse a general belief in equality: structural injustices need to be addressed in real, practical terms.

With “Am Yisrael Chai”, we can also compel Gentiles to recognize the real-world implications of Jewish survival. If one identifies with the slogan that the Jewish people live, one must logically support the non-negotiable security of the Jewish state – where nearly half of the world’s Jews actually live. It means fighting against demands to sabotage or dissolve the Jewish state, which would restore Jews to their traditional role of a vulnerable minority exposed to hostile societies. Not as a favor, but as a matter of justice.

Thirdly, although “Black Lives Matter” is derived from the broader truth that all lives matter, the political hijacking of the general proposition highlights the need for the particularist version. Progressives have been outraged by the saying “All Lives Matter”, not because some lives don’t matter, but because with the exception of horrifying cases like the recent Dallas shooting of police officers, there is no serious, structural challenge to the value of white lives. Collapsing this with a demand for black dignity, which a practical and not theoretical worry, downplays the systematic oppression of black people throughout history.

Jews would be outraged to hear a German politician, say, “The People of Israel live, the People of Germany live – all peoples live!”

Similarly, Jews would be outraged to hear a German politician, in Governor O’Malley-style, nonchalantly say, “Ja, ja. The People of Israel live, the People of Germany live – all peoples live!” Of course the German people lives – it has never suffered genocide. Through “Am Yisrael Chai”, we reaffirm that the historical remarkability of Jewish survival cannot be appreciated if subsumed into a statement that other safe groups are also alive. The Jewish national liberation movement alone – Zionism – comes under incessant, vitriolic assault.

Fourthly, “Black Lives Matter” constitutes an explicit demand that race not be taken out of the conversation in the name of inclusiveness and equality. Color-blind policy appears superficially egalitarian, but glosses over the unique injustices plaguing African Americans.

Likewise, one cannot tackle racism without acknowledging that nearly 60 per cent of victims of religious-based crimes in the US are Jews. Moreover, antisemitism is no mere spinoff of racism, but a distinct problem with a unique pathology. It was absurd of President Obama’s to characterize the Jewish victims of the Paris Hypercacher attack as a “bunch of folks randomly shot in a deli”: the victims’ identity was plainly relevant to the political violence. With “Am Yisrael Chai”, we insist that threats to the Jewish people’s existence be understood in context, with roots deep in the Western mindset, to be addressed.

“We understand,” declare the founders Black Lives Matter, “that when Black people in this country get free, the benefits will be wide reaching and transformative for society as a whole.” This sentiment runs through the core of the Jewish national renaissance: gentile philosopher and ally Jean-Jacques Rousseau argued that only when the Jews have their own state, can the world hear what they have to say. For Abba Eban, Israel’s first ambassador to the UN, Zionism would liberate “the Hebrew mind” from “the great handicap and reproach of homelessness”, once more enabling Jewish civilization to contribute to mankind as it did in ancient times. 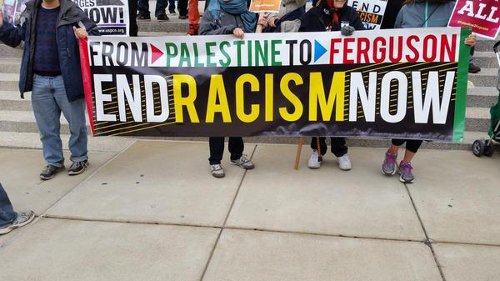 In recent years, the anti-Israel movement has made inroads in progressive circles. It has enlisted black and LGBT movements to the worldview that the Jews and Israel are oppressive forces. #BlackLivesMatter movement has openly adopted the slogan “From Palestine to Ferguson”.

When so-called progressives reject Jewish aspirations outright, and by adopting the Palestinian narrative wholesale treat Jewish self-determination as the enemy, they render themselves accomplices to the most destructive malice in history.

If progressive Jews fail to challenge these associations, they risk abandoning the intellectual climate to those indifferent to their survival qua Jews. Supporting the rights of the oppressed requires honesty about the real intersections between black liberation and Zionism, even if considered taboo. And once we internalize those vulnerabilities, we can start to forge open that multiracial alliance once more, and strip it back from the enemies of freedom and real social progress.

A Note from the Author

In the opening sentence, I warned that my article was likely to make many people uncomfortable: many self-styled progressives and Zionists, I wagered, would be unnerved to be told of similarities with the other. Nevertheless, I was and remain convinced that my analysis would benefit an open-minded Jewish audience. As somebody who is not black, I have always been confused by the statement "Black Lives Matter"; I hoped that exploring analogies to my people's own statement of defiance would enable me, and readers, to make sense of it. Moreover, I hoped that having unpacked the similarities between African-American and Jewish political platforms, we could develop a toolkit to challenge the co-option of the progressive cause into the anti-Israel struggle, finding creative ways to make allies out of adversaries.

Unfortunately, many of the responses have completely missed the point, as well as being of a nastily ad hominem character. In my article, I compare "Am Yisrael Chai" to the "Black Lives Matter" slogan. I do not draw analogies to the Black Lives Matter movement. For many, this nuanced distinction might appear specious. Indeed, it is difficult to unpack what the slogan might mean from the actions of the movement bearing that name. But in the interest of intellectual honesty, we cannot surrender to that difficulty. We can still try to understand what Black Lives Matter activists are trying to communicate with their slogan, without endorsing the actions done in the name of that sentiment.

If we refuse to make this effort, we risk willingly failing to understand what one of the most vocal activist groups in America wants. That ignorance hurts us, foremost. We also risk surrendering the entirety of progressive public opinion to those who make comparisons between "Black Lives Matter"--slogan and movement-- and the Palestinian struggle. And that distortion will hurt us even more.

Who Wants To Be An Anti-Semite?
Were Adam and Eve Jewish?
How I Learned to Love the Multiverse
10 Big Jewish Inventions
Comments