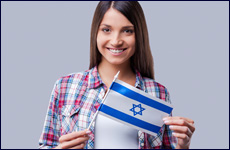 I was 13 and completely turned off from Judaism. Now, at 23, I couldn't feel more proud to be Jewish.

I was born into a Jewish family, but neither of my parents had a religious upbringing. We belonged to a reform synagogue and went to services for the High Holidays and the occasional Shabbat. I went to Hebrew school a couple times a week, but I was the kind of kid with a very short attention span that was always running around and talking to people, so even though I attended Hebrew school for about nine years, nothing really resonated with me. I didn't identify with Judaism at all.

Bat Mitzvah time was the absolute worst. I had no idea why I was doing what I was doing. Of course I knew that I had to read from the Torah and that I had to say certain prayers, but no one ever taught me why. I just thought it was a tradition, like setting off fireworks on July 4th or La Tomatina, a huge tomato fight that happens each year in Bunol, Spain (it’s a thing- look it up). And my dress was absolutely awful. It was a grayish blue and made me look like a tree stump. (At least that’s how I felt when I wore it.) Blech.

The reception was fantastic – great food, great music, great presents. And that was the end of my Jewish education. I was 13 and completely turned off from Judaism.

Throughout middle and high school, I was completely detached. I did small things with my synagogue here and there, but nothing really influenced me to become closer to Judaism. I was even more unaffiliated during my freshman year of college. I went to an HBCU (Historically Black College and University), and out of the thousands of students, I was the only Jew. It wasn’t until I transferred to a school in Philadelphia that I became more involved.

On the first Friday at my new school, I went to a Shabbat service at the Hillel. I didn’t especially enjoy it, but I ended up signing up for the newsletter anyway. Many weeks later, the Birthright application had opened up. My brother had gone on Birthright and liked it, plus my mom encouraged me to sign up. I thought what the heck, it’s a free trip, and ended up going. I had a great time! Our tour guide was amazing and we got to travel around the country.

My Birthright trip definitely sparked my interest in Judaism. I saw Judaism through a more mature perspective. I signed up for a 10-week Maimonides course at my Hillel when I got back from the trip. I learned more from the lectures and discussions in that class than I had learned at Hebrew school, plus I got to know the Rabbi well and spent time with him and his family.

I got a voucher from completing Maimonides and I was able to put it towards another trip to Israel. So I returned the next summer, this time with a group called RAJE (Russian American Jewish Experience). That trip completely changed my life. I remember getting that super emotional feeling that can’t be described with words as soon as we landed in Israel. I felt like Israel is my homeland, that I belong there and I felt such a close connection to Judaism. RAJE is like Birthright on steroids. The age range is wider so the people who go tend to be more mature. The trip is also three and a half weeks long and I think it’s the perfect mix of education and exploration.

Returning to the States was like coming down from a spiritual high, but I took what I learned with me and ended up taking another Maimonides course at the Hillel. From that class, I got a free flight voucher to and from Israel (Judaism just has a way of making you come back).

So here I am now, in the land of the falafel and the home of the brisket. God I love this place. I’ve been here for about two months and the first program I did, Jewel, was certainly eye opening. It was a three-week learning program for about 30 women.

I think I’ve become an all-around better, more mature person since becoming more observant. There are many things that I’ve learned over the past couple months that I’ve applied to my life and now practice on a daily basis. One thing Jewel taught me is that Judaism isn’t just something you can do overnight. It’s a slow process, two steps forward and one step back. You apply one thing to your life, try it out for a week, then at the end of the week assess it. How it made you feel, how it changed you, etc. If you’re comfortable with that step, then go ahead and add on something else. Then try that for a week, so on and so forth. And backtracking is natural too. Being comfortable with the process is the most important thing. It’s supposed to be slow and steady, and there is always more to learn.

I’ve felt so many emotions being in Israel that I never would’ve experienced in the States. It’s an extremely comfortable feeling knowing that the majority of people around you are part of one big family. I know it sounds super cliché, but hear me out. We Jews share so many things: a religion, culture, a language, even a country! Not to mention the falafel, shakshuka, shwarma and five-shekel coffee stores way better than Starbucks… Judaism is truly unique and I feel blessed to be a part of it.

Three Things I Learned While My Plane Crashed

Lessons from the Coast of Nowhere
It Takes A Lot Of Faith To Be An Atheist
How Instagram Brought Back This Nostalgic Soup
What Makes Eli Run?
Comments
MOST POPULAR IN Spirituality
Our privacy policy