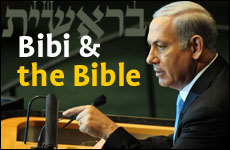 When leaders make speeches, people listen not only to the specific policies and positions but also to the vocabulary of ideas, which impacts public discourse and has the power to create a new way of thinking. An analysis of Prime Minister Binyamin Netanyahu’s speeches reveals an important philosophy of the meaning and mission of Israel and of Jewish destiny.

The prime minister often invokes Judaism and the millennia sweep of Jewish history rooted in the Bible as the context for the ideas and policies he presents to the world.

His most recent speech to the United Nations General Assembly on September 27 is a classic example of this:

“Three thousand years ago, King David reigned over the Jewish state in our eternal capital, Jerusalem. I say that to all those that proclaim that the Jewish state has no roots in our region and it will soon disappear – We say in Hebrew, ‘Am Yisrael Chai,’ and the Jewish state will live forever.”

In his speeches, Netanyahu integrates Jewish history and destiny with Torah values, as he did on that occasion before the nations of the world: “Yesterday was Yom Kippur, the holiest day of the Jewish year. Every year for over three millennia we have come together on this day of reflection and atonement. We take stock of our past. We pray for our future.

Modern Israel, as the third great Jewish commonwealth in 3,300, is presented here as the spiritual heir of its illustrious predecessors, sharing the values and moral vision of generations of Jews throughout the ages.

“In my office in Jerusalem there’s an ancient seal. It’s a signet ring of a Jewish official from the time of the Bible. This seal was found right next to the Western Wall, and it dates back 2,700, to the time of King Hezekiah. Now, there’s a name of the Jewish official inscribed on the ring in Hebrew. His name was Netanyahu.

“That’s my last name. My first name, Benjamin, dates back a thousand years earlier to Benjamin – Benyamin, the son of Jacob, who was also known as Israel. Jacob and his 12 sons roamed these same hills of Judea and Samaria 4,000 years ago, and there’s been a continuous Jewish presence in the land ever since.”

These biblical references made by the prime minister are very significant. Providing the full historic and value-based context is crucial to understanding Israel and the Jewish people today. It is of vital moral and strategic importance that Zionism and the modern State of Israel be recognized not to have originated just over 100 years ago in Basel, Switzerland, but, in fact, as being rooted in almost 4,000 years of Jewish history, beginning with G-d’s promise to Abraham, Isaac and Jacob.

This is important from a moral point of view because it establishes our right and connection to the Land of Israel.

If Zionism is perceived to be a modern phenomenon, then the accusation that Israel is a colonialist power is indeed tenable. On the other hand, if it is understood that the Land of Israel has been the Jewish people’s biblical and historic homeland of thousands of years, then the dialogue in the global arena is dramatically transformed; as the prime minister said in his 2011 speech to the United States Congress:

“We’re not the British in India. We’re not the Belgians in Congo. This is the land of our forefathers, the Land of Israel, to which Abraham brought the idea of one God, where David set out to confront Goliath, and where Isaiah saw his vision of eternal peace. No distortion of history could deny the 4,000-year-old bond between the Jewish people and the Jewish land.”

Such assertions do not preclude the possibility of territorial compromises to establish a Palestinian state on the biblical land of Judea and Samaria, also known as the West Bank, as the prime minister said in the very next paragraph of the same speech:

“But there is another truth. The Palestinians share this small land with us. We seek a peace in which they’ll be neither Israel’s subjects nor its citizens. They should enjoy a national life of dignity as a free, viable and independent people living in their own state – They should enjoy a prosperous economy, where their creativity and initiative can flourish.”

But even with territorial compromise, the historical context is crucial. If Israel concedes that the land of the West Bank – Judea and Samaria – is not Jewish land but illegally occupied Palestinian land, the framework of the international debate shifts. Israel can demand that its security needs be taken into account, but the world will counter that ending the illegal occupation is the overriding priority.

These roots  give Israel the sense of pride, destiny and divine mission to go forward with confidence.

On the other hand, by asserting that all of Israel, including the West Bank, has for thousands of years been Jewish land, the State of Israel stands before the world with moral authority and from a position of strength, ready to negotiate and even give away land for the establishment of a Palestinian state, but doing so with the integrity of being the rightful owners of the land and not colonial robbers.

In his concluding words at the UN this year Prime Minister Netanyahu said:

“The traditions of the Jewish people go back thousands of years. They are the source of our collective values and the foundation of our national strength. Throughout history, we have been at the forefront of efforts to expand liberty, promote equality and advance human rights. We champion these principles not despite of our traditions but because of them. We heed the words of the Jewish prophets Isaiah, Amos and Jeremiah to treat all with dignity and compassion, to pursue justice and cherish life and to pray and strive for peace. These are the timeless values of my people and these are the Jewish peoples’ greatest gift to mankind. Let us commit ourselves today to defend these values so that we can defend our freedom and protect our common civilization.”

By framing Israel’s vision from a moral perspective the prime minister creates the opportunity of establishing an alliance of values bringing together most nations of the world. The struggle that is taking place between radical Islam on the one hand, and Israel on the other, is a struggle of values, and a powerful international alliance that can be galvanized around the values of human dignity, freedom and the sanctity of human life.

Furthermore, this approach of a broad moral vision is not only about convincing the outside world – it is also about creating an inspiring calling for Jews, in terms of which Israel is a meaningful and sacred part of almost 4,000 years of Jewish history and destiny, and a crucial part of the fulfillment of our divine and eternal values. If the modern State of Israel is cut off from its roots in Jewish history, Torah values and divine destiny, it cannot, in the long-term, survive the military and political forces which seek its destruction.