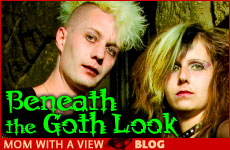 There’s a real person inside whose book is deeper and much more substantial than his cover.

“Don’t judge a book by its cover.” How many times did your mother tell you that? The irony is that in the world of book publishing, that’s exactly what happens! But of course that’s not the point of your mother’s lesson. We tend to judge and label people based on superficial appearances. And sometimes we can be very wrong indeed.

A recent case in point. The other night my daughter and I went to see a musical performance. We had seats one and two. “You take two,” my daughter whispered to me when she saw the inhabitants of seats three and four. Beside us sat a young man, dressed in the Goth look with straight black hair shooting out in all directions and black leather everything dotted with metal studs. His female companion had hair that was definitely not her (or anyone’s) natural color and similar attire. I sat in seat two, my body carefully angled towards seat one.

We had a little time before the show and my neighbor got up to visit the snack bar. I exhaled a little and spread out in the seat – until he returned, popcorn in hand. I scrunched lower in my seat.

He seemed oblivious to my initial aversion and graciously offered me some of his popcorn. “It’s really good – cheese-flavored.” In that moment, the world turned.

Embarrassed and humiliated for being so judgmental, I politely refused and we fell into a wide-ranging conversation about Broadway shows, stars and performances. I was able to see the person beneath the mask (a particular irony since we were there to see The Phantom of the Opera) and to remind myself that my mother had some wisdom after all.

There are certain lessons that we seem to have to continue re-learning. I hope this is no longer one of them.

And yet, I think there is an onus on the other side as well. Our clothing does reflect who we are. It does say something about the community we identify with. It says something about how we want the world to see us. Dressing “Goth” is making a statement – I confess that I’m not sure what it is. Dressing provocatively also says something about our goals and priorities. (How many times can I tell young women that if they don’t want to be treated like an object they shouldn’t dress like one?). And dressing in a modest and dignified manner says something else entirely.

So the responsibility is two-fold. We should dress in a way that accurately represents our values and is consistent with who we would like to be and the message we would like to give others.

And, on the other hand, we need to look beyond the surface when meeting others to try to find the human being underneath, to connect with the essence of the Divine that resides within each of us.

Punk, Goth, hip, cool, whatever the fashion, remember there’s a real person inside whose book is deeper and much more substantial than his cover.

Fiddler on the Roof