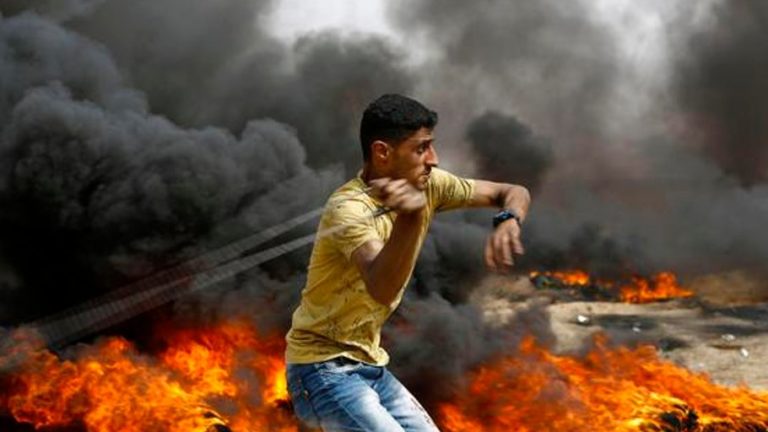 In Orwellian fashion, truth is being turned on its head.

Try as I might, there are some things I just don’t get.

One of them is the failure by many – in political circles, the media, and even segments of the Jewish community – to understand Israel’s unenviable security situation on its border with Gaza.

It can’t be said often enough. Israel left Gaza in 2005, giving it the first chance in its history to govern itself, something no one else – including Egypt, which occupied the coastal strip until 1967 – ever did.

In fact, Israel went even further. As a sign of good will, Israel kept its greenhouses intact, hoping that would help kickstart Gaza’s economy.

Within days, the greenhouses were all gone, ransacked by local residents who stripped them bare.

And within two years, Hamas was in control, booting out the Palestinian Authority – or, in some cases, simply throwing their members from the roofs of buildings – and establishing a sharia-based, jihadist enclave.

By now, the answer should be well known.

Clearly it’s not, at least to judge from the way some are reacting to current events.

For them, Hamas is nothing more than a symbol of the “resistance,” the “oppressed,” the “occupied,” and the “powerless.”

After all, they add, look at the body count. How could justice possibly be on the side of those who suffer fewer casualties? How dare the Israelis have the audacity to defend themselves in such an “unfair” way?

Thus, the people we’re talking about, wrapping themselves in a head-to-toe mantle of virtue and empathy for the “weak,” are quick to criticize Israel mercilessly.

Well, it may be convenient, but, in Orwellian fashion, it turns truth on its head.

For starters, Hamas isn’t exactly a “peace and love” enterprise. Don’t take my word for it. It’s enough to read the statements of Hamas leaders and glance at the group’s charter.

The words are clear and chilling. There’s no ambiguity, no opaqueness, about them.

Hamas seeks the annihilation of Israel, pure and simple. It couldn’t care less which political party governs Israel. The problem for Hamas is not Israeli policy but the Israeli polity.

Hamas is an extension of the Muslim Brotherhood. It aspires to a caliphate ruled by its interpretation of Islamic law. Its mortal enemies are Egypt, with which Gaza also shares a border, though you wouldn’t begin to know it from much of the discussion, and other Sunni Arab countries that stand in its way.

Hamas is no friend of women’s equality, LGBT rights, religious pluralism, the rule of law, and dissent, and that creates a certain unmistakable irony when looking at many of those cheering them on today in the West.

Hamas is a terrorist organization, designated officially as such by both the United States and the European Union.

Hamas has squandered Gaza’s future by diverting international aid to the aim of destroying Israel.

Hamas has no hesitation to send women and children to the border with Israel, and hope to create bloody incidents that the media will broadcast to the world.

Rather than build schools, sewers, water treatment plants, and housing, precious funds are targeted towards arms factories and the construction of one tunnel after another that can reach Israel with the aim of killing, maiming, and kidnapping.

And Hamas has no hesitation to instrumentalize women and children, send them to the border with Israel, and hope to create bloody incidents that the media will broadcast to the world. Sure enough, the media too often has done just that – offering no background, no context, only images of the “powerful” confronting the “powerless.”

Pray tell, what is Israel supposed to do in the face of a terrorist group that is trying to send waves of people through the fences and stir them up to kill any Israeli they meet?

How is Israel supposed to react when that group celebrates death, while knowing it will strike a sympathetic chord in certain Western corridors?

What would any country to do in Israel’s shoes? Sure, it’s easy enough to issue sanctimonious statements from afar, call for calm, urge restraint, and vote on one-sided UN resolutions which blindly condemn Israel. That’s cost-free.

But if they faced the likes of Hamas on their own borders, does anyone doubt they would rush to Israel to get first-hand knowledge about how to deal with the situation, how to minimize casualties while standing strong, and how to ensure the resilience of the local population most directly affected?

I have no doubt because that’s exactly what European and other countries have been doing in recent years. As they face a growing jihadist threat, they turn to Israel for advice and training, the very same Israel they are so often quick to assail when it copes with similar dangers.

In our world, we hear endless mantras about the need “to learn the lessons of history” and “not to repeat the mistakes of the past.” In the end, though, are they simply empty words devoid of any real meaning?

When I watch in dismay how some are responding to the current situation, including certain U.S. legislators, Hollywood personalities, media commentators, and European leaders, I can’t help but think of the stunning myopia of Walter Lippmann, the legendary American journalist.

In 1933, several months after Adolf Hitler took power, here’s what he wrote in the New York Herald Tribune:

“To deny today that Germany can speak as a civilized power, because uncivilized things are being said and done in Germany, is in itself a deep form of intolerance. Like all intolerance it betrays a lack of moral wisdom, in this case the moral wisdom of religious insight into the dual nature of man.... So the outer world will do well to accept the evidence of German good will and seek by all possible means to meet it and justify it.”

Lippmann was a Jew. His fundamental misreading of the “nature of man” in totalitarian Germany was not unique, but it proved costly.

If we are to learn the lessons of history these days, understanding the nature of Hamas might be a good place to begin.

This article originally appeared in the Times of Israel

The Jewish Ethicist - Should I Blow the Whistle6 min read

These Lights We Kindle4 min read