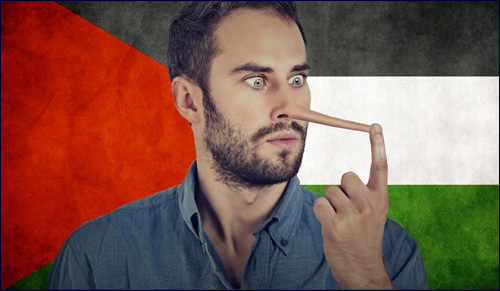 Palestinian leaders are twisting reality to rally the world against Israel and to advance their own political goals.

It is a puzzle: are the leaders of the Palestinian Authority (PA) playing dumb, or do they believe their own ridiculous rhetoric?

As the current wave of stabbings, car-rammings and shooting attacks, which began in October 2015, continues and even seems to be intensifying, PA President Mahmoud Abbas and top Palestinian officials insist that we are witnessing nothing but a "popular peaceful uprising."

Abbas said precisely this to a group of Arab Israeli journalists he invited to his office last week. Abbas voiced his full backing for the "popular and peaceful uprising." He further explained that Palestinians were using "all peaceful means" to "resist Israeli occupation."

For Abbas and the Palestinian leadership, the death of more than 170 Palestinians and 26 Israelis in the past five months occurred in the context of a "popular and peaceful uprising." One can only imagine what the uprising would have looked like had it not been "peaceful."

Interestingly, Abbas seems to consider knives and automatic weapons "peaceful" tools that Palestinians are entitled to use to "resist occupation."

The current Palestinian leadership is incapable of placing any blame whatsoever on the Palestinians, particularly those who have wounded and killed Israelis.

Rather than seeking to calm the situation, Abbas and company add fuel to the fire by glorifying the Palestinian assailants – many of whom are under the age of 20 – and encouraging others to join the "peaceful uprising" against Israel.

Let us get things straight. The current Palestinian leadership is incapable of placing any blame whatsoever on the Palestinians, particularly those who have wounded and killed Israelis. In their view, all fault lies with Israel alone, and the international community is duty-bound to step in and stop Israeli "crimes" against Palestinians.

Palestinian leaders have a long history of shirking responsibility for the travails of their people. In doing so, they have brought disaster to generation after generation of Palestinians.

Of course, victimhood is a broad category. The Palestinian youths who are goaded by the Palestinian Authority to murder Jews are also victims. They are victims of failed leaders who push them to their death by lying to them about Israeli and Jewish "conspiracies" against Arabs and Muslims and the Al-Aqsa Mosque.

Not a single senior Palestinian official has condemned the targeting of innocent civilians in this "peaceful" uprising, even when the victim is a 38-year-old mother and nurse. They are too busy glorifying the assailants and naming streets and squares after them.

Palestinian leaders are not denouncing such cases of murder for two reasons.

Not a single senior Palestinian official has condemned the targeting of innocent civilians in this "peaceful" uprising.

The leaders themselves are responsible for the massive campaign of anti-Israel incitement that preceded the current wave of attacks. This campaign intensified in the past two years as Abbas and top Palestinian officials began telling Palestinians that Jews were "defiling the Aqsa Mosque with their filthy feet." Several days before the attacks began, Abbas assured his people that those who die defending their holy sites would go straight to heaven. "Every drop of blood spilled in Jerusalem is pure blood," he stressed.

Abbas and his henchmen have succeeded: Palestinian minors are going out and "stopping" Jews from desecrating the Al-Aqsa Mosque and thwarting their "scheme" to destroy Islamic holy sites. So the PA and its president have upped the ante, claiming that now Israel is supposedly carrying out "extrajudicial executions" by shooting Palestinians who are in the process of trying to commit murder with knives and automatic rifles – the very Palestinians brainwashed by Palestinian leaders and media outlets.

And so, we come to two unpleasant truths: (1) PA leaders would be hard-pressed to denounce acts of terrorism against Israel when they incited that very violence; and (2) the current wave of anti-Israel attacks provides Abbas and other Palestinian leaders with ammunition to delegitimize Israel and dehumanize Jews in the international arena.

Palestinian leaders are twisting reality to rally the world against Israel and to advance their own political goals. Since the beginning of this round of attacks, Abbas and several senior officials in Ramallah have called for international intervention to stop Israeli "aggression" against the Palestinians. In their view, the shooting of a knife-wielding minor is an act of "aggression" and a "war crime" which requires immediate international intervention.

The Palestinian leadership is now seeking to leverage the violence to call for an international peace conference, toward receiving international "protection" for the Palestinians. Abbas hopes that such a conference would yield an overall solution imposed upon Israel. The Palestinian Authority president is convinced that world pressure on Israel will get him more than a negotiated settlement. That is why he does not want to return to the negotiating table with Israel.

Thus, there is a method here: For five full months, the official Palestinian stance has been that Israel initiated this violence and that Israelis are "deliberately targeting Palestinian children." The Palestinian Authority leadership argues that only the UN can save those children, by sending troops to the Palestinian territories.

The attackers are in fact targeting Jews because they have been incited and brainwashed by the same leaders who are now denouncing Israel for protecting itself.

Thanks to the poison with which the Palestinian Authority has indoctrinated its people, Palestinians are now unable to condemn the murder of any Jew or even call among themselves to keep their teenagers from becoming deadly attackers. The Palestinian leaders have made it impossible even to talk about peace with Israel. Such is their journey to a healthy and prosperous society and state.

According to the Palestinian Authority, these youths are acting out of despair – with settlements, checkpoints and lack of progress in the peace process. Leaving the dream-world of Abbasland, however, we are privy to a different reality. The attackers are in fact targeting Jews because they have been incited and brainwashed by the same leaders who are now denouncing Israel for protecting itself. It is precisely Palestinian and other Arab television stations, imams and other leaders spurring the youth to take on their deadly missions.

Despite the old saying that you can fool some of the people some of the time but not all of the people all of the time, Abbas and company are doing pretty well fooling many people much of the time. Once again, Palestinians have fallen victim to the lies of their leaders, who encourage them to seek martyrdom and engage in acts of violence instead of building good lives for themselves and their communities. The blood of the Palestinians who are being shot and killed while attacking Jews is on the hands of Abbas and his senior officials. They can be found in Ramallah, thinking up ways to fool more of the people more of the time.

This article originally appeared on http://www.gatestoneinstitute.org/

Khaled Abu Toameh, an Arab Muslim, is a veteran award-winning journalist who has been covering Palestinian affairs for nearly three decades. He studied at Hebrew University and began his career as a reporter by working for a PLO-affiliated newspaper in Jerusalem. Abu Toameh currently works for the international media, serving as the 'eyes and ears' of foreign journalists in the West Bank and Gaza Strip. Abu Toameh's articles have appeared in numerous newspapers around the world, including The Wall Street Journal, US News & World Report and The Sunday Times of London. Since 2002 he has been writing on Palestinian affairs for The Jerusalem Post. Abu Toameh has also been working as a producer and consultant for NBC News since 1989. He is a Distinguished Senior Fellow at the Gatestone Institute.

Israel: A Model for Democracy

Reunifying Jerusalem: Remembering Ammunition Hill
Should I Break Up, Get Engaged or Keep Dating?
Time Is Your Precious Commodity
A Constant World in Flux
Comments
MOST POPULAR IN Israel
Our privacy policy