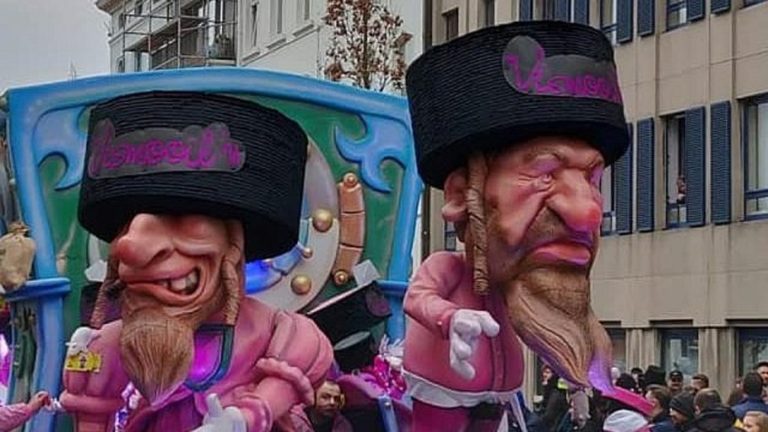 The Belgian city of Aalst is only a short drive from the gleaming modern towers that house the European Union in central Brussels. But on Sunday, the picturesque town seemed to belong to a previous era, as a grotesque anti-Semitic parade float promenaded through the center of town, looking like something out of the Middle Ages or Nazi times.

The float depicted two huge, snarling Orthodox Jews with huge hook noses and beards, wearing shtreimels (the fur hats worn by some Hassidic Jews), standing amid gold coins and bags of money, One of the Jews has a rat on his shoulder. In the back is a synagogue with a mezuzah on the doorway. The title of the float was “Sabbath Year.”

A small group of locals was behind the float. The group calls themselves Vismooil’n and is made up of seemingly ordinary Belgians, including one former worker in the Department of Education. Each year, they create an elaborate carnival float. This year, they explained to journalists, they were worried about money, so they decided to express their economic anxiety by turning to age-old anti-Jewish stereotypes of Jews and money.

This isn’t the first time that Aalst’s annual carnival has featured extreme anti-Jewish floats. In 2013, a different community group designed an elaborate float featuring people dressed as Nazis and Hassidic Jews, standing on a train car like the type that brought Jews to their deaths during World War II. A poster on the float showed local politicians dressed up as Nazis holding canisters of Zyklon B, the poison used to murder Jews in gas chambers.

The day after the parade, condemnations poured in. Rabbi Binyomin Jacobs, the Chief Rabbi of the Netherlands, criticized the float for containing “anti-Semitic caricatures from 1939.” The main Jewish communal groups in Belgium complained to the federal anti-racism office: “In a democracy like Belgium, there is no room for such things, carnival or not.” The organizers of the parade apologized for the float.

Yet the fact remains that scores of people could look at these floats - workers could spend hours creating them, they could go home and describe them to their families, parade committees could review and approve the floats - and no one ever seemed to recognize that their expressions of venal hatred towards Jews was a problem.

When I read about the parade in Aalst, I was sitting next to my young son. “What is that?” he asked, leaning into my computer for a closer look. My heart sank; I shut my computer and suggested we play a game instead.

“Were they Jews?” my son asked a little while later.

I tried to explain that the grotesque caricatures were what some people thought Jews look like. My stomach tightened in a knot. My son is named after his great-grandmother, who fled Nazi Europe in the 1930s. She used to tell me about the raw hatred she’d experienced growing up in Vienna. It used to seem so far away. I couldn’t imagine experiencing such intense hatred. Yet in the past few years, these hostile attitudes towards Jews have resurfaced.

Belgium is a case in point. In 2014, Belgian authorities ruled that a Turkish-run cafe in the city of Liege had to remove a sign saying that dogs were allowed in the restaurant but Jews were not. That same year a Belgian doctor in Antwerp refused to treat an elderly Jewish woman for a fractured rib; he advised her to “go to Gaza” instead. A 2018 poll found that well over half of Belgian Jews report having been harassed for being Jewish.

Anti-Jewish feeling is rising across Europe and beyond. Britain, the United States and Canada have all seen record levels of anti-Jewish attacks in recent years. On a recent visit to London, a woman on the underground train stared at my son’s kippah and then said to her husband in a loud stage whisper, “That’s why I support Corbyn”, referring to the leader of Britain’s Labour party who has been widely accused of being anti-Semitic and allowing anti-Semitism to flourish in his party.

The outrageous float in Aalst isn't a wakeup call; it’s more like an alarm we’re hearing after hitting the snooze button a hundred times. In too many quarters, it’s become acceptable to make fun of Jews or to express blatant anti-Semitism. We’re far from the hell in which my grandmother found herself, but all these years later, one insight she used to share seems crucial.

When my grandmother was a child, Jews were so demonized that even Jews themselves had internalized their hatred. She recalls being ashamed of being a Jew and feeling that it was natural that others would think less of her if they knew she was Jewish. We Jews cannot be cowed; we must not be ashamed. When we see outrageous example of Jew-hatred, it’s our duty to protest and demand a change, and stand up for ourselves with pride and strength.