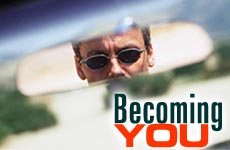 On Rosh Hashana, we pledge not to remain a cheap imitation of our 'old self.'

There is a deep secret contained in this. People reach the middle of their lives and think that meaningful change is impossible. Therefore, the Almighty put Rosh Hashana in the middle of the year to teach us that it's never too late to begin again.

In the most obvious sense, Rosh Hashana is all about making God our king, for whom we have awesome respect and commit to following His instructions.

But there's an even more primary step. The Kotzker Rebbe once observed that some people come to him in search of assistance to reach God. But their efforts are for naught, for "[God's] glory fills all the earth" (Isaiah 6:3). Rather, the Kotzker taught, for whom must people search? For themselves.

The Midrash (Kohelet Rabba 1:3) comments that "one who grows old is like an ape." The Kotzker Rebbe explains that the nature of an ape is to imitate. "Just as it is the way of an ape to imitate humans, so too, a person, when he has become old, imitates himself, and does what was his manner previously." In other words, most of us, at some point in life, either consciously or not, become satisfied with who we are and what we've become. As such, we cease to strive toward attaining greater spiritual heights. We are content to live out our remaining days as a mere imitation of ourselves!

From this we see that the Torah perspective on "growing old" is not a function of age, but rather on whether we remain committed to spiritual growth.

Therefore, the question we all must ask is: Have I become an imitation of myself? And if so, when did it happen and what factors are to blame? Is it malaise, a crisis in belief, anger at God, or simply laziness? Unless we find the root of the problem, how can we hope to uproot it?

But there's another, perhaps bigger, question: Who do I want to be? As Hillel says, "If not for me, then who?" (Avot 1:14) In other words, if I recognize the need to go beyond the "me," because I am no longer content with who I am now, then "who" exactly would I like to become?

Rosh Hashana is the most ideal time to contemplate this. Because on Rosh Hashana the DNA for the year is being formed, and God looks to us as partners in its creation.

Rabbi Akiva Tatz gives the following example: Imagine you're an architect sitting in front of a blueprint. Think about how much easier it is to change the position of the windows before you construct the building than it is after the house has been built!

Rosh Hashana is the time when we make the blueprint for our new selves. The power to envision what we want to become is exponentially greater now, than it is once the year has already been built.

Using this as a framework, let's go deeper. Every situation, or "scene" we find ourselves in life -- whether as seemingly trivial as standing on line in the supermarket, or deciding whether or not to lose our temper -- is a ly designed opportunity for us to grow spiritually, to become more "God-like." On some level, we are like actors and God is the Ultimate Playwright.

Now imagine the author is about write the next act, but before he does so he gives you the opportunity to discuss who you'd like to be, and what role you'd like to play in the new production. This is what the prayers of Rosh Hashanah are all about. The Almighty is about to create the new year, but before He does, in the ultimate sign of love and respect, He looks to us for input.

Take the time to dream the greatest dream of yourself, and then chart the course to realizing it. Ask yourself: Am I constantly striving to be a better parent/spouse? Am I making an effort to learn Hebrew and observe Shabbos? Do I empathize with the plight of Jews around the world, and the devastating terror in Israel? Do I have a fixed time for Torah study every day?

Now structure a timetable for achieving your goals. For some reason, we never think in terms of deadlines when it comes to spirituality. But why not? As Hillel concludes, "If not now, when?" "Now" that I have envisioned the new me, "when" will I bring it into being?

Great days are coming. Let's use them to make a big breakthrough, for ourselves and our world.

David Sacks is an Emmy award winning writer producer. His weekly podcasts are available at Torahonitunes.com.

A Womb for the Soul

Keep Your Eye on the Expert
Caramelized Onion and Pumpkin Pirozhki
For Every Individual, A Torah Scroll
Allegiance To The Monarch
Comments
MOST POPULAR IN Growth & Renewal
Our privacy policy
Aish.com Is Looking for Great Writers