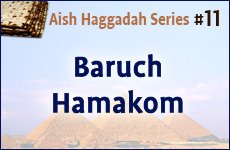 "Blessed is The One Who gave the Torah to His people Israel."

Free to do What?

The paragraph, "Blessed is the One Who gave the Torah," seems out of place. At this point, the obvious statement of the Haggadah would have been to thank God for taking us out of Egypt. Instead, despite all that the Exodus did for us, we nevertheless bless God because He gave us the Torah. Why?

The Torah is called Torat Chaim, which literally means "Instructions for Living." Just like your microwave oven came with an instruction manual, so too, Torah is our instruction manual for life itself. After all is said and done, if we do not have Torah, then we have nothing. A person may have been saved, cured of a terrible disease, survived the Holocaust and escaped prison in Siberia... but if we don't know what to do with our lives, then what does it all mean?

Four Views of 'the Place'

This short poem corresponds to the Four Sons.

In Hebrew, the first line of this poem is Baruch HaMakom, which literally means "Blessed is The Place." This is a very deep understanding of God. By referring to God as "The Place," we are saying that God is not in the world; rather, the world is in God.

If you say "God is in the world," then are you restricting Him to a finite location like the synagogue or a mountaintop or a beautiful concerto. But if you say "the world is in God," it really means that He sustains the entire world which is infused with His spirituality.

This is the Wise Son. He understands that God is always right there. It's all sitting on His shoulders (so to speak) and He infuses everything with sanctity.

The second son, the Evil Son, says, "Blessed is He." This son refers to God by a third-person pronoun. He is excluding himself, looking at Judaism from a cold distance.

The third son, the Simple Son, mentions God giving the Torah to the Jewish people. He feels the power of God in terms of Jewish history, the major events. It's like people who say, "When I go to the Western Wall, then I feel something." That's the third son.

Then the fourth son says, "Blessed is He." This son, who doesn't even know how to ask, uses the same phrase as the Evil Son, "Blessed be He." Judaism says "don't be apathetic" ― in a way that's like the Evil Son.

Before the Big Bang

There are those who will tell you that before the big bang got our universal rolling there was no time, space, matter, or energy. If this is true, as some physicists and cosmologists insist, then the obvious question is: what did exist before our universe?

To figure that out all you have to do is close your eyes and see what appears when you rid your mind's eye of time, space, matter and energy. Go ahead ― try it. Now, once you've made a few attempts, you will begin to realize that this visualization exercise is not only tough, it's impossible! Because if you could "see" what was there then obviously whatever you saw couldn't have been it. And even if all you saw was darkness, it had to be a darkness which filled a space, and remember ― there was no space!

Are you scratching your head, wondering where the universe came from if what preceded it was absolute nothingness? Well, don't worry, the Haggadah has an answer to this puzzle of the universal antecedent. The Haggadah calls it HaMakom -- the primordial "Place."

The main character in this little paragraph seems to be God, but why doesn't the Haggadah use the name of God? It alludes to God with terms like "He" or "The Place." Why not just say God?

God's name has been obscured so that something else would be featured ― "that gave the Torah to His people Israel." The word "gave" and the word "gift" come from the same root.

Consider this: what is the greatest gift you could give your children? Is it wealth, is it love, is it wisdom?

The Torah is not a history book. Neither is it law, ethics, or philosophy. The word Torah, in Hebrew, means "instruction," and that's exactly what it is. Instructions for love and friendship, marriage and parenting, personal freedom and spirituality, universal values and human understanding, self-awareness, Jewish awareness, and the achievement of potential.

If you could give your children the gift of sound wisdom and maturely cultivated counsel ― wouldn't you? Well, God has the wisdom and the Torah is His gift.

In fact, Jewish law states that when the entire Seder is over ― when all the food has been eaten, the wine has been drunk and the songs have been sung ― a person should still stay at the Seder table, elaborating on the Exodus story, until sleep overtakes him. On this night, the more the better!

Four Sons and the Child Within