Ban Ki-Moon Gets it Wrong Again 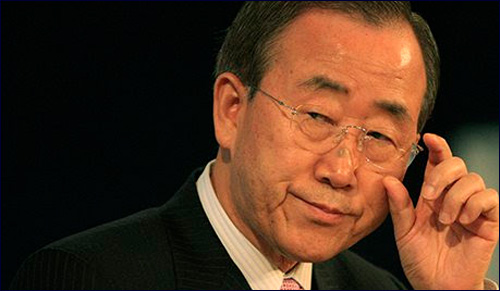 A response to his NYT's op-ed.

Ban Ki-Moon, the Secretary-General of the United Nations, found himself deluged with an unexpected and overwhelming negative press from countless sources upset by his seemingly cavalier sanction of barbaric acts of terrorism as understandable and excusable expressions of basic “human nature.” This week he wrote an op-ed in the New York Times to address the criticism and “explain himself.”

In an essay with the ominous title “Don’t Shoot The Messenger,” Ban Ki-Moon tries to paint himself as a misunderstood statesman and spokesman for peace whose message was simply misinterpreted. He would have us believe that Prime Minister Netanyahu as well as Israeli officials who were outraged by his remarks did him an injustice and shot the messenger instead of being grateful for the message.

On the positive side, the Secretary-General did something that we’ve been waiting for a very long time. He said he categorically condemns terrorism. We are profoundly gratified to learn that he agrees stabbings, vehicle rammings and other attacks by Palestinians targeting Israeli civilians are reprehensible. Some of the censure hit its mark.

But what remains perplexing is why any of this awareness has never until now gained any foothold in the votes and the deliberations of the organization he represents.

It is a certifiable fact that the UN’s Human Rights Council has issued more condemnations of Israel than of all other countries combined. The Council reserves a special agenda item targeting Israel in every meeting, singling out the country in a way not done for any other.

According to the civil rights group UN Watch, in the nine years since the UN’s Human Rights Council was first set up it has issued condemnations of Israel 61 times, far outstripping the 55 condemnations of other countries from across the world issued in the same period. In November 2015, the UN General Assembly adopted six non-binding resolutions, drafted by the Palestinians and Syria, singling out and criticizing Israel, and no resolutions on China, Cuba, Russia, Saudi Arabia, Venezuela, ISIS, or any other human rights situation.

If terrorism is indeed categorically condemned why isn’t any of this condemnation reflected in the halls of the United Nations? Why are the perpetrators of terrorism hailed as heroes and the victims invariably brought up for censure? Ban Ki-moon’s voice is the voice of Jacob but his hands, the actions of his organization, are clearly the hands of Esau, glorifying violence. And for that he certainly owes us an additional explanation.

But if Ban Ki-moon feels we’ve misjudged him, let’s see how well his “amended version” holds up to the light of truth and to the demand for fairness from the head of the organization ostensibly dedicated to bringing about a just resolution to the problems of the world.

At the outset, Ban Ki-Moon rephrases what he said to make it appear as if critics were tilting at imaginary windmills: He writes, “That polarization showed itself in the halls of the United Nations last week when I pointed out a simple truth: History proves that people will always resist occupation.”

No, that’s not what he originally said. And that’s not what incensed civilized listeners. He spoke of the specific resistance of Palestinians in these past months, the stabbings of innocent civilians, the murder of a mother in front of her children, the brutal slayings of people at prayer – and claimed this was understandable as nothing other than “human nature.” That was an abominable affront to human dignity. Jewish tradition, in the classic Mishnah of Ethics of the Fathers, cautions “wise men, be careful of your words.” The Secretary-General of the United Nations surely should’ve understood the implication of his words – and if he did not when he first uttered them he should apologize for them today.

It is not the occupation they opposed, but the Jews.

More, let’s analyze what he feels comfortable saying now, after already having been alerted to the ill will caused by the initial way he phrased his remarks. “History proves that people will always resist occupation.” And so at the very outset he offers an explanation for Palestinian violence which anyone with a sense of history or simple understanding of true Palestinian goals ought to recognize as blatant fiction. It is Palestinian leaders themselves who for years have made it clear that what they are opposed to fundamentally is not the occupation but the Jews, not the fact that Israelis control some of the land on which Arabs live, but that Israelis live on any of the land of Israel from which, once Arabs gain control, they will be totally excluded and ideally exterminated.

It is hard to believe that Ban Ki-moon doesn’t know that Palestinian refusal to make peace – even after having lost every war they started in repeated efforts to wipe out the Jewish state – has no relationship with the word occupation. Occupation is a word used after 1967 to camouflage the Arab goal of Israel’s destruction which long preceded the six-day war and any settlements.

It was Thomas Friedman, no stranger to criticism of Israel, who nonetheless in 2002 wrote the following in the New York Times: "The world must understand that the Palestinians have not chosen suicide bombing out of 'desperation' stemming from the Israeli occupation... To begin with, a lot of other people in the world are desperate, yet they have not gone around strapping dynamite to themselves. Let's be very clear: Palestinians have adopted suicide bombing as a strategic choice, not out of desperation. This threatens all civilization because if suicide bombing is allowed to work in Israel, then, like hijacking and airplane bombing, it will be copied and will eventually lead to a bomber strapped with a nuclear device threatening entire nations. That is why the whole world must see this Palestinian suicide strategy defeated.”

In the infamous Arab pogrom in Hebron in 1929 there was no occupation. In 1948, when seven Arab nations vowed to slay every Jew and conquer every last inch of territory allotted to Israel by the United Nations, there was no occupation. In 1967, Israel did not occupy the West Bank or Judea and Samaria and the Arabs were bent on Israel’s destruction. And when Israel decided to voluntarily cede to Gaza to the Palestinians as a trial first step towards peace, we all know what happened – because of the imaginary and nonexistent “occupation”.

“Occupation” has become a code word for Israel-bashing even when it is clearly inapplicable. Surely the Secretary-General knows that, but in his op-ed piece he chooses to repeat that outlandish fiction as the ostensible reason for Palestinian “frustration.”

What Ban feels is his contribution to resolving the Israeli-Palestinian conflict is to ask for “difficult compromises on both sides.” I have a lengthy list of compromises to show him from the Israeli side in the past years, including willingness to give back up to 98% of territories taken after being attacked in a war of self-defense but I defy him to show me even one compromise from the Palestinian side to demonstrate a true desire for peace.

Perhaps most laughable of all is the Secretary-General’s recommendation for Israel to assist Palestinian economic development. This after a recent report showed that the billions of dollars given by foreign sources to Palestinians as aid have been misused to line the pockets of corrupt leaders, to pay bonuses to the families of terrorists as rewards and incentives for future terrorism, to pay for an educational system that instills hatred of Jews and the honor of martyrdom from kindergarten on upwards, to continue to buy weapons and to dig tunnels in the “next war” to finally “liberate all of Palestine.” So Israel should help this program of economic development; sort of a suicide plan for Israel to help pay for its own destruction.

Finally, as anyone who can read between the lines can tell you, one of the most important ways to really understand someone’s views is to focus not only on what is said but what is omitted. Curiously, in the Secretary's very carefully worded essay, he never calls on the Palestinians to recognize Israel.

In a world where ISIS chops off heads, terrorizes citizens in Paris cafes as well as in San Bernardino, where Boku Hiram kidnaps and rapes young girls in Nigeria, where Assad used gas to murder his own people and where Iran continues to develop ballistic missiles, the fact that the United Nations and UN Secretary General Ban Ki-Moon believe that the territories that Israel acquired after being attacked and threatened with extinction are the world’s major problem speaks volumes of the UN's priorities – and dare I say its anti-Israel obsession.

Which is why Ban Ki- Moon still has a long way to go to earn the respect he so much desires as fair-minded statesman and spokesman.