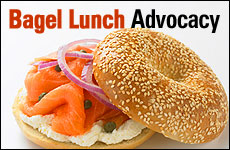 How to motivate Jews on campus.

As president of the largest Jewish student organization on a university campus with an estimated 5,000 Jewish students, I pose the big question to student leaders and staff: how do we encourage, inspire and motivate greater Jewish involvement and leadership? How do we perpetuate the Jewish cause, stop assimilation and ensure Jewish prosperity?

“I have an idea!” a staff member exclaims, suddenly breaking the silence. “Let’s have a bagel lunch!” From the other end of the table, another staff member shouts out, “Great idea! I know a great bagel place!” The meeting proceeds to discuss the details of our ‘strategy’ with great enthusiasm: just how many bagels to purchase, the time and marketing, among other minor issues.

Can a bagel lunch really motivate a Jew to get more involved in his/her community to inquire about Judaism or inspire leadership? I never thought so.

The Jewish people are facing many challenges ranging from anti-Israel sentiment on campuses worldwide, increasing anti-Semitism, and a general lack of interest in remaining Jewish (ie. assimilation). The only way to reverse these trends and attain Jewish prosperity is by inspiring the next generation of Jewish leaders to care about their Jewish identity and take responsibility for the Jewish people. If Jews do not care about ‘being Jewish’, how or why should they care about all the problems facing the Jewish people? All these issues are magnified by the apathy and lack of strategy from those involved in Jewish community who give lip service to the severity of the problems I listed.

A St. Patrick Day Purim Party is not going to be effective in inspiring Jews.

As a Jewish activist on campus and co-founder of the Jewish Business Network, JBN (www.thejbn.ca) that now operates on many campuses in Canada, I have come to the troubling and atrociously obvious realization: the Jewish community is failing.

Bagel lunch advocacy has come to represent ineffective events and uninspiring approaches that turn off so many Jews on campus. Events are organized with the goal of inspiring Jews towards greater Jewish involvement, but they are anything but Jewish. Inevitably, after all the marketing is done, a handful of students show up at lunch, eat some bagels and then everyone leaves. Variations include pizza lunches and non-Jewish events with Hebrew names or just using Jewish themes for something that is not Jewish, like a St. Patrick Day Purim Party.

I do think that there is an inherent value in developing a Jewish social environment. A strong social atmosphere is not only a powerful recruiting tool but can also help build a strong Jewish community. The failure on the part of bagel lunch advocates is that the depth of their strategy ends with the bagels. People forget the end goal in mind or, in many cases, do not identify with the end goal at all. Bagel lunches and their ilk do not lead into anything but a social or ‘cultural’ affiliation to Judaism. We shouldn’t be surprised when Jews are leaving the Jewish community en mass to go to a better party.

The first step is to understand what your target market wants. If you’re selling a product that your target market doesn’t want, you'll fail. After mentoring several Jewish leaders and years of trying to get more people involved in Jewish leadership, I believe I have developed a good understanding of what Jewish students want. I can sum it up with one very loaded word: Greatness. They want success, meaning, happiness, pleasure and all those other cute words we use to describe the ideal life. Even greater is their unquenchable thirst to make a positive impact in the world. We should all take pride in this reality. To think otherwise is quite insulting to every Jewish student on campus.

Jewish students want greatness and to make a positive impact in the world.

Secondly, what is our sustainable competitive advantage (pardon the business lingo – I recently graduated)? If there is nothing inherently valuable about being involved in the Jewish community or being Jewish, then why are we trying to so hard to keep people involved? Every Jew will eventually ask him/herself: why should I be Jewish? And there are two options: There is nothing inherently valuable in the Jewish proposition, in which case we should stop wasting all this time and money on trying to keep people involved. Or there is value in the Jewish proposition, and we need to define what that is.

What unique value proposition do we as Jews bring to the market which allows us to compete?

Is it our culture? There really is no such thing as a “Jewish culture.” Take a traditional Sephardic Jew and an Ashkenazi Jew and their cultures are completely different. Whatever they share in common has nothing to do with culture. In fact, all their differences stem from their culture; it's how we know that they are distinct groups of Jews. I would go as far as saying that those “cultures” mirror the non-Jewish cultures around them more than the other “Jewish cultures” in distant lands. And if you propose that we sell these distinct cultures to distinct groups of Jews, I don’t see how it fulfills the wants and needs of the target market outlined above. I never heard of gefillte fish or fiddle music inspiring someone to be involved Jewishly.

So what else is unique to the Jewish people, connects all Jews, applies to all Jews and meets the wants and needs of the target market? The only answer that I have is: Jewish values, which comes inherently from Judaism itself.

I am assuming that we share the belief that we think that Jewish prosperity is good which would require us to fight assimilation. If there is nothing valuable in the Jewish proposition, then what are we trying to perpetuate? The world does not lose out and we certainly shouldn’t feel bad about the extinction of the Jewish people. If you've read this far, you probably have some interest and care for the Jewish people and, at least, have the desire for our prosperity (not just continuity). If we do offer something valuable, it must be something that is uniquely Jewish: our values.

I’m Jewish because my parents were Jewish and their parents were Jewish and their parent’s parents were Jewish, going back to some point in time where we received the definition of what a ‘Jew’ is. Many would say that this point in time was Mt. Sinai but those who don’t agree with all that “religious stuff” still agree that what bounded us through the ages and separated us from every other nation and peoples was the Torah and the values it taught. The only way the Jewish world can ever compete is if our defining characteristic, Judaism, is valuable. If Judaism is presented as an archaic relic of the past that has no relevance today, then what exactly are we offering the next generation? Is it bagel lunches or fiddlers playing on rooftops?

The only way the Jewish world can ever compete is if our defining characteristic, Judaism, is valuable.

The only reason the JBN has seen any success is because we use Jewish values to inspire students to become activists in their business fields and in their social realms. Judaism is every bit relevant today as it was 3300 years ago and can help anyone achieve success in every aspect of life. The way we encourage and inspire students to become leaders in the JBN is through using the teachings of Judaism. When we teach Judaism, they see how being a Jewish leader is relevant. Judaism and what it has to offer not only meets the criteria necessary for building a competitive advantage but is perfectly designed to satisfy wants and needs of the target market. Judaism has the formula for success in every aspect of life.

I came to this conclusion after spending a lot of time trying to figure out if I should continue being Jewish. The only way I learned the value of being Jewish is by learning Judaism. For those who disagree, I would challenge you to spend some time learning about what Judaism is and try to figure out if it is valuable and worth perpetuating. If you disagree with my proposition but still think it is important to perpetuate the Jewish people, then I challenge you to give me a good reason why it is important and how you plan to solve the problem without Judaism.

When my team of student leaders and I tried to bring more Jews into the community (which we did with a lot of success) through innovative programs, we were met by harsh resistance from the staff of the organization we were a part of. At one point, I was even reprimanded by the Executive Director of the largest campus Jewish organization on campus for “teaching Judaism” and inspiring too many people to be “more Jewish”. I was told that I had to stop; to them it is ludicrous that a Jewish leader should be teaching Judaism.

Bagel lunch advocacy has gotten to a ridiculous point where inspiring Jews is even discouraged. And still, it is the focus and tens of millions are invested each year into organizations where this represents their main strategy. Jews need more than a party or a bagel lunch to justify remaining Jewish today. They need a compelling understanding of what it really means to be Jewish, which comes through a fresh and invigorating exploration of Judaism.

Matan Hazanov is Israeli born and grew up in Toronto. A proud Jew, his first exposure to Jewish learning was in high school and he continued learning on campus with Aish HaTorah. He quickly grew in his Jewish learning and involvement in University through taking on strong advocacy roles in several organizations. As a result of an inspiring trip to Poland and Israel with Aish Hatorah, Matan along with 2 friends, created an organization called the Jewish Business Network, whose vision is to create Global Leaders by teaching Judaism to aspiring business people and inspiring them to become leaders for the Jewish people and make a positive impact in the world with their success. Matan is also an aspiring business leader who has worked as a consulted in business development, commercial banking and involved in various other business projects. Matan is currently learning at Aish Hatorah Yeshiva in Jerusalem. To see more info about the Jewish Business Network, please visit: www.thejbn.ca.