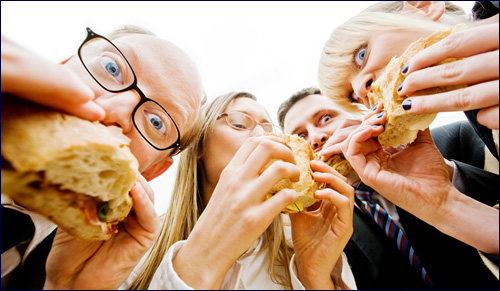 The all-you-can-eat buffet is the only thing on this planet that serves more food than the average Jewish mother.

At many Jewish events (weddings, bar/bat mitzvah celebrations, synagogue dinners, etc.), guests are treated to what arguably is the greatest eating format on the face of the earth:  the all-you-can-eat buffet. It is not uniquely Jewish but it is the only thing on this planet that serves more food than the average Jewish mother. The bottomless buffet is not only a cornucopia of quality consumption but it also is a great place to schmooze, stretch your legs or hide from your significant other.

# Adam and Eve had exclusive access to the first buffet called the "Garden of Eatin'.

Some scholars contend that the buffet has biblical roots and that Adam and Eve had exclusive access to the first buffet called the "Garden of Eatin'."  Other scholars believe that the first all-you-can-eat buffet actually fell from the sky in the form of manna, which kept the desert-wandering Jews satiated for four decades.  A few scholars believe that the first buffet was inspired by the “Miracle of Chanukah” and thus lasted eight straight nights.

A buffet may be an eating bonanza but it can be a bit haphazard too, with many folks cutting the line.  So, the question is: are there rules that should govern buffet etiquette?  To answer this question, it may be easier to specify some of the things a person absolutely should not do when encountering a buffet. For example:

Do not take your chair from your assigned table, drag it over to the buffet and start eating.  That is completely uncouth, undignified and unacceptable, unless the little table card that shows your seat assignment actually reads: "Buffet Table."

Do not come to the buffet with a wheel barrow, a red Radio Flyer wagon or a rolling suitcase in which to load up grub.

Do not intentionally sneeze all over the food in order to territorially stake your claim.

Do not take more than you can eat.  A buffet is all-you-can-eat, not all-you-can pile, lift or carry.

Do not take something, put it on your plate, taste it and then put it back on the buffet. If you don't understand why this is objectionable, then perhaps civilization is not your cup of tea.

Do not attempt to cut a long line at the buffet with a lame excuse like (i) "I just ended a hunger strike," (ii) "My feet hurt from running cross country with Forrest Gump," (iii) "I need to rush back to my table because the conversation is dead without me," (iv) "I'm working security and I’m checking the food for poison," (v) "I just realized that I suffer from food-related macrophobia," (vi) "I forgot to put on deodorant or to rinse with mouthwash so you should be happy to get me off this line as quickly as possible."

Of course, when tantalized by a buffet stocked with loads of edible delights, it can be excruciating to patiently wait one’s turn.  That is why normally reasonable individuals will say almost anything to finesse their way closer to consumption. Here's an example of what you should not do when trying to cut a buffet line:

You:  Excuse me, sorry for cutting the line, but I'm a doctor.

You:  So I need to eat first, in case an emergency occurs.

Them: What kind of doctor are you?

You: Mesozoic anthropology with a focus on the Jurassic period.

Them: Well my dear "doctor," exactly what kind of emergency would you be responding to?

You:  The dinosaur kind.

Them:  Do you really expect this buffet to be attacked by a Velociraptor or a Tyrannosaurus Rex?

You: Well, you obviously haven't met my Uncle Max and Aunt Sylvia.

If you are trying to cut a buffet line, you also should not attempt the following:

Them:  Oh sure, no problem. What instrument do you play?

You:  Instrument? I don't play an instrument

Them: Oh, o.k. Then you must be one of the singers.

You: Nope, I don't sing either.

Them: Are you in charge of lighting and sound?

Them:  But I thought you said you're with the band.

You: I am with the band, the Brotherhood of Aggressive Nudniky Diners, a/k/a the BAND.

Them:  I see. Are you accepting new members?

You:  There's actually a waiting list so, ironically, I guess you'll have to get in line.

Bottom-line: If you have any further questions regarding proper buffet conduct, please direct your inquiries to the Office of Buffet Behavior or to its "Smorgas"board of Directors.