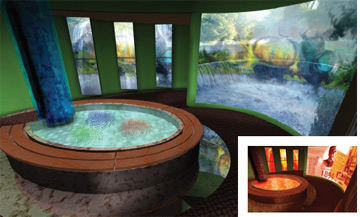 The primary target market for the museum are Jews ages 15 and up, from anywhere in the world. All exhibits will be fully prepared in English and Hebrew, with secondary languages in the future. Due to the high interest anticipated from non-Jewish groups, the visit will be designed to be meaningful for people of all backgrounds and religions.

History of the Site

A series of 3 buildings dating back to the Crusader Period (1065 CE), the site was a gift to Aish HaTorah from the State of Israel, entrusting Aish to exploit the power of this location and build a center that will serve as an inspiration of Jewish pride for Jews from all over the world.

Combining excavated elements dating from the Second Temple, the architecture will combine ancient elements discovered through archeological digs on the site, with the most modern finishes and state-of-the-art electronics.

Aish HaTorah has collaborated with a team of world-class museum designers and entertainment talent to execute this historic project.

This much sought-after creative group is responsible for two of Israel’s newest and most popular sites, the Herzl and Begin Museums. Their Palmach Museum in Tel Aviv is so popular that groups must book months in advance.

The Emoot team, based in London, England, created the Tower of London Welcome Center, the World of Beatrix Potter Attraction, the Tower Hill Pageant and BBC’s FutureWorld.

Better World Productions participated in the development of the New York Skyride in the Empire State Building (winner of best new attraction in New York), the Sydney Tower Skytour, and the Great Australia Expedition.

If the statistics are right, the Jews constitute but one-quarter percent of the human race. It suggests a nebulous dim puff of stardust lost in the blaze of the Milky Way. Properly, the Jew ought hardly to be heard of; but he is heard of, has always been heard of. He is as prominent on the planet as any other people, and his importance is extravagantly out of proportion to the smallness of his bulk.

His contributions to the world’s list of great names in literature, science, art, music, finance, medicine and abstruse learning are very out of proportion to the weakness of his numbers.

The Egyptians, the Babylonians and the Persians rose, filled the planet with sound and splendour; then faded to dream-stuff and passed away: the Greeks and the Romans followed and made a vast noise, and they are gone; other peoples have sprung up and held their torch high for a time but it burned out, and they sit in twilight now, or have vanished. All things are mortal but the Jew; all other forces pass, but he remains.

What is the secret of his immortality?