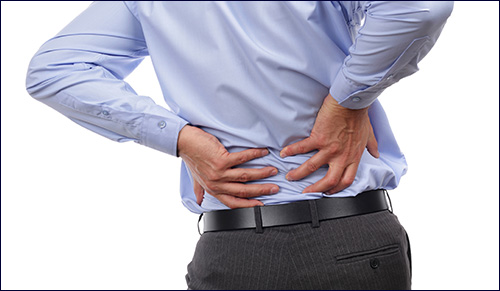 I’ve got back pain so I guess that means mazal tov to me, I am old now.

This week’s article is about lower back pain. Never mind why.

Okay, fine. Apparently, I’m getting to the age where I occasionally do something to my back. This was brought to my attention recently at my parents’ house. It was after Shabbat dinner, and I was on the couch playing a game with my younger siblings, and at some point, I got up to look for food in the fridge. (I’ve been married for a while now, but still, every time I come to my parents’ house, I raid the fridge. OK, to be fair, I raid the fridge in my own house too.) But as soon as I got to my feet, I realized that I couldn’t stand up all the way. Fortunately, my siblings were all very supportive about it.

Lifting my kids can’t help. I know I’m their father, but seriously, they get heavier every year.

“You’re OLD!” they yelled supportively, making sure to be loud in case I was too old to hear them.

They’re always making fun of me for being old, like I should have thought of that before I got old. Back pain is one of the only injuries you can get made fun of for having.

So I tried to retain my dignity by walking off, with the upper half of my body pretty much parallel to the floor. I’m glad I didn’t walk into any walls.

You don’t realize how much you use your back in everyday life. It’s really an “out of sight, out of mind” sort of thing. But judging from the amount of things that I now have to do in slow motion, it turns out you use your back for EVERYTHING.

So I’ve been racking my brain, trying to figure out what I did to hurt my back, mainly because this is one of the few activities I can do without getting up. Was it the way I got up? Couldn’t be. I’ve gotten up from the couch before. This wasn’t my first time.

I’ve also been reading up on back injuries, and there are lots of exercises you can do, using mainly tools that you have around the house. I personally haven’t done any of these exercises, because my back hurts. But I did read that there are right and wrong ways to sit. So maybe it IS an age thing. When I was a kid, I could sit wrong for hours. So maybe that’s finally catching up to me.

I also came up with another theory as to why my back hurt: from lifting my kids. I don’t want to say anything, because I’m their father, but seriously, they get heavier every year. What am I feeding them?

Maybe it’s the way I lift them. A lot of this reading material says that if you want to avoid back pain, you should lift with your legs. See, that’s the thing. They always come up with all these ways to do things properly, but they’re always so awkward. My entire life, I’ve been lifting with arms. I had no idea.

Okay, so I know what it means. Sure, I can lift with my legs, although sometimes my knee hurts, thanks to an injury I got from years of kneeling on the bathroom floor several times a week and trying to convince my kids that I won’t get shampoo in their eyes.

Did I just reference two kinds of pain in the same article? That’s another thing that comes with age. Although I do want to point out that both of them were probably caused by my kids.

So maybe it’s from lifting my kids over my head, even though, if anything, that happened significantly earlier in the day. Apparently, my back is pretty dumb, and it has delayed reactions like that. You’ll do something to hurt your back, and then several hours later, your back will say, “Wait. Did I lift something back then? Ow. Oh, and I’m itchy by the way, but I don’t remember why.” It’s very annoying when you have to figure out why your back is hurting, when it’s not necessarily from something that happened right before it started hurting. It’s like playing detective, but with a back injury.

See, with shin pain, I know. “Why is my shin hurting? Probably because I banged it on the coffee table just now.”

When I finally made it to bed (half of me was already parallel to the floor, so it wasn’t that hard), my wife commented that she’d had that same kind of pain when she was pregnant, which I think is my wife’s nice way of saying that I can stand to lose at least 30 pounds off my stomach region. I think she just doesn’t like that I walk into her in-laws’ house and head straight for the fridge.

So it is my age? My weight? My posture? My kid-lifting? If I had to guess, I’d say it was all those things conspiring at once. That’s how it works. It’s like the time I noticed that, for several weeks, one of my eyelids would occasionally twitch for no reason at all. So I looked it up, between blinks, and it said that eyelids twitch involuntarily for one of three reasons:

And now I’m in a similar position. I’m sitting because my back hurts, but if I sit for too long, my back will hurt more, I’ll gain weight from lack of exercise, and I’ll feel older. So if you’ll excuse me, I’m going to attempt to get up. I hope I don’t walk into any walls.

7 Billion Is Not Enough
The Softball Player
How This 6 Generation Bread Baker Brought Back Israel’s Ancient Grains
Olivia Newton John’s Grandfather was a Nobel-Prize Winning Jewish Physicist
Comments
MOST POPULAR IN Jewlarious
Our privacy policy
Aish.com Is Looking for Great Writers