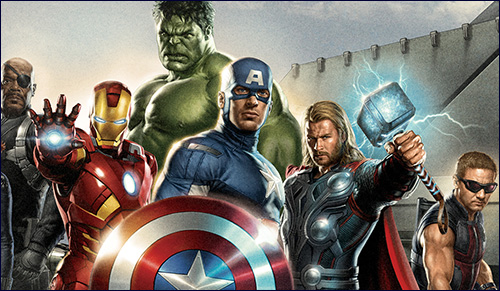 If we don’t pass our traditions down to our children, then all the intelligence is just artificial.

As Avengers: Age of Ultron opens, we see that the Avengers have been, um, avenging things between movies. All our favorite characters are back:

As Jews, how do we carry on our ideals? We have children.

But then Iron Man gets to thinking about the future. To quote Mr. Incredible, “No matter how many times you save the world, it always manages to get back in jeopardy again. I feel like the maid. ‘I just cleaned up this mess!’ Can we keep it clean for ten minutes?” He went up into a wormhole and saw what was out there, and has no guarantee that if the aliens come back in, say, 70 years, he’ll be ready to put on the suit again.

“Isn’t the reason we fight so we can end the fight?” he asks.

So that night, during a party, while Thor is getting everyone, um, hammered, Tony creates an artificial intelligence in his lab. The result is Ultron, a hilarious homicidal robot bent on world peace. But not as we see it.

“I think you’re confusing peace with quiet,” Ultron says. And as any parent knows, quiet moments are not peaceful. They’re suspicious.

NEWS FLASH: Tony Stark is not the best father. He builds his A.I. and is not there for it when it comes into the world. Shouldn’t a father be present when his child is born?

And yes, Ultron is a kid. He has temper tantrums, he refuses to go to sleep, he references Disney movies, and no matter what you do, he’s always on the internet.

In fact, that’s what makes him so difficult to put down. When you destroy his body, he instantly uploads himself into a new one. I on the other hand can’t even surf the web while I’m watching a movie.

Ultron also looks like his father, has his father’s sense of humor, and carries his father’s mindset of hopelessness for the future. And what’s he going to do about this?

“I’m glad you asked,” Ultron says. “Because I wanted to take this time to explain my evil plan.”

Ultron joins up with the Olsen Twins – a pair of enhanced siblings who hold Tony responsible for killing their parents, because apparently his company puts little advertisements on all the missiles they sell the bad guys, to advertise to the victims.

Scarlet Witch shows people their biggest fears, which makes Tony create Ultron, Hulk lose control, and I’m not sure what Thor saw in his vision, but he had to go to the mikvah afterward.

Ultron’s plan is to tear the Avengers apart from the inside, as only a child can do to his parents.

“I know you mean well,” he tells them. “But you just didn’t think it through. There is only one path to peace... your extinction.”

In Ultron’s plan, it doesn’t matter if you’re a good guy. The way to achieve world peace is to kill everyone, even sacrificing people on your side to destroy those who are not. Everyone’s disposable. It’s a very Hamas way of looking at things.

Maybe he’s saving the world, but who’s he saving it for?

The Avengers are later put into a similar position – having to choose between saving everyone in one country or saving everyone else in the world. But they’re like, “Nobody dies.” And when someone does die, they let it motivate them to defeat the bad guy (like in the first movie, when Coulson was dead for an hour).

One of Ultron’s downfalls is he doesn’t really understand the point of personal attachments. There are no strings on Ultron. They’ve all been Photo-shopped out in editing.

How does Ultron have such warped priorities? He has access to all the knowledge in the world; what’s he missing? The answer is that it’s not just about knowledge, it’s also about being taught morality.

People say this movie is a classic Frankenstein story, and it is. But the issue in the Frankenstein story was not that he created a person. Creation is a part of life. Like Ultron says, “Everyone creates the thing they fear. Men of peace create engines of war. Invaders create Avengers. People create… smaller people. Children! I lost the word there.”

The issue was that Dr. Frankenstein created his monster, freaked out, and ran away. He was a deadbeat dad. He left his child, a full-grown adult, to figure things out for himself.

You can’t just create a person as an adult and expect them to do the right thing. They need some time to be taught, to be trained into the world. According to many opinions, Cain was born as an adult. He had no idea how to raise kids and when he killed his brother God decreed that his entire line had to be wiped out. Whereas his brother, Seth (who came after him and Abel), was raised as a baby, and his line survived.

Children take forever to grow up. But this is how it’s supposed to be.

You have to educate your kids. Be a hands-on parent. Judaism is all about being a hands-on parent. No kidding, right? It’s all about chinuch (education) and mesorah (tradition) – teaching our kids our moralities and way of life. Educating your children isn’t about raw knowledge, it’s about values.

The twins were looking for guidance. You can’t blame them, they were robbed of parents at an early age. But they can easily become Avengers if given the right pep talk. Scarlet Witch herself has fears, until Hawkeye, an experienced dad, gives her the talk.

“We’re fighting an army of robots,” he says. “And I have a bow and arrow.”

You can’t live forever, so what do you do? How do you carry on your ideals?

Well, as Jews, we’re the oldest surviving nation. So how do we carry on our ideals?

We have children. That’s what Jews have always been about. Children, and marrying off your children, and “When am I gonna get grandchildren?” They say we’re innumerable, but all the people on earth put together are not innumerable. What makes us innumerable is that we go on forever.

Everything Ultron knows, he downloaded from the internet. And as a result, he has a very negative attitude of humanity. (He must have read a lot of blog comments sections.) Mesorah is about handing things over – passing on tradition from father to son – talking to your kids. You can’t educate your children entirely on electronics. If there’s no mesorah, all the intelligence is just artificial.

“I've got no strings to hold me down,
To make me fret, or make me frown,
I had strings, but now I'm free,
There are no strings on me!”

The Jews live forever, but we’re taught it’s because we have the 3-fold string of our forefathers, passed down from parent to child, teaching us how to live. Whereas Ultron is proud to be wireless. He cut the cord.

But here’s the thing: Strings don’t just hold you down. They also hold you up.

"The Secret" Revealed
It Takes A Lot Of Faith To Be An Atheist
How Instagram Brought Back This Nostalgic Soup
What Makes Eli Run?
Comments
MOST POPULAR IN Jewlarious
Our privacy policy