With his sophisticated, flavorful, and creative recipes, Jeffrey Nathan is one of the most popular chefs in today’s market. His innovative, ethnic-influenced recipes and contemporary presentations appeal to diners young and old. Since its inception in October 1998, Nathan has been the chef-host of public television’s New Jewish Cuisine, the only international gourmet Kosher cooking series, which is seen in four countries and translated into three languages. His cookbooks, Adventures in Jewish Cooking, and Jeff Nathan’s Family Suppers are available worldwide. He is the executive chef of The Abigael’s Group, which includes Abigael’s, and the Green Tea Lounge. At his restaurants, and on his television show, Nathan emphasizes the flavors of modern America while observing the laws of kashruth. He is setting the new standard for Kosher Cuisine with his innovative dishes and presentations. A graduate of the Culinary Institute of America, Chef Nathan is a Culinary Development Consultant for the Hain-Celestial Group, Kedem-Royal Wines Corporation and Allied Old English. Working directly within the research and development branch, Jeff creates many of the new products on the market shelves. An informative and infectiously enthusiastic teacher, Nathan received a James Beard Awards nomination for his work on New Jewish Cuisine for Best National Television Cooking Series. His creative approach to cooking has been enthusiastically received, and Nathan has been profiled in articles in Time, Saveur, Chef’s, Art Culinaire and Food Arts. His Abigael’s acclaim has been noted in the New York Daily News, The Forward, The Jewish Press, The New York Jewish Herald, The Bergen Record, The New Jersey Jewish News, and New Jersey Star Ledger. The Boston Globe and The Milwaukee Journal Sentinel, and several others throughout the nation have featured articles on him. Chef Nathan has appeared on several television programs as a guest chef, including regular appearances on Live with Regis, The Joan River’s Show, Late Night with Conan O’Brian, Roseanne, NBC and ABC News, Martha Stewart Radio, TV Food Network’s The Best Of... Holidays and won their Throwdown with Bobby Flay challenge. 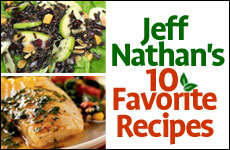 The Jewish Pope: Following the Questions Home
Rosh Hashanah Dictionary
The Meaning of Rosh Hashanah: An In-Depth Analysis
1 2 3 … 168 Next »
Comments