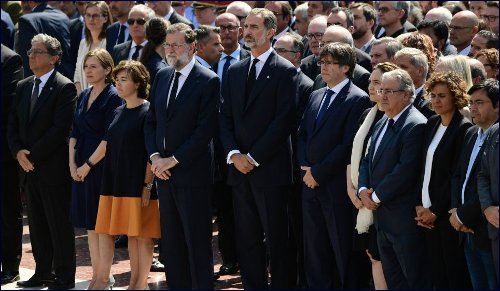 Barcelona’s Chief Rabbi warns his fellow Jews to get out while they can. Not everyone agrees.

After an ISIS-linked terrorist plowed a van into a busy pedestrian area in the center of Barcelona, killing 14 people and injuring over a hundred more, many gravely, Barcelona’s Chief Rabbi warned the city’s Jews to get out while they still can.

“I tell my congregants: Don’t think we’re here for good,” Rabbi Meir Bar-Hen explained after the carnage. “And I encourage them to buy property in Israel. This place is lost. Don’t repeat the mistake of Algerian Jews, of Venezuelan Jews. Better (to leave) early than late.”

All of Spain was shocked by the attack, as well as the announcement by Spanish police that they’d foiled another imminent attack in the popular tourist town of Cambrils. Police later revealed that terrorists had been planning to build a huge bomb to detonate in Barcelona; the explosion of their secret bomb-making factory led the terrorists to abandon that plan which might have resulted in hundreds of deaths.

Calling Spain a “hub of Islamist terror”, he described a country in which radical Islamists were embedded and growing strong.

To Rabbi Bar-Hen, these plots came as no surprise. Calling Spain a “hub of Islamist terror”, he described a country in which radical Islamists were embedded and growing strong. “Europe is lost,” the rabbi warned, and Barcelona’s Jewish community is “doomed”.

Not all of Spain’s Jews share Rabbi Bar-Hen’s pessimism about the future of their community. After the attack, the Federation of Jewish Communities of Spain issued a statement declaring they have “full confidence in security forces who work daily to prevent fanatics and radical Muslims from inflicting pain and chaos on our cities.”

“Barcelona is a city where Jews have been living for one hundred years and of which they are proud,” Victor Sorenssen, a spokesman for the Barcelona Jewish Community, said. “We Jews will not leave our city. We are living a revival of Jewish culture.”

Jewish life has indeed been thriving in Barcelona and elsewhere in Spain in recent years, fed by immigration from Morocco, the Balkans, other countries in Europe and most recently, from Latin America. In 2014, the Spanish Government even took the step of formally inviting back the descendants of Jews expelled from Spain in 1492. Today, 45,000 Jews live in Spain, including about 15,000 Jews in Barcelona, which is home to synagogues, a Jewish day school and even a kosher restaurant.

But even Jews who feel at home in Spain have felt disquiet in recent years, as some Spaniards have failed to condemn or even notice extreme anti-Israel and anti-Jewish attitudes in their midst.

Fully 50 municipalities in Spain have passed BDS resolutions singling out Israel for boycott and censure in recent years. Even though Spanish courts have often struck down these resolutions, Spain has the most anti-Israel boycott resolutions in all of Europe.

Many Barcelona Jews were horrified last April when a Barcelona literary festival invited convicted terrorist Leila Khaled to speak. Khaled hijacked TWA Flight 40 in 1969, and in 1970 she helped hijack EL AL Flight 219. In that case, Khaled worked as a member of Black September, the terrorist group that murdered eleven Israeli athletes at the 1972 Olympics in Munich. Despite her bloody history, pictures of Khaled were hung on Barcelona’s main streets to promote the festival.

Barcelona’s Jews protested, as did the Government of Israel. The President of Spain’s Basque Country Palestinian Community, Fadi Hassan, wrote to the Barcelona Council urging them to cancel the invitation.

Despite these protests, Barcelona’s Mayor Ada Colau Ballano welcomed Khaled to her city – and even led Barcelona’s city council in adopting a resolution condemning “violations of international law” in Israel instead. For Rabbi Bar-Hen, this episode shows that Barcelona’s authorities “do not understand the nature of terrorism...they treat it as an action by the disenfranchised.”

On Friday, the day after the attack, Mayor Ballano urged people to attend a solidarity rally later that day: “Barcelona is a city of peace. Terror will not make us stop being who we are: a brave city open to the world.”

Thousands came. Spain’s King Felipe VI, Prime Minister Mariano Rajoy, and other dignitaries joined a crowd of thousands in the center of Barcelona. Together, they observed a minute of silence. Many of Barcelona’s Jews said they were determined to attend the rally. Victor Sorenssen spoke for many of Barcelona’s Jews when he declared, “Terrorism, with its vile mechanisms of fear, will not be able to defeat us. Barcelona is not afraid, it’s Jews join them in this stance.”

Security personnel told the rabbi they were afraid for his safety should he venture outdoors in the current climate.

Police advised Rabbi Bar-Hen to avoid public areas in the near future. The rabbi looks recognizably Jewish and security personnel told him they were afraid for his safety should he venture outdoors in the current climate.

Barcelona’s Jewish community might be thriving in some ways but the warnings by the police to Rabbi Ben-Har are a warning to all Jews: you are not truly at home here.

The horrific tragedy of the Barcelona terror attack came during a period in the Jewish calendar when we recall the promise of returning to our homeland, Israel. In the rhythm of the Jewish year, summer is a time first of recalling the destruction of the ancient Temple in Jerusalem and our exile from our Jewish homeland. This culminates in the day of mourning of Tisha B’Av when we feel just how far we are from home, and how many generations have been mired in exile, living among hostile neighbors abroad.

We need to remember that outside of Israel we are living in exile.

After this day of intense mourning, we mark seven weeks of comfort, remembering that this exile will eventually end and we will return to our homeland one day. At times, it can seem difficult to picture returning to Israel. After all, so many of us are comfortable. We feel at home in our communities. After 2,000 years, exile hardly seems like exile any more. Until tragedy strikes. Until we find ourselves singled out. Until we’re told that the way we look or who we are makes us different from the people around us. We are reminded that we are not at home here.

Some Jews have dismissed Rabbi Bar-Hen’s warnings that they should think of moving to Israel as far-fetched. But as the threat of terrorism persists, as anti-Semitism increases around the world, I think it would be wise for every Jew to consider his words. Perhaps there is indeed no future here. We need to remember that outside of Israel we are living in exile. There is no denying that fact. It’s time to start thinking seriously that our future – and that of our children – might indeed lie in the Jewish state.

We Have Lost A Father

You Can't Govern From the Grave
For Every Individual, A Torah Scroll
Allegiance To The Monarch
Meet the Real You: Yom Kippur
Comments
MOST POPULAR IN Israel
Our privacy policy
Aish.com Is Looking for Great Writers