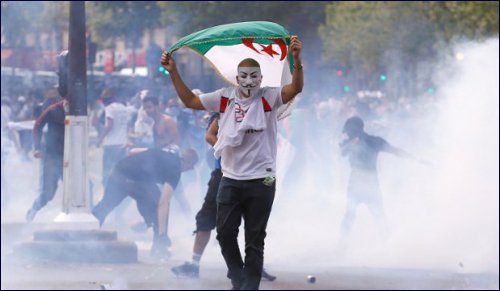 Threats and violence against Jews – ostensibly as protest for the current war in Gaza – have spread to cities worldwide.

When French authorities turned down an anti-Zionist group’s request to march in Paris on Sunday, July 20 – citing a violent protest the previous week in which rioters attacked a synagogue, trapping four hundred Jews inside for hours – anti-Israel protestors announced their plans to march anyway. Their target: the heavily Jewish Paris suburb of Sarcelles.

“We organized… Everybody realized we had to be there,” recounted Marc, a 55 year old Jewish father in an exclusive interview with Aish.com. Given his fear of being targeted, he asked that only his first name be used.

“There were about two hundred of us. We stood around the synagogue, ordinary people, fathers, sons. We didn’t want to fight. We just wanted to say ‘we are here; you cannot be aggressive to us in our synagogue.’”

The Jews formed a ring around the synagogue. Young and old, mostly men but with a few women represented, they guarded their synagogue for hours. “There were a lot of Muslim people protesting Israel at the beginning,” Marc recounts. “The younger Muslim people ran on the street and they screamed ‘Death to Jews.’ They took baseball bats and yelled that they wanted to destroy the synagogue.” As police defended the synagogue, rioters attacked the neighborhood around the building. “They burned cars and threw Molotov cocktails at the commercial area.” The rioters destroyed a kosher grocery store and a pharmacy owned by Jews.

As the riot swelled all around them for hours, with screams “Death to Jews” ringing in their ears, the 200 Jews ringing the synagogue stood their ground. “We sang the French national anthem,” Marc said. “We wanted to tell the Muslims who were rioting, ‘We are not afraid of you. We wanted to send a message that we won’t let you win.’”

Video of riot on Sarcelles:

The riots and anti-Israel protests of recent weeks have been a turning point, Marc explains. He grew up in Tunisia, and left in 1967, when Israel’s Six Day War sparked anti-Jewish riots that drove hundreds of thousands of Jews to leave. “I was very afraid. I remember when I was young and was living in Tunisia…. Muslims wanted to make Jews leave the country. I feel like people want to make me leave France. I felt like I wasn’t at home. I was afraid for my family my children. When they scream ‘Death to Jews’, it makes me feel like Jewish people don’t have a place in France.”

Last Thursday a French Jew was assaulted in his home outside of Paris by a group of 15 men wielding iron bars. His photo had been published on a Facebook page identifying Jews to be targeted for attack. Facebook removed the page on Friday.

Threats and violence against Jews – ostensibly as protest for the current war in Gaza – have spread to cities worldwide.

In Germany, an Israeli couple was attacked and nearly killed when they strolled past an anti-Israel rally in Unter den Linden Boulevard, a major Berlin thoroughfare, on July 19, 2014. Protestors noted the man’s kippah and attacked the couple while screaming anti-Semitic abuse. “If the police didn’t intervene, they probably would have killed us,” the wife said later. 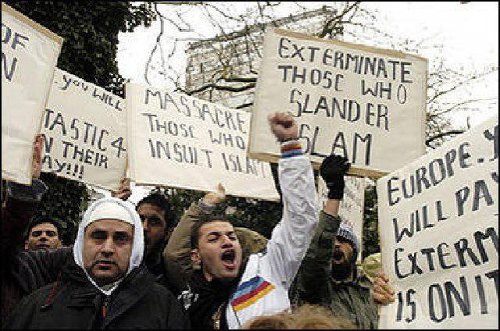 Photo from an anti-Israel rally in London last week.

“They pursue the Jews in the streets of Berlin...as if we were in 1938,” wrote Yakov Hadas-Handelsman, Israel's ambassador to Germany, after the attack, noting that Nazi-era chants and anti-Jewish slurs have made a comeback in today’s protests against the Gaza war. On July 22, 2014 – two days after the Sarcelles riot – German authorities finally banned what has become a popular slogan: “Jew, Jew, cowardly pig, come out and fight alone.” Another staple call at anti-Israel rallies in Germany today is “Jews to the Gas Chambers”.

Political scientist Inna Rogatchi explains that today’s anti-Israel protests are different from those in past years. “What strikes me most is the self-confidence of the demonstrators. Hatred towards Jews is becoming legitimized.” Speaking to Aish.com about anti-Israel protests she has witnessed in the past weeks, Dr. Rogatchi notes “they were so prepared. My impression was they were hardly waiting for a reason to unleash their pent-up rage.” Living and travelling in northern Europe, Dr. Rogatchi notes a change in atmosphere: “The air is thickening. Anti-Semitism is becoming more ordinary in all levels of society.”

Marc in Sarcelles agrees: “Twenty years ago you couldn’t say ‘Death to Jews.’ Now you can say anything.”

The same day I spoke with Marc, a French woman named Claudine Benezra confided in me that something seems to have changed with the current violence in Europe. “These people want Jews and Israel to disappear totally. People say you don’t have the right to live as a Jew.” Although she loves France, she is encouraging her son to leave. “Even in Israel when there’s war - and even if he had to do his military service there – you know they will take care of him as you would take care of him, because they are all Jews.”

The United States has been insulated from much of the extreme anti-Semitism displayed in Europe in recent weeks. But even in the US, anti-Jewish slurs and threats against Jews have come to characterize many protests against the current war in Gaza.

In Boston, for instance, police have had to intervene in three demonstrations, protecting Jews from anti-Israel demonstrators: the most recent, on July 20, 2014 occurred in Boston Common, when anti-Israel protestors pushed and shoved Jews carrying an Israeli flag, screaming “Jews back to Birkenau”.

In Chicago -- my own city -- some local Jews, including a prominent rabbi, were shocked to find leaflets on their windshield in recent days threatening neighborhood violence if the fighing in Gaza doesn't cease. At a nearby amusement park, my son and his fellow campers were asked why they weren't in concentration camps.

This middle-schooler is growing up in a world different from the one many of us knew. Like never before, Israel’s fight for legitimacy, for security and survival, is our own personal fight too.

Those Who Can, Teach6 min read