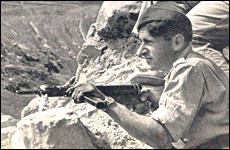 With gratitude to the young men who fought for our freedom.

Route 90 is Israel's longest road, stretching from Eilat in the south all the way to Israel's northern border city of Metula. This year, two weeks before Passover, wanting to enjoy the stunning wildflowers and the wonderful sound of rivers and brooks overflowing after a particularly wet winter, my wife and I abandoned our bleach and shelving paper and headed north.

Now we were on our way back, cruising on Route 90.

About ten minutes out of Kiryat Shemoneh we pass a barely noticeable intersection called Tzomet Koach, loosely translated as "Crossroads of the 28." I make a sharp turn off the highway. A few kilometers from the main road is a place I need to visit: Nebi Yusha, where 28 young Jewish men, including Eliezer, my first cousin's uncle, were killed, on the eve of Israel's birth.

You have probably never heard of Nebi Yusha. It's not a place visited by tourists to Israel; even natives rarely come by. However, the fact that tens of thousands of inhabitants of Israel's north live here, and that all Israelis can drive down the northern stretch of Route 90, is at least partially a result of what happened at Nebi Yusha 65 years ago.

When the British ruled the region known as Palestine, they constructed police forts around the country. Nebi Yusha was one of them. I can easily see its strategic location. From the hilltop fort – now an Israeli border police station – there is a panoramic view of the Upper Galilee and the Hula Valley, and a clear vision of Route 90 cutting through a major portion of the country in both directions. Clearly whoever controlled the fort would determine if the area would be Jewish or Arab.

When the dust had settled, all 22 had been killed by enemy fire.

When the British evacuated Palestine in 1948, Nebi Yusha was handed over to the Arabs. Twenty-two young men, members of the Palmach striking force, were sent to conquer it. Twenty-two youngsters against a fortress of stone.

The goal was to establish a homeland for the Jewish people in the shadow of the all-too-recent Holocaust, and these young men did what they knew had to be done. When the dust had settled, all 22 had been killed by enemy fire. Their bodies were left on the hillside and to the elements.

Two Other Attempts were made to wrest Nebi Yusha from Arab hands. Six more Palmach soldiers were killed, but within a month the battle was won. The Upper Galilee and Metula became an integral part of the new State of Israel. And 28 young men were dead.

After the final battle, the remains of the bodies were recovered and buried in a kever achim, a grave of brothers, on the hillside outside the fort, now know as " Crossroads of the 28." A band of brothers together in life, together in death. 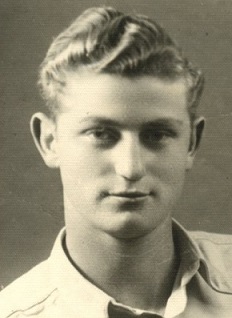 My wife and I stand near the grave where, together with his comrades, my cousin's Uncle Eliezer is buried. Surrounded by the quiet of the forest, we recite Psalms, profoundly moved by the holiness of the place. We read the names on the monument erected as a memorial, and are astounded to discover that Eliezer was only 17. Most of the others were 18 and 19; the eldest was 26.

Yom Hazikaron is Israel's Memorial Day, the day before Yom Ha’Atzma’ut, Israel’s Independence Day. The nation remembers these boys, and the thousands like them, who gave their youth and their lives. But, as my mom used to say, in Judaism there is no Mother's Day: "Every day is Mother's Day."

We cry with the broken hearts of those mothers who sent their sons off, never to return.

Standing by the common grave we realize that in Israel, every day should be Memorial Day. We cry with the broken hearts of those mothers who sent their sons off to defend our land, never to return. And we remember these young men by appreciating and celebrating the legacy they left us: the great gift of Israel.

For some it can be the joy of a homeland teeming with millions of Jews. For others, pride that the country is at the global forefront in medicine, science, technology and, yes, kindness and caring (chesed). For many, the State of Israel is the source of connection to Jewish identity and meaningful spiritual reawakening.

Whatever delights us in this country and its achievements, let us not take it for granted. Let us remember the sacrifice we honor by taking pleasure in Israel's existence.

We Will Remember
Blessing on Chewing Gum
Was Rahab a Prostitute?
Extras In Our Own Epic
Comments
MOST POPULAR IN Israel
Our privacy policy