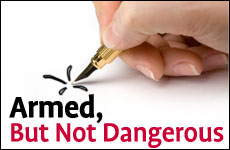 Why do people think I’m a menace?

I'm a mild-mannered, conservatively dressed female, only 5' 3" tall. I don't sport body piercings or carry a weapon. Still, some people consider me a menace.

No one is safe from my insatiable quest to discover the absurd in life.

I have no one but myself to blame for this conundrum. This is because years ago, completely by accident, I became a humor writer. By the time I realized that I was a humor writer both by profession and reputation, I had to hustle to find material. I searched for it everywhere, from the supermarket (an excellent source, especially after they installed talking, self-check out registers) to the shul Kiddush. I began craving ever stronger hits of hilarity as grist for my humor mill, like a junkie. No place or person was safe from my insatiable quest to discover the absurd, the ironic, and the just plain funny things that happen in life.

A few friends were becoming skittish, as I learned while a guest at a sumptuous Shabbat dinner. We were in the midst of a lively conversation when my host suddenly froze, his soup spoon poised halfway between the bowl and his mouth. "Is this dinner going to end up in one of your columns?" he asked.

"It's too soon to tell," I said, cagily, hoping someone would commit a memorable faux pas. "I should know by dessert."

I detected a subtle grimace, as if his soup had lost its flavor. Please don't misunderstand: I never actively look for material on Shabbat or holidays, as that would be “working,” but if I run smack-dab into something with rich amusement value, it immediately gets filed in the cerebral cortex comedius, where it remains for safekeeping.

Fortunately, more of my friends like it when I write about them. Years ago, when I had hit rock bottom in my organizationally challenged lifestyle, I hired a friend to help dig me out of my embarrassing clutter. My feeble excuse, "I'm not messy, I'm a genius!" held no water with her. As she made order out of my chaos with color-coded labels and a novel concept called a "system," I grappled with my feelings of utter inadequacy and shame by writing about the encounter. I changed her name in the story because I poked fun at her perfectly organized everything, including her car, briefcase, hair, and even her expertly painted, evenly grown nails. How did she keep them like that with six small kids? Despite my poking fun, she was thrilled, and handed out copies of the story to clients as a marketing tool. I should have asked for a small commission.

But no column, even if it's funny enough to make people accidentally snort their drinks up their noses as they read it (a peculiar compliment that only humorists tend to appreciate) is worth hurt feelings. If I have any doubts that “using” my friends might cause injury, I show them a draft first and ask permission, explaining that I may have exaggerated a wee bit on certain details for dramatic effect. After all, competition for the fast-eroding human attention span is fierce, and I need to keep readers’ eyes glued where I want them, on my copy, and not back to their emails.

Trafficking in human foibles raises more suspicions among those who don’t know that I’m actually nice, at least when I’m not skewering life’s more absurd moments and people. Once I was introduced to a couple at a community fund-raiser. When the husband heard my name, he said, "You write about your kids a lot, don't you?" It didn't sound like a compliment. I fessed up, but proudly asserted that I was on good terms with all my kids, and not only when they need cash.

Few sights are sadder than a humor columnist without a family to exploit in plying the trade. Once I met a well known humorist at a writers’ conference who had written a best-selling book about his family. He told me that he was getting divorced, and my heart sank for him. What in the world would he write about now? I wondered.

I am grateful that my mishpacha has gone along so sportingly with all of this, though they are often taken by surprise. My daughter was miffed to discover I had written about the time she baked a coffee cake and poured in an entire cup of instant coffee in the batter when the recipe called for a cup of coffee. She had warned me not to, but I couldn’t resist. Material like that doesn’t fall from the sky every day. However, this may also explain why all four kids have their bags packed for seminary or yeshiva within minutes of high school graduation, 11,000 miles from my prying eyes and ears. I think it's a darned shame to let kids leave home while they are still providing rich humor material, just being their delightfully interesting selves.

Writing humor is a quintessentially Jewish activity, because it requires that we look for the good even in life’s most trying situations. For example, when I discovered that my car had been mercilessly towed away exactly three minutes after the "no parking" time had begun, writing a column about it was cathartic. I got three columns out of our nightmarish bathroom remodel saga, perpetrated by a clan that would have made the Three Stooges look like engineering geniuses. Payment for those columns barely covered the cost of one letter written by my attorney to the Stooges, but writing them was cheaper than therapy.

I love it when I write a column and people tell me they are sure I was writing about their lives. "We must be long-lost sisters!” is a message I’ve been delighted to get via email. “I am so relieved to know I'm not the only one who has an 11-year-old who still eats with his fingers," a friend from shul once confided to me. I patted her on the shoulder and said, "I feel your pain."

I’m unlikely to laugh all the way to the bank writing humor, but making people laugh, even if only for a few moments, is a small gift I can offer. Finding the funny in the frustrating helps us keep our perspective, because let’s face it, things could be always be worse. Besides, laughter isn't a luxury – it's a life tool to see us through the difficult moments, whether when bad contractors happen to good people, when the agents at the TSA confiscate your kosher eats before boarding a long flight; or when your husband makes the mistake of parading around in his wedding pants 25 years after the wedding to announce, "They still fit!"

So for those of you who fear me, please relax: I may be armed with an observant eye, but I'm not dangerous. Usually.

Other American Things Moving to Jerusalem

Are Jewish Stereotypes Funny? Part 3
It Takes A Lot Of Faith To Be An Atheist
How Instagram Brought Back This Nostalgic Soup
What Makes Eli Run?
Comments
MOST POPULAR IN Jewlarious
Our privacy policy